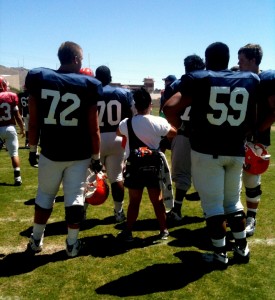 Women working in all-male sports learn to adapt and flourish

EL PASO – I stand on the sidelines of an XXL world filled with, size-17 shoes, and giants battling for a pigskin ball in a field of blood, sweat, ice and medical tape, one of a few women allowed in the center of the turmoil. There are very few women involved in the male maelstrom, whether it is college football or in the NFL. Having a passion for the game and also being involved in the media aspect, I have seen that women are undervalued in the world of men’s sports. “Have you ever noticed those female sideline reporters the networks employed for NFL games? And have you ever noticed they’re all a bunch of ignorant bimbos that wouldn’t know a football field from a cornfield without a man pointing them in the right direction ” said comedian Norm McDonald while imitating Andy Rooney.