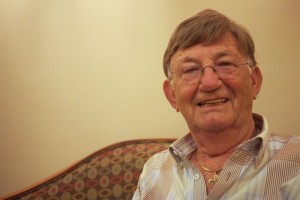 EL PASO – Loud demanding voices in the darkness of the early morning disrupting too few hours of sleep and waking to find that the man next to him is now a corpse mark the start of another stressful day in the Nazi concentration camp. Hunger pangs continually tear at his stomach as he labors in the ever-present bone-chilling cold that cuts through the filthy rags he wears. These are some of David Kaplan’s childhood memories. “Families were torn apart, you never knew when it would be your turn to die,” said David Kaplan, 82. He told journalism students at the University of Texas at El Paso that he felt lucky to have survived the hell he fell into when he was only 11 years old.

EL PASO — Seventy years ago the life of a 12-year-old Jewish kid from Lithuania completely changed when he was forced to fight for his survival in Nazi concentration camps and finally battled his way through the final Death March as the war ended. Today that boy is a successful businessman living in the border region of El Paso, TX, and he continues drawing strength to share his inspiring story of survival and forgiveness with the community who gathered along with family and friends to commemorate his 82nd birthday. On August 28, 2011 the Holocaust Museum here presented Kaplan’s memoir, I Forgive Them, which he wrote with the help of David Smith-Soto, a journalism professor at The University of Texas at El Paso. In it Kaplan tells the story of his four years of struggle during World War II. At the event Kaplan and Smith-Soto were interviewed by Darren Hunt, host of ABC-7 Xtra, about the book’s meaning to them.

A child in the Nazi concentration camps survives by his wits