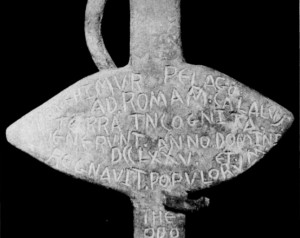 Did Europeans settle in the Arizona desert thousands of years before Columbus sailed to America?

EL PASO – In our modern world we tend to think of stories of pygmies and giants, dragons and the wee people, hidden treasures and mysterious lost cities as fairy tales and bedtime stories, but these yarns have roots deep in the distant history of the American Southwest. Almost 500 years before the arrival of Christopher Columbus, Leif Ericson explored the land west of Greenland and established a small settlement. More than 300 years before Columbus landed in Santo Domingo in 1492, a Welsh explorer navigated up Alabama’s Mobile Bay and established European styled fortifications and settlements as far north as the Ohio Valley. But perhaps even they weren’t the first to come to the new world. Roman Christians may have established a colony on the outskirts of what is now Tucson, Arizona as far back as 775 A.D. Unfortunately, mainstream archeology and academia have dismissed these discoveries as either hoaxes or simply as unworthy of discussion.