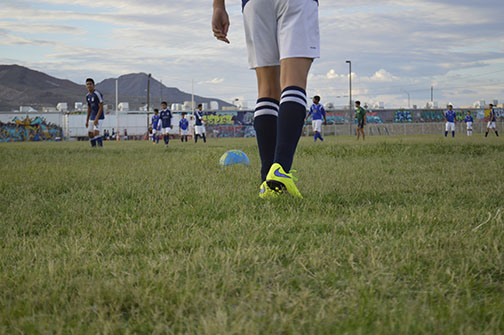 EL PASO, TEXAS– What started as a six-month assignment for Englishman Simon Chandler in El Paso some 20 years ago, evolved into a long term love affair with border culture and resulted in a soccer team for the city’s oldest immigrant neighborhood, Segundo Barrio. “When I first came here I wasn’t too keen on it,” said the 47 year old Chandler, whose first volunteer job in El Paso was at the immigrant advocacy organization Annunciation House.  “But I think what I’ve liked is the Mexican culture.”

A native of Marlborough, England who played soccer as a young man, Chandler said six years ago when he began looking for an opportunity for his son to play the sport he was surprised to learn there was no boy’s team in Central El Paso. Undeterred, he began coaching soccer at La Fe Preparatory School but soon realized there was a need for a  team for the entire Segundo Barrio community. “I would always have kids (from the neighborhood) coming up and asking me if they could be on the team,” said Chandler, who now teaches second grade at the bilingual Hart Elementary School.