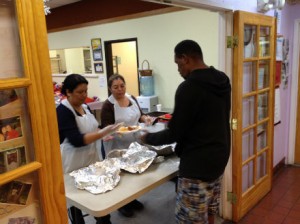 EL CENTRO, Calif. – Sitting among the hundred or so people in the large hall at Christ Community Church’s Kitchen with a Mission, Wade Hensley, 45, and Eva Morales, 32, wait at a round table littered with half-full plastic cups of red-colored punch, with their 6-month-old daughter cradled in Eva’s arms and their three other kids playing in a room next door. This is a typical Friday evening for Hensley and Morales, a common-law couple of seven years, who were once homeless for six months, then lived in an RV for almost two years before renting an apartment just down the street from the church that they frequent every week because feeding a family of six on food stamps isn’t enough. “We run out of food sometimes,” said Hensley who is disabled with a herniated disc in his back. “We just have to budget for it.”

Friday meals, weekly hot lunches and holiday dinners are among the services utilized by 21,000 Imperial Valley residents who are hungry.  However, the Imperial Valley Food Bank estimates that local food insecurity affects about 50,000 people, roughly 31 percent of the county’s population; and the numbers have nearly tripled since 2008.