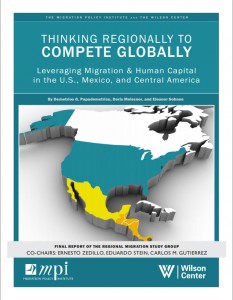 WASHINGTON — Amid powerful demographic, economic and social forces reshaping Mexico and much of Central America and newfound momentum for reform of the U.S. immigration system, the countries of the region have new avenues to improve opportunities for their own people and strengthen regional competitiveness with new collaborative approaches on migration and human-capital development, an influential task force convened by the Migration Policy Institute (MPI) and the Wilson Center concluded in a final report issued today. The Regional Migration Study Group, co-chaired by former Mexican President Ernesto Zedillo, former U.S. Commerce Secretary Carlos Gutierrez and former Guatemalan Vice President and Foreign Minister Eduardo Stein, outlines a forward-looking, pragmatic agenda for the United States, Mexico, El Salvador, Guatemala and Honduras over the next decade and beyond. The report, Thinking Regionally to Compete Globally: Leveraging Migration & Human Capital in the U.S., Mexico, and Central America, caps a 2 ½-year initiative that focused on extensive consultations with policymakers and civil society in the region; produced more than two dozen research reports, policy briefs and briefing papers; and involved extensive deliberations by Study Group members. The final report offers 14 findings and recommendations for policymakers in the region, some focused on the current U.S. legislative debate, others directed at Mexico and Central America. The report notes that there have been no systematic conversations about what a regional approach to migration might look like since discussions initiated by Presidents Bush and Fox were derailed by the 9/11 attacks.