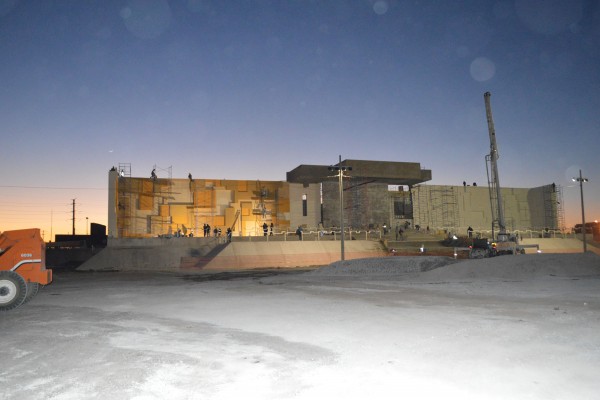 Juarez Bishop José Guadalupe Torres Campos last week from his office in the central part of the city spoke candidly with a group of student journalists and media professionals about his expectations for the historic visit of Pope Francis to the borderlands tomorrow. Foremost in his mind is his hope that pontiff’s one-day visit and message brings healing to the violence-ravaged border city. “The country continues to bleed in a fight that is so cruel and absurd,” said Torres Campos, who expects that Pope Francis, during visits to a prison and school before celebrating Mass at the former Estadio Olímpico Benito Juárez tomorrow, will address many of the troubling social, economic and political ills plaguing Ciudad Juárez and the border region. Workers have spent the last two months building an altar and podium constructed of local granite mined from an area called Cerro Bola above the Juárez gray-and-brown jagged mountains that surround the city. The pope will celebrate Mass from this location.