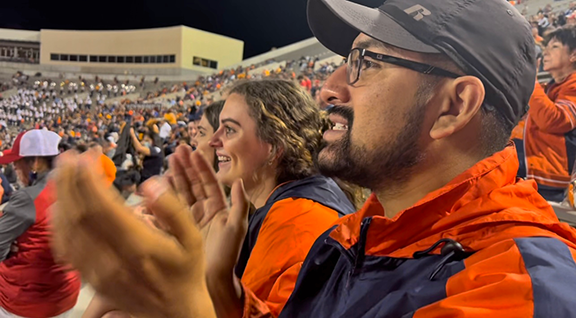 The 2019-2020 sport season in the El Paso was an unusual year for many sporting teams as many of them did not know the status of their game’s week to week. Many games had to be canceled or postponed due to the rapid growth of cases in the community or due to one of the players on the teams contracting the COVID-19 virus. If games were allowed to take place, they were limited to a few fans or a few parents of the players themselves, with most of the games allowing no fans at all.

The sport of football in El Paso specifically suffered due the pandemic. Many important games had to be canceled, including several key playoff games for high school teams around El Paso. The UTEP Miners football team had a total of four games canceled during the 2020 season. Which included games against FIU and three back-to-back games against UAB, Rice, and Southern Miss. All games were canceled due to either contract tracing, one or more players on the teams contracting the virus or COVID-19 causing the teams to suspend activities.

As the number of vaccinations have gone up, more and more events have been allowed to take place and the world has slowly stated to get back to normal. The 2021-2022 sports season in El Paso has thus far benefited from these changes in the pandemic, with many sporting events allowed to have 100% of fans in attendance, with little to no cancellations.

In June 2021, UTEP Director Of Athletics, Jim Senter announced that sporting events during the 2021-2022 season would return to 100% capacity.

UTEP student and fan Kobie Payan, who attended the UTEP Miners vs New Mexico Lobos football game on September 25, appreciated being able to attend a football game after an unprecedented season the year before.

“It feels great, I think at the end of the day, just being there in the stadium gives you a good energy,” Payan said. “Especially when you are cheering on your home team, and you want them to win and you also have everybody backing you up. Last year I just remember watching TV and watching the games through the TV and only having my family around, but it’s good to have other family, UTEP family around me, so I think it’s really good.”

“I don’t have too much of a worry about anybody else, I stay at a pretty far away distance from everybody, so I don’t mind, I like everybody to have fun and at the end of the day we are rounding about and getting to normal times”.

The game in which Payan attended on September 25, according to ESPN, had a total of 15,069 people attending, which made up about 29% of the 51,500 fans that the Sun Bowl Stadium can hold.

After a year of uncertainty and cancellations, the sports world seems to be finding some sort of normalcy. Sports fans say they will continue to attend sporting events as long as they are able to still keep a good distance from everyone else and COVID-19 cases don’t once again hit a boiling point