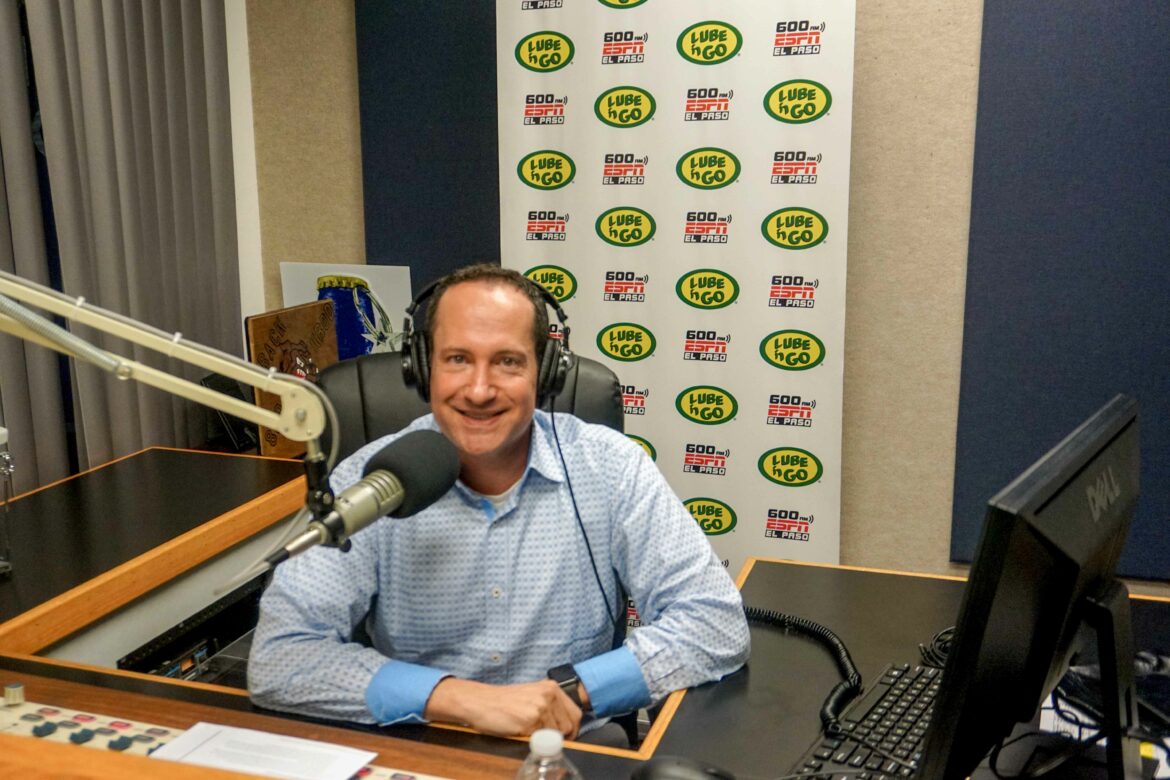 For the past 24 years, Steve Kaplowitz has been the host of the longest running sports talk radio show in El Paso – Sports Talk on 600 ESPN – and he has plenty of great memories to show for it.

In 1978 Kaplowitz’s family moved from Long Island, New York, after Kaplowitz’s dad received an opportunity to be a manager for Schaeffer Pens at its El Paso location.

Kaplowitz’ family became season ticket holders to UTEP basketball games and he he has many fond memories of watching the Miners play under UTEP coaching legend Don “Bear” Haskins.

“A lot of people here today do not realize that UTEP basketball was the thing,” Kaplowitz said. “Those were must-see games. Sellouts were a regular thing, there was a demand that you would not believe.”

After attending Coronado High School, Kaplowitz attended the University of Texas at Austin. While at the UT, Kaplowitz approached the student radio station about doing a sports talk show and ended up doing a show at the station for three years.

Kaplowitz began working at KROD radio in El Paso in June of 1995 as a board operator while also doing some sports for KLAQ. In October of 1995 Kaplowitz helped launch the weekend show, Crunch Time. Two years later fate intervened with KROD losing the UTEP basketball contract, which led to a lineup change at the station. Jon Teicher, current assistant athletic director of UTEP and voice of Miner basketball for the past 40 years, departed the station to continue calling the UTEP basketball games. In July of 1997 Kaplowitz took over as host of his current radio show, Sports Talk. KROD is an affiliate of ESPN radio.

Kaplowitz spoke about some of his favorite moments during his time as host of the show and premier among them was his time working with UTEP coaching legend Don “The Bear“ Haskins.

“Haskins befriended me when I was young and just getting started. We developed a great relationship,” Kaplowitz said. “Even years later when he retired, we started doing a radio show together for three years. He was an amazing individual. I always kind of considered Don Haskins to be the grandfather I never had.”

Talking about the current relationship that many coaches have with the media, Kaplowitz talked about how social media has changed the dynamic of sports.

“It’s more competitive now than ever and everybody want to be first, everybody wants to break the scoop with so many media outlets currently,” Kaplowitz said.

James “Pinky” Arrieta has been a fan of Kaplowitz’s show from the first day it was broadcast.

“He keeps us more informed with his range of topics and accommodating to the listeners,” Arrieta said. “He really wants the listeners to get involved. Steve uses any type of media he can get a hold so the public can interact with him. The ESPN 600 phone App has made his show more accessible from anywhere in the world.”

Sal Montes a board operator and producer for KROD 600 talked about his impression of Kaplowitz as a radio host.

“One of the things that makes Steve bigger day by day is he just doesn’t stop,” Montes said. “He is consistently putting out content. Any kind of interview no matter the profile of the guest he is going to be ready. Listeners are consistently calling in to just compliment him on his questions he asks.”

When the COVID-19 pandemic shut down sports across the country, Kaplowitz talked in 2020 about his challenges and approach to keep his show relevant during the trying time.

“It was tough, when there were no sports for months and months,” Kaplowitz said. “We never really had to hurt for material. It did allow us to take all these old Don Haskins radio shows from 2006 to 2008 and rebroadcast them for the first time since their initial broadcast years ago.”

The original shows were on cassette so they had to be digitized to bring to a modern audience. Kaplowitz talked about the great memories that it brought back to listeners as well as introduced Haskins to a new audience.

Kaplowitz was inducted into the El Paso Sports Hall of Fame in 2013 for his contributions to the sports scene in the city. He said the greatest part of being inducted was that he joined his late father, Joel Kaplowitz, who was inducted posthumously in 2008 in this prestigious honor.

“I have tried to be the same person on the radio today as I was when I first started,” Kaplowitz said . “Someone that people could feel comfortable turning on their radios at four o’clock and listening to talk and engage them about sports. As long as I can keep doing that and make people feel good about sports in general, I feel like I am doing my job.”

Michael Cuviello served on the fall 2020 staff of Borderzine. He earned his degree in multimedia journalism from UT El Paso,.