The number of sexually transmitted diseases cases in El Paso have jumped 30 percent from 2010 to 2018, prompting El Paso Department of Public Health officials to call for more screening and testing.

Additionally, the number of cases of syphilis, chlamydia, and gonorrhea spiked as well during the first three months of 2021 – in part due to the COVID-19 pandemic, health officials said. 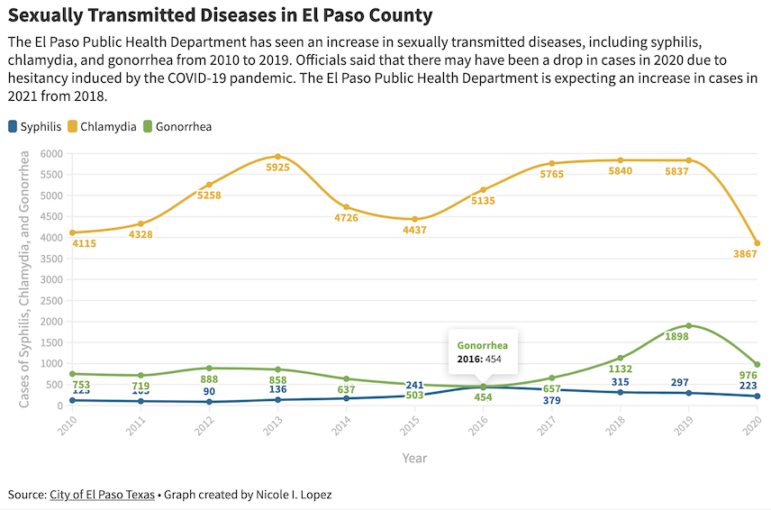 Heather Sheppard, clinician specialist at the El Paso Planned Parenthood Health Center said official figures might be undercounting the number of STD cases in El Paso County from 2020 to 2021.

“Healthcare experts are concerned that many STDs may be spreading unchecked and untreated along with cancers, heart disease, diabetes, and other health issues not being addressed during the pandemic,” Sheppard said.

The Center for Disease and Control and Prevention reports that about 20 million new STD cases on an annual basis in the United States. A study from County Health Ranking and Roadmaps show that there are 606 new STDs every year, on average, in El Paso County.

The CDC defines syphilis as an STD that is divided into four different stages. For every stage, there are different symptoms and the disease can worsen if left untreated.

Chlamydia is an STD that can infect both men and women and can have serious repercussions on a woman’s reproductive health. It can also cause complications when a woman is trying to conceive.

Gonorrhea is an STD that infects the throat, genitals and rectum. It is a common STD found mostly in young adults, ranging from ages 15 to 25. 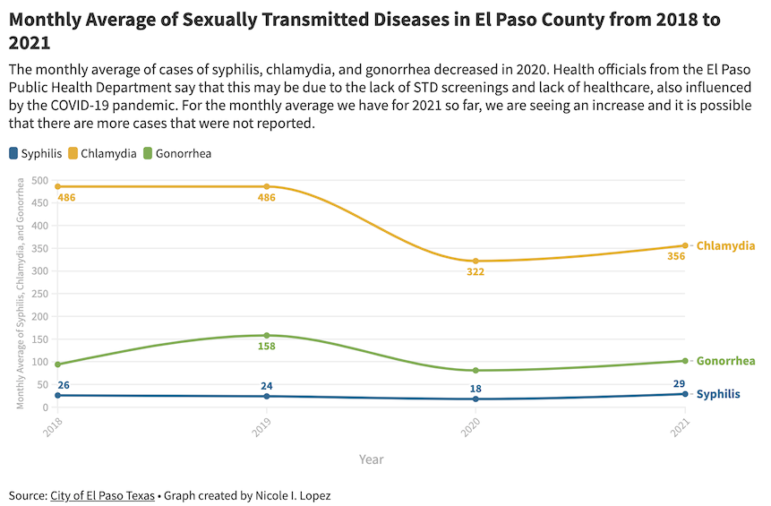 Although there was a drop in syphilis cases from 2018 to 2020, in 2021, the average has risen. The monthly average between January, February, and March of 2021 is 29 cases, which has increased dramatically compared to the previous year.

El Paso health officials said that STD rates may have risen in 2021 due to a lack of STD testing since 2020 when COVID-19 cases broke out in El Paso.

“STD testing decreased during the first year of the pandemic,” Mora said. “Decrease may be attributed to limited access at testing facilities and the public’s reluctance to seek medical care due to concern and fear of contracting COVID-19 in public places.”

The rise of STDs in El Paso, specifically syphilis, has been seen the most among pregnant women, a news release from the El Paso Department of Public Health said.

Syphilis can be passed onto the baby if the condition is left untreated. People with STDs may not always experience symptoms, which is also why people may not be getting tested. If these conditions are left untreated, people are more at risk for contracting HIV infection and experiencing chronic pelvic pain, pelvic inflammatory disease, infertility, newborn complication, and infant death.

The news release said that under the Texas Health Code, pregnant patients are required to be tested for STDs during their first and third trimesters and when they are going to deliver.

The El Paso Planned Parenthood Health Center said that in addition to the limited access to STD testing, people may not have the means to access sexual reproductive health care.

“Reduced access to affordable reproductive healthcare is thought to be a leading factor in rates going up, along with the stigma about how too many people feel about addressing common and important sexual health issues, and poor or no quality sexual education available for young people about how to protect against STIs (sexually transmitted infections),” Sheppard said. “Teens and young adults are the highest risk age group for STI transmission.”

The news release also said that the decrease in STDs in 2020 may be due to hesitancy and a delay in seeking timely medical care during the pandemic, Mora said.

The El Paso Department of Public Health has increased its clinical services by 75% to encourage STD screenings, a news release said.

Planned Parenthood also is urging people to set appointments for reproductive health, including STD/STI testing and screenings for breast cancer, cervical cancer, and gynecological cancers. Planned Parenthood offers immediate medical treatment and referrals to additional care for those who do test positive for an STD or STI and for their partners if they also test positive.

“By treating both partners at the same time we reduce transmission and re-transmission for that infection,” Sheppard said. Planned Parenthood offers financial plans to help patients pay for medical care.