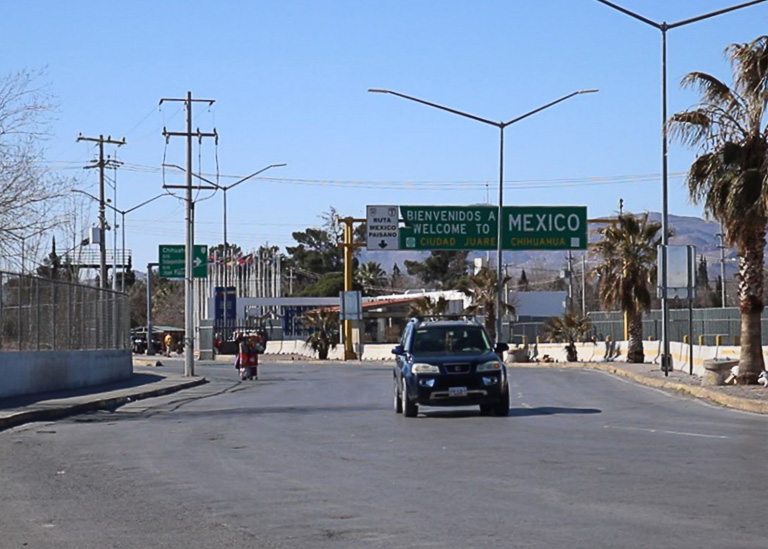 A single car on its way to cross to the United States through the Bridge of the Americas in Ciudad Juárez, Mexico. A sign welcoming travelers to Mexico can be seen on the other side of the street. Photo credit: Marisol Chavez

CIUDAD JUAREZ — Before border pandemic travel restrictions, shoppers from Mexico crossed daily. But during the pandemic more been forced to turn to others to get the products they want or need from the U.S. side of the border.

For more than a year, the border between the U.S. and Mexico has been closed to all non-essential travel in an attempt to stop the spread of Covid-19. Some U.S. citizens and legal residents are still going back and forth because the authorities can’t keep them from returning home from Mexico.

Mexican citizens with border crossing cards or visas though are only allowed to visit the U.S. for reasons that are essential including work, school or medical appointments. Shopping is not considered on the essential list.

Those who can rely on friends or relatives to but others are turning to passadores or cruzadores, U.S. citizens or legal residents who can cross back and forth and will shop for others in Juarez for a fee.

“A month after crossings were restricted I began crossing again and doing favors for friends,” said Samantha Camacho. She’s a U.S. citizen and University of Texas at El Paso student.

Camacho saw a business opportunity and after making several trips for her friends, she realized a lot of people needed someone who could buy groceries from stores like Walmart and Sam’s Club.

Hot Cheetos, sweets, cereal, laundry detergent, and milk are among the items that shoppers insist on buying in El Paso through “pasadores” not only because certain items are only available in the U.S., but also because some things are cheaper and, according to Mexican shoppers better quality and taste.

Even though it all started as favors from one friend to another, she later began to charge a fee for every trip. The fee, she says, depends on the number of products she picks up and their size, but it’s usually around five and 15 dollars.

“I was spending on gas and sometimes I would only cross for that, so I told them the fee was to cover gas and for doing them the favor, because I was using my time,” Camacho said.

Camacho has a job caring for the elderly El Pasoans, but the money she makes shopping for others has been an important source of additional income since the hours at her job were cut because of the pandemic. Although the fees she charges don’t make up for the portion of the salary she lost, the extra income helps pay for gas.

She also makes money picking up packages sent to P.O. boxes in El Paso. That remains the top errand she runs for Juarez residents.

The border pandemic travel restrictions benefited her economically, but she wants them lifted as soon as possible even if it means losing extra income.

“They were good to stop the spread of the virus, but I would definitely not want the border to be closed forever,” Camacho said.

Pamela Quevedo is another entrepreneur who started an online shop when the pandemic restricted border crossings.

The 18-year-old architecture student in Juárez created “Whim-is” using Facebook and Instagram to sells products from the U.S.

“Anything you can find in the U.S. I can bring it to Mexico,” Quevedo said.

Quevedo is not a U.S. citizen, so she cannot cross the border to buy the products available in her shop herself, but she relies on her friends and family that can cross to supply her business. She sells the products in Juárez, with available shipping for customers anywhere in Mexico.

Quevedo was inspired to create her shop after she repeatedly asked her friends for favors to get what she needed from El Paso.

Thinking there must be many like her in Juárez,who want certain products from the U.S. but cannot get them she stocked up on popular items. including snacks.

Her bestsellers are snacks, with Flaming Hot Cheetos topping the list. She showcases those snacks on on different social media platforms including Facebook, Instagram, and even TikTok.

Conscious that after the border reopens her online shop “Whim-is” will not be needed as much in this Mexican border city, Quevedo plans to move her business to another city.

“I hope to open a physical shop in Chihuahua and to deliver everywhere in Mexico,” Quevedo said.

With no clear answer for when the border will open to non-essential travel again, entrepreneurs and “pasadores” deliver a taste of normalcy for clients in Mexico. Even during the pandemic the fluidity of the border has not come to a halt. Borderlanders, Fronterizos, always find a way to adapt.