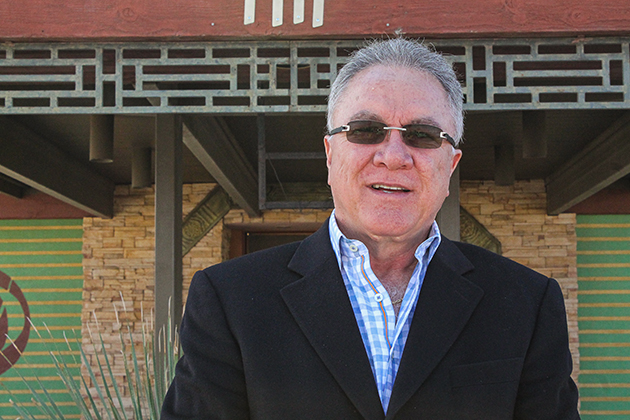 Francisco "Paco" Wong speaks about his family's history in the region

El PASO – Chinese immigrants have a rich history on the border that is often overlooked or left to individual families like the Wongs to try to preserve.

“My grandfather was from Guangzhou, China. He moved to Mexico in the early 1900’s,” said Francisco “Paco” Wong, 62, owner of Paco Wong’s restaurant in El Paso. “My grandfather died in 1937 when my father was only ten years old. (His death) was the first strike on my family’s Chinese culture.”

Wong has family ties on both sides of the border and relatives who have created their own fusion of Mexican and Chinese culture even as they tried to maintain contact with relatives back in China.

“My uncle, my grandfather’s brother, continued to stay in touch with my grandmother and the kids,” Wong said. “Keeping (our) tradition was hard. Basically, my father had to create his own Mexican-Chinese traditions by himself.”

This inspired his father, Fernando Wong, to open the Shangri La restaurant in Ciudad Juarez in 1960. The restaurant celebrates its 60th anniversary in September.

“In the early years he was the pioneer of the Chinese (food) industry. People used to go from El Paso to Juarez. It was very popular in El Paso with the older generations,” Wong said.

Shangri-La became a gateway to understanding Chinese influence. But growing up Wong said rumors were also part of local lore about the border’s Chinese immigrants.

“I lived in Sunset Heights for about 20 years and there are a lot of rumors of tunnels that the Chinese immigrants used to live in,” he said.

He followed in his father’s footsteps and opened his own restaurant, Paco Wong’s, in El Paso in 2006. The COVID-19 pandemic has disrupted business and forced Wong to close the restaurant temporarily. He has shifted to providing take out orders with curbside service.

The impact of Chinese immigrants in Texas

Wong’s family and others are part of a resilient, hardworking Chinese community that was the largest in Texas during the early 20th century. Many immigrants opened stores, worked for railroads and did other jobs to send money back to their families in China.

“I would call it like one of those hidden histories that we have,” said Stephanie Gardea, education and curatorial associate for the El Paso Museum of History.

“Starting with some of the first neighborhoods here in El Paso with the Chinese immigrants and how a lot of these immigrants played a role in building the railroads and how they immigrated here through the U.S. Mexico border because of the Chinese Exclusion Act are all a part of these larger histories that people don’t really realize played a part in our history,” she said.

Congress passed the Chinese Exclusion Act in 1882 to prevent Chinese laborers from immigrating to the United States. It was the first federal law explicitly suspending immigration of people of a specific nationality and was repealed in 1943. Chinese immigrants have faced discrimination on both sides of the border.

But there’s a new effort to spotlight Chinese culture in El Paso. In January the El Paso History Museum hosted a Lunar New Year Celebration and plans to make it an annual event.

“It will be nice if it can become a tradition,” Wong said.

Michelle Rosada is a May 2020 graduate of the multimedia journalism program at UT El Paso.