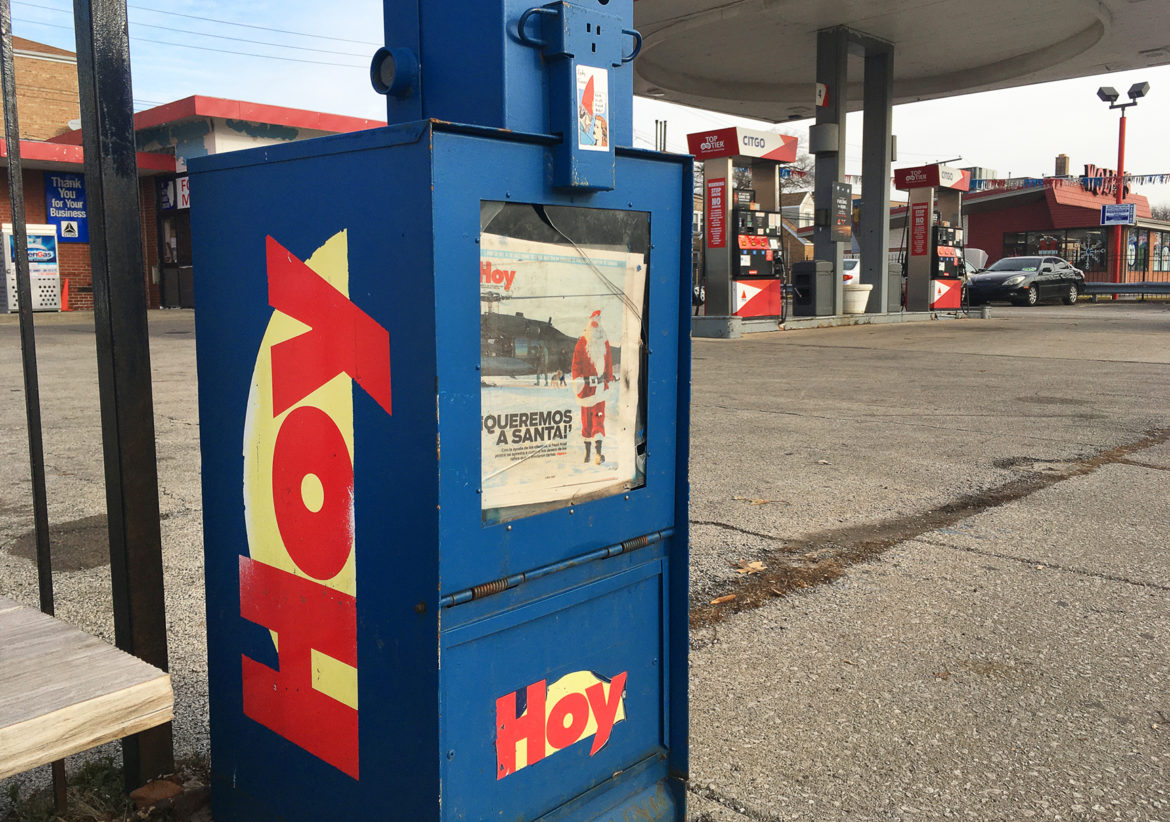 The last issue of Hoy newspaper at a corner news box in Chicago. Photo by Elio Leturia, Special to Borderzine.com

By Hallie Newnam, Special to Borderzine.com

CHICAGO – After 16 years, Hoy—the Spanish-language newspaper of the Tribune Publishing Company—has shut down.

In mid-November, the Tribune announced that on Dec. 13, 2019 both Hoy’s print and online operations would end. However, the Tribune was reportedly “aggressively exploring other options” for its Hispanic audience.

Many loyal followers of the publication were frustrated and confused about the newspaper’s abrupt end. “This is such a loss for Chicago. Hoy covers this city’s Latinx community with a depth that no other newsroom in the city is capable of doing (or seemingly willing to do),” tweeted Ella Lee, a reporter and editor at The Depaulia, the student news site of DePaul University in Chicago.

The decision to shut down Hoy received backlash from the Chicago Tribune Guild. It is “deeply disappointed that Tribune Publishing is shutting down Hoy, which has gone beyond stereotypes and provided meaningful news to the vast body of Spanish-speakers in our region. This is a disservice to our journalists, our readers and our company.” They requested the Tribune Publishing executives to reconsider their decision but the closing went ahead.

Reasons behind the closing

Although there was not an official reason provided for the shutdown of the newspaper, cutbacks had slowly been made over the past two years, which insinuated an impending end. Hugo Balta, President of the National Association of Hispanic Journalists (NAHJ,) stated, “Going by what Tribune has made public, it’s a business decision.”

“From my point of view,” said Clemente Nicado, editor and publisher of NegociosNow, a Chicago-based business publication, “the disappearance of Hoy has to do with, on one hand, the adverse scenario faced by all print media and, on the other, Hoy couldn’t take a different road to survive. Nicado, who worked at Hoy for four years, added that it’s required “to have a good business model, place executives who understand the Latino community, and know the industry sufficiently to adapt to the new times. That did not happen in this case.” 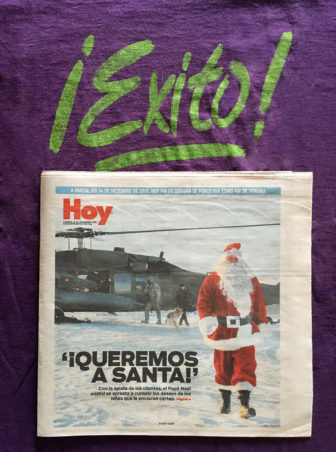 The last edition of Hoy newspaper, Behind, a t-shirt of its predecessor, the defunct ¡Éxito! Weekly paper. Photo by Elio Leturia, Special to Borderzine

The Tribune venture that aimed at the Chicago Spanish-speaking audience started with the weekly ¡Éxito! (Success! In Spanish) in 1993. Ten years after, Hoy was launched as a daily publication in 2003. Later it moved to three times a week. In 2017, the paper became a weekly. “I — and many of us who work in Latinx media — knew they would one day close Hoy. That’s part of the reason I left in 2014,” stated The Chicago Reporter Editor Fernando Díaz when the announcement was made. At the time of the closing Hoy’s staff had been reduced to six employees, which is less than one-sixth of the original staff comprised of 33 during its launch year.

With the knowledge that the Hispanic community accounts for nearly 30 percent of Chicago’s population, it is clear that Hoy’s disappearance will greatly affect a large amount of the city’s Spanish-speaking readers.

“To have an outlet like Hoy shut down, one of very few, is detrimental in assisting a community that, like so many immigrant communities, not just Latinos, gravitate to media in order to learn how to navigate in their adoptive country as well as stay in touch with their family and their friends back home,” said Hugo Balta, NAHJ President.

Telemundo Chicago producer Carolina Cruz thinks the closing mostly affects “the older generation of the Hispanic audience that really is more Spanish dominant.” She said that readers in their fifties and sixties that were raise in a Spanish-speaking households are “going to look for information in Spanish because that’s the language [they] feel more comfortable with.”

“The ending of Hoy is bittersweet … for me, and many others, it was a place to practice a special kind of public service journalism,” said Fernando Díaz, who landed his first managing editor job at Hoy. “With its departure, we will see whether the community steps up to support independent media. I think there is a will and we have many ways to ensure that our communities get covered. But the closure of Hoy now means the ball is in our court. We have an opportunity to shape the future of Latinx media and we can’t let it get away.”

Now that it has been over a month since the shutdown, the Tribune has made efforts to continue to serve the Latinx community in Chicago, but have these efforts been enough?

It was announced on Dec. 18, 2019 that some affected employees have, in fact, been offered new positions at the company. Laura Rodríguez, one of the six remaining staff members of Hoy, has taken up a bilingual journalist position for the Chicago Tribune. Hoy members Gisela Orozco, Leticia Espinosa and José Luis Sánchez are now editing for the new “Tribune en español” section on the website under Tribune Publishing.

Since the shutdown of Hoy, the Chicago Tribune website now has a section titled “Tribune en español.” Within the section, there lies three subsections: Noticias (News), Entretenimiento (Entertainment), and Deportes (Sports). According to Laura Rodríguez, the stories that are published are not original for this website; they are curated stories from other national and international agencies. The stories are not necessarily local, and they focus more on broad news that may affect Chicago’s Latinx community. Some of the stories originate in Spanish, and some are translated from English to Spanish and edited by Orozco, Espinosa, Sánchez, and former Hoy editor-in-chief Octavio López.

“Is it better than having nothing? Yes. But is it enough? No,” states Rodríguez. She says that the Tribune en español section is a work in progress; it’s a start. She hopes it develops into something stronger with time by taking advantage of local resources and getting more active in the newsroom.

Only time can tell how they will try to make up for Hoy’s loss in the future. As NegociosNow Publisher Clemente Nicado said, “…[T]he Hispanic community is here. It is bigger than it was in 2003. They love to speak Spanish or speak both languages. You have to reach this community one way or another, whether through print, digital or television, or through a combination of them. While there is a Latino community and information to convey, the opportunity is there.”

Hallie Newnam is a journalism student at Columbia College Chicago.