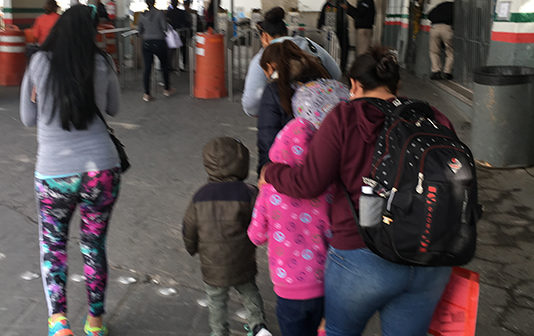 I sat in a small room in Tijuana, Mexico with a 13-year-old indigenous Mayan Guatemalan girl.

She left Guatemala after a cartel murdered her friend and threatened to rape her. Her mother wanted her to live and believed the only way for her to survive was to send her daughter alone to the U.S., to apply for asylum.

Now she was alone and stuck in Mexico.

Every morning, the Guatemalan girl, along with other asylum seekers, would frantically gather at the Tijuana-U.S. border where they waited to hear their name or their number called so the Mexican government could escort them to the U.S. border.

As the director of the Immigration Clinic, I was in Tijuana, with my law student from the Vanderbilt University Law School Immigration Practice Clinic. In the clinic, we represent asylum seekers in deportation proceedings before the U.S. immigration courts. We traveled to the Tijuana border in December to volunteer with the legal services nonprofit Al Otro Lado.

On my trip, I witnessed the contradictions between human rights protections in the Refugee Convention and how the asylum system was operating in practice.

The administration’s formalizing of informal policies I witnessed in December, along with the Supreme Court’s decision in Barr v. East Bay Sanctuary Covenant in September, closes the southern border to asylum seekers.

In implementing these policies, the U.S. is acting in violation of its own law governing treatment of refugees, the U.S. 1980 Refugee Act. The Q&A below illustrates what the U.S. should be doing, under law – and what it isn’t doing.

1. What are the responsibilities of the US toward refugees?

The Refugee Convention was drafted after the Holocaust, when Jewish refugees were denied protection. The denial of protection resulted in some of the returnees dying in Europe. The events of the Holocaust prompted the international community to enshrine the duty to not return an individual to a country where they would face persecution or death.

In 1968, the U.S. signed onto the provisions of the Refugee Convention. The United States and other countries that signed the Refugee Convention agreed that they would not return a person to their home country if the person fled because of a fear of past or future persecution based on their race, religion, nationality, political opinion or membership in a particular social group.

In 1980, the U.S. modified the Immigration and Nationality Act to provide full protection to asylum seekers. The procedures, contained in the act, lay out how an asylum seeker can approach the border, express a fear of returning and have a court hearing with a U.S. immigration judge to determine whether they are a refugee.

2. How have policies at the border changed?

In January, the administration signed an executive order, the Migration Protection Protocols. This order modified procedures under the 1980 Refugee Act in that asylum seekers must now wait in Mexico and for their asylum hearings before U.S. immigration judges.

In April, the administration proposed new regulations that would impose fees on asylum applicants and would preclude applicants from lawfully working in the U.S. while their applications are pending.

In May, the chief officer for the Asylum Division with U.S. Citizenship and Immigration Services diminished key protections for unaccompanied minor children. One change would prevent a child – like the asylum seeker I interviewed from Guatemala – from presenting her asylum case before a nonadversarial asylum officer in an interview instead of going to immigration court.

3. What are the policies for asylum seekers in transit?

Under the U.S. Immigration and Nationality Act, a person is not entitled to refugee protection if the U.S. has a valid safe third country agreement with countries through which an asylum seeker travels.

According to U.S. law and United Nations, a safe third country is one in which the asylum seekers’ life or freedom would not be threatened. Before such agreements go into effect, that country must provide fair procedures for people in transit to apply for asylum or equivalent protection.

In July, the administration published a rule banning all asylum seekers who traveled through a safe third country in transit to the United States from applying for asylum.

In the background of this rule is the fact that this year, the administration entered into safe third country agreements with Central American countries: El Salvador, Honduras and Guatemala.

But these countries are only marginally safe, even for their own nationals.

These Northern Triangle countries have extremely elevated homicide rates; high crime by drug traffickers, gangs and other criminal groups; and corrupt public institutions. In Honduras and El Salvador, homicide rates for males under 30 are the highest in the world.

The high incidence of violence, has, in part, led to the constant migration from the Northern Triangle.

4. What happened with the lawsuit challenging the administration’s new rule?

The refugee legal advocacy organization, East Bay Sanctuary Covenant, challenged the administration’s interim rule. This case made its way to the Supreme Court.

The Supreme Court’s order does not have a written opinion, nor does it indicate how the individual justices voted. There is only a dissent written by Justice Sotomayor, joined by Justice Ginsberg.

The case is now back before the Ninth Circuit, before even possibly coming back for the Supreme Court to evaluate the merits of the case.

While the case is proceeding through the court system, the Supreme Court’s order shuts down the southern border to asylum seekers indefinitely.

The administration’s changes to the asylum system are now being enforced.

That leaves individuals at risk of staying in unsafe countries with marginally operational systems for processing asylum seekers or being deported to their home countries, where they could face persecution or death.

Doctors without Borders found that 68% of migrants from the Northern Triangle reported being victims of violence during their trip. Nearly one-third of women had been sexually assaulted. Perpetrators include gang members and Mexican security forces.

Another report documented more than 60 cases where deportation back to the Northern Triangle resulted in persecution.

As a practicing immigration law attorney and professor looking at the evidence, it seems clear to me that the interim rule places at risk the lives of multiple asylum seekers.