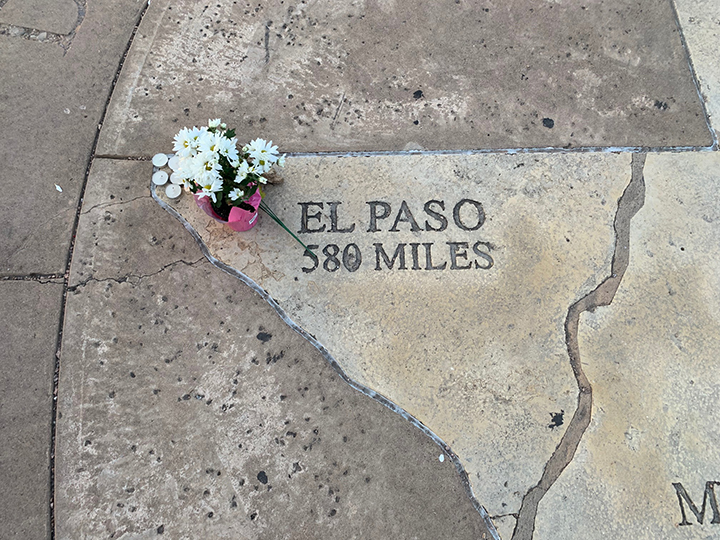 It seemed incomprehensible at first to understand or express my thoughts and emotions after last week’s mass shooting at the Walmart new Cielo Vista Mall. Now that a few days have passed and we can reflect on what’s happened.

I was washing dishes in my Austin home the morning of Aug. 3 when my boyfriend texted me. He sent me a screen shot from Twitter, soon followed by a CNN alert: “Police … El Paso… Cielo Vista Mall … active shooter … lockdown.”

He asked me if my family lived in that area – they don’t. I immediately sent a group text to my loved ones to make sure they were safe. None of them were in the area and all were safely at home. However, my relief quickly turned to horror as details emerged.

The next few hours were nothing short of a nightmare as I anxiously scrolled through social media and watched the national news outlets.

Pain set in as additional details unfolded —a lone white gunman, 20 Hispanic victims, six from nearby Ciudad Juarez; about two dozen injured men, women and children at the busy Walmart near the city’s largest mall; an anti-immigrant manifesto released by the suspect on a social media web site.

I muted the TV and sobbed into my hands. I felt as if I had been violated; as if my hometown and all my Hispanic brothers and sisters across the nation had been violated. I was angry and I felt helpless. I wasn’t just watching breaking news anymore; I was watching terror unfold in my hometown.

Day two after the shooting was the hardest. The victims’ names were being released, photos were appearing on news channels and social media, and interviews with the victims’ families were airing. The faces of the innocent people who lost their lives flashed through my head like jump cuts in a film. I didn’t know any of them personally, but they might as well have been my abuelo, my tia, my prima, mi hermano. Tears welled up and rolled down my cheeks in waves. I would regain my composure for a minute or two. Then my chest would begin to heave as I wept again, asking myself “Why hurt my people? Why El Paso?”

I later watched CNN’s Anderson Cooper interview Octavio Lizarde, a victim shot while inside the bank at the retailer. His nephew, Javier Amir Rodriguez, was killed. Lizarde said he was opening an account to cash his paycheck, and went to the to buy clothes and shoes. As he stood in line, the gunman walked in and opened fire. The power of that image brought me to my knees – the injustice. I then prayed for some sort of hope to emerge from these ashes of hatred.

Since the shooting, the news has been filled with more gruesome, horrendous details of the mass shooting at the hands of a young white man from Allen, Texas, who posted a white supremacist diatribe shortly before opening fire. I’ve seen the political articles flood my news feeds since the shooting, but they pale in comparison to the many stories I’ve heard and read centering around how El Pasoans are uniting to care of one another. El Pasoans watch over each other; it’s what we do and who we are.

Blood donation centers were packed. People brought water bottles to those waiting in line to give blood. Crosses were placed along the fence of Walmart as the names of the now 22 victims were released. Vigils were held with hundreds of people gathering to mourn and remember those who lost their lives. GoFundMe accounts surpassed their goals by thousands of dollars to take care of the expenses for victims’ families Over and over, the resounding message was something like, “This is my El Paso. This is what we do. We are united. We’re familia.” It is true.

What Makes Us Strong

The thread I’ve seen woven throughout each interview and story is forgiveness. Some family members of the victims have said: “We forgive (the shooter). We don’t hate him.”

Or, in Lizarde’s words: “If God was able to forgive. . . then I forgive as well.” This is what makes the people of El Paso unique—they do not repay evil for evil. Instead, they forgive. Even as they mourn, they forgive.

What happened that Saturday morning was atrocious — there are no words to describe the evil that took place. I’m still heartbroken, angry and confused. But we are not without hope and we are not without strength. I think the way forward has already been shown to us by these brave men, women, and families who are still grieving. To me, they are an example of resilience, love, and all that is good in the face of adversity.

This is what I believe, El Paso — the shooting is not what makes you. Your love, unity, forgiveness, bravery, and strength are what you are and will continue to be known for. Let’s press on to find hope. Let’s grieve together. Let’s heal together. Let’s be #ElPasoStrong.

Heather Calvillo is an Austin-based freelance writer, editor and podcaster. She graduated from the University of Texas at El Paso in 2010 with a bachelor’s degree in print media, where she first began writing for Borderzine. Heather has a passion for storytelling, racial reconciliation, and demonstrating hospitality to all.