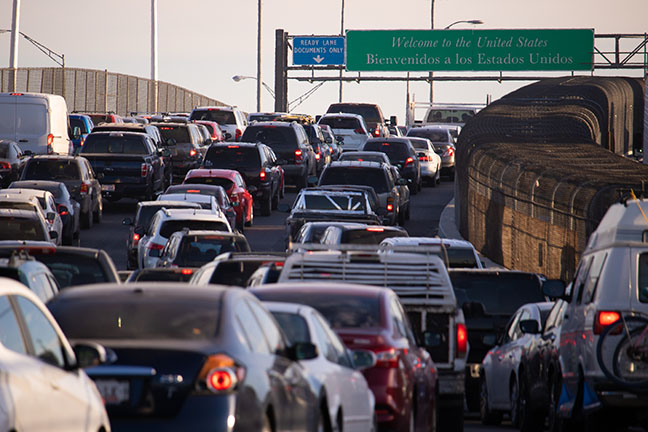 Cars lined up waiting to cross the Bridge of the Américas on April 2, 2019.

By Marisol Chavez and Valeria Olivares

University of Texas at El Paso students are experiencing as long as five hours to cross from Juarez and are becoming more anxious as President Donald Trump threatens to close the border.

The longer and slower lines at the international bridges are affecting people who cross the border regularly for school, work, shopping and even visiting family. At a news conference last week in El Paso, Customs and Border Protection Commissioner Kevin McAleenan said he was moving 750 officers from international bridges throughout the Southwest to assist in migrant processing effort. He acknowledge this would disrupt the movement of goods and people across the border, especially over the Semana Santa (Holy Week) period. Long lines have been reported this week at bridges between the U.S. and Mexico throughout the Southwest border.

“It’s affecting me in a very big way because I do cross (the border) every day and the lines are getting super packed,” said UTEP student Luis Angel Salas.

Trump has threatened to close the border at least seven times since October, most recently through a tweet on Sunday. “I’m not playing games,” he said last week.

Thousands of Central Americans have made their way to the U.S.-Mexico border, seeking asylum from life-threatening conditions in their home countries, and have overwhelmed Border Patrol resources.

“Mexico is going to have to do something, otherwise I’m closing the border,” Trump said.

Some international students are scrambling to make arrangements to have a place to stay on either side of the border and overall preparing for the worst-case scenario.

“Many people have told me to just stay here at the U.S.,” UTEP student Emmanuel Delmar said. “But it’s hard for me to find someone who would like to accept me to live with them.”

Like many international students, Delmar and Salas wake up at the crack of dawn on a daily basis in order to beat the crowd and avoid the long lines that can form as daily commuters arrive at the ports of entry.

This Monday, however, there was no avoiding a delay.

Karla Carmona, a lecturer at UTEP’s Physics Department, has been worried about the economic impact this issue is having on her and her family.

“I only have plans for one week,” she explained.  “That means here until Friday, I have it covered … because a friend can open his house to me.”

Carmona, who has three children, worries about the border being shut down as she knows because the cost of a hotel room does not fit into her budget.

“I may take advantage of that opportunity if we see that this will be longer than this week,” Carmona said.