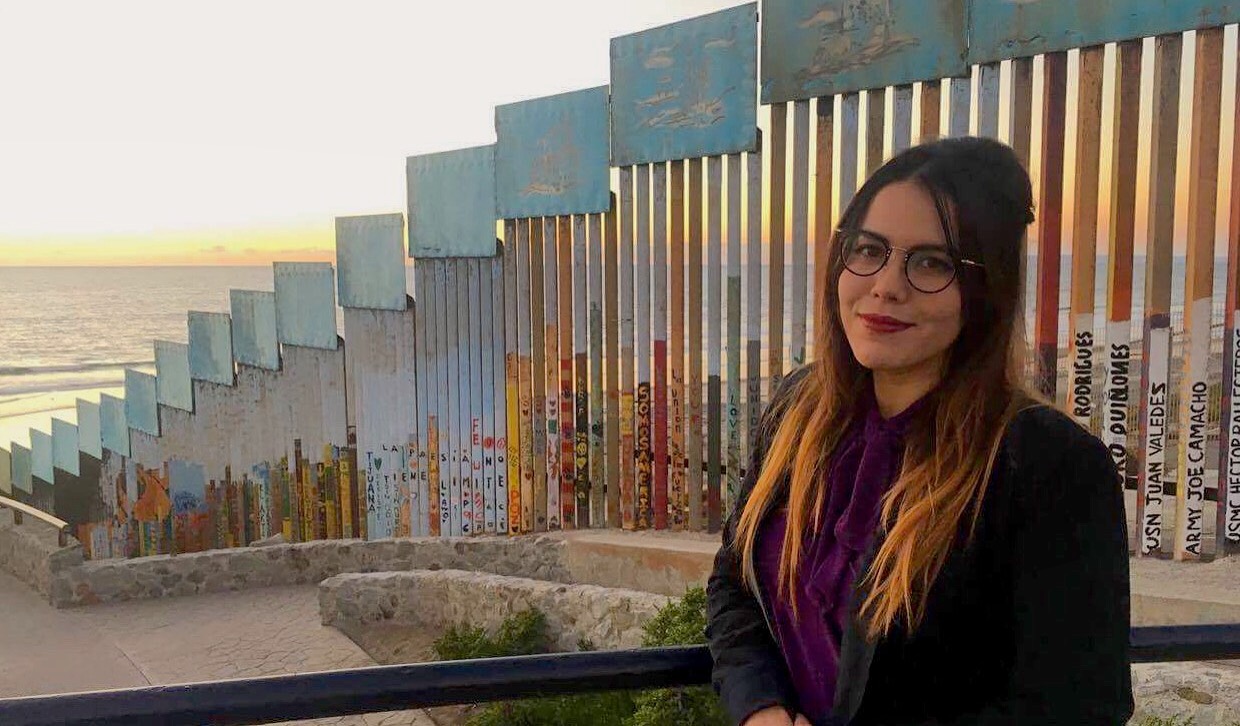 EL PASO – Before sunup on a recent breezy Monday morning, Estefania Castañeda-Perez, 27, stood outside the Sun Metro’s Santa Fe Street downtown bus transfer center with a stack of surveys in her arms. Her mission: to further research on the experiences of people crossing the border bridges from Ciudad Juarez to El Paso. The ambitious project, she says, hits close to home.

“I began to regularly cross the border when I started to attend middle school in San Diego,” said Castañeda-Perez, a political science Ph.D. student at University of California Los Angeles.

Castaeñda-Perez was born in Tijuana and, as an infant, her parents began crossing her back and forth across the border. When she was older, she began to cross to attend school in San Diego.

“During this time, I had to make various sacrifices that most students in my school did not have to endure, including sleeping less than five hours daily, waking up at 3 a.m. to cross, and enduring harsh questioning about my identity and citizenship status from Customs and Border Patrol on a daily basis,” she added.

The surveys she collected recently during a trip to El Paso are the data collection phase of her dissertation and part of a larger project with Professor Sergio Garcia-Rios of Cornell University, who is supporting and guiding the project.

“We think that this research will help us present to the rest of the country a closer look at the border and one that is often ignored. In other words, a ‘fronterizo’ view of the border,” said Garcia-Rios, who studies Latino and immigrant identity at Cornell.

It is an extension of a senior honors thesis she completed as an undergraduate student at San Diego State University. At UCLA where she is a second-year doctoral student, her studies have been supported by the American Political Science Association, the National Science Foundation, and the Ford Foundation.

Castañeda-Perez has already collected 1,300 surveys in El Paso, and in Tijuana has obtained 770 responses from individual border crossers. Next on her list of places to visit to collect data are the border towns of Brownsville and Nogales.

In El Paso, she recently enlisted seven UTEP student volunteers, and, with the support of UTEP Professor Hector Padilla, recruited several students from Universidad Autónoma de Ciudad Juarez to help administer the surveys to border crossers as they drive or walk over the Santa Fe and Cordova bridges from Ciudad Juarez to El Paso. She spent about two weeks in the Sun City to supervise the data collection.

“Through this research, I seek to amplify our understanding of how border enforcement impacts the lives of individuals residing in the U.S.-Mexico borderlands,” Castañeda-Perez said.

In addition to one day publish her findings in an academic journal, she said she hopes to “create one of the first public databases from the survey responses on trans-fronterizos.”

With the time-consuming data collection phase still underway, Castañeda-Perez does not yet have an end date for completion of the project.

The one-of-a-kind survey, which is anonymous, includes questions about the experiences of people who cross through U.S. border ports of entry, and how negative contacts with Customs and Border Patrol officers affects their sense of legal empowerment, sense of belonging, and physical and mental health.

El Paso student volunteers said approaching strangers as they crossed by foot or in cars into El Paso was no easy task.

Andrea Daniella Mata, 24, a sophomore sociology major at UTEP, helped Castañeda-Perez pass out the surveys at the bus transfer center from Monday through Friday one recent week in October.

“I can’t imagine how exhausting it might be for (people to cross the border every day) but it shows everyone has a story and everyone is important,” said Mata, who lived in Lubbock before moving to El Paso to attend college.

She said it’s important for El Pasoans to be “aware of why people might be crossing… and not just assuming” why they cross.

“I think (this) research is so important,” she added.

UCLA Political Science and Chicano Studies Professor Matt Baretto, who is dissertation adviser to Castañeda-Perez, said her research is important to cross-border commuters.

“The research project Estefania is undertaking is one of the first in the country to fully understand, document, and analyze the experience of cross-border commuters. Her research challenges the notion that crossing the border is a simple transactional event, and places it within the full context of both sides of the border region,” he said.

He added that the survey “is uncovering the persistent rights abuses that happen at the border to legal border crossers, and how these negative experiences go on to impact the identity, psychology, and even health of people who cross.”

Dr. Irasema Coronado, a UTEP Political Science professor who has done extensive research and writing about border issues, said Castañeda-Perez’ research focus will contribute to public understanding of the many reasons why people cross from Mexico into the U.S. and how they are treated by Border Patrol and Customs agents.

“It is important to gather data so that policymakers can make better decisions,” Coronado said. ” We all hear anecdotes about border crossing experiences; this research will provide data that will substantiate or refute the stories that we hear on the street or from our family and friends.”

She said border crossers sometimes feel intimidated by the attitude or questions they are asked by border agents as they wait to be cleared for entry into the U.S.

“These folks have a lot of discretion” when questioning border crossers, she said.

Daniel Gonzalez attended the multimedia journalism student program at UT El Paso and is a volunteer with KTEP radio.