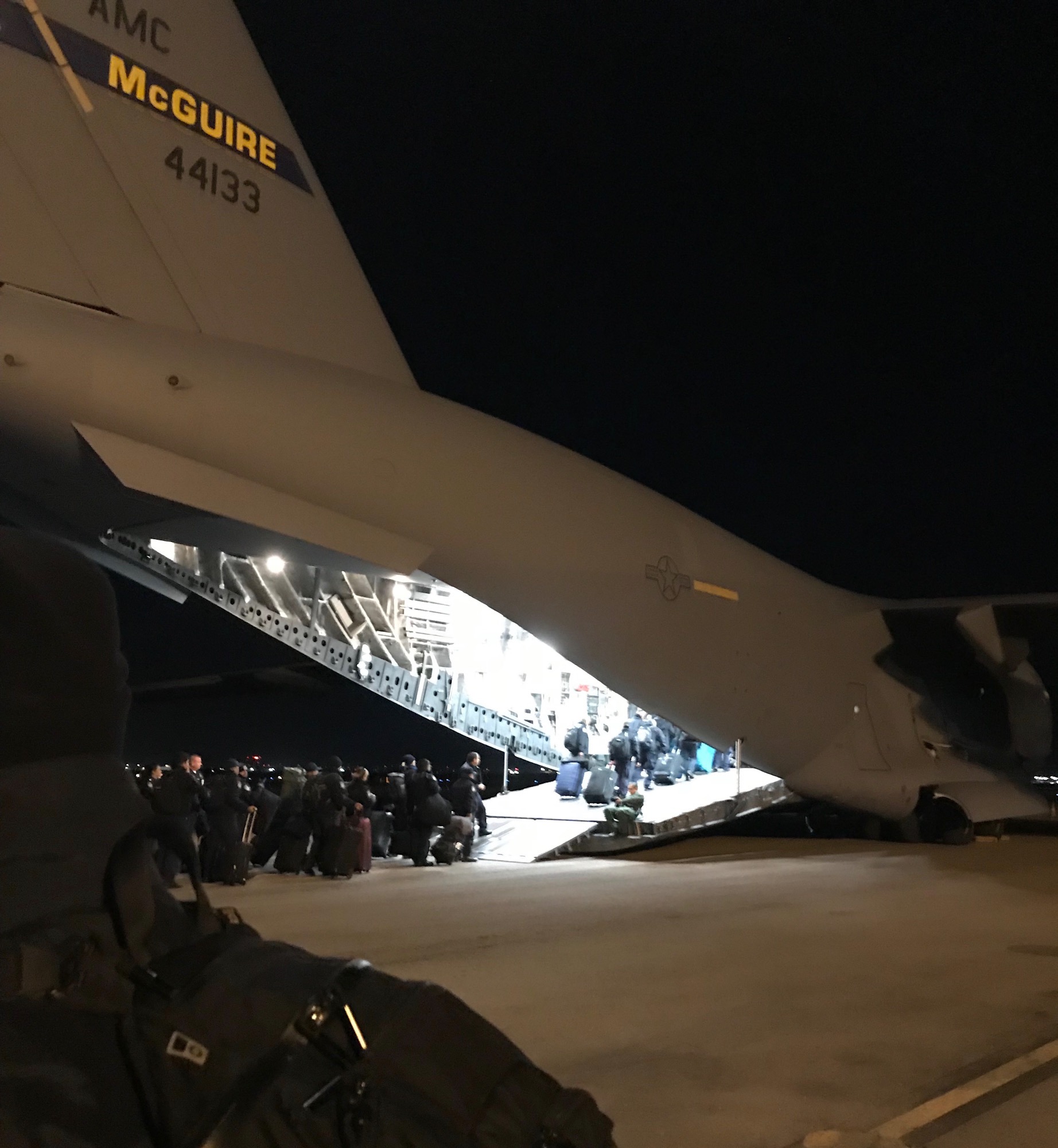 Customs and Border Patrol agents board transport for deployment to Southwest U.S. ports of entry in response to migrant caravans heading to the border. Photo courtesy Michelle Aranda.

On Nov. 13, nine buses carrying the first large wave of about 350 asylum seekers from the Central American migrant caravan arrived in Tijuana.

Michelle Arandas’ mother and stepfather are both Customs and Border Protection agents assigned to the El Paso ports of entry. However, on Nov. 15, Aranda had to drop them off at the airport, where they joined other El Paso CBP officers in boarding a plane to Nogales, Ariz. Their deployment came in response to the migrant caravan approaching the Arizona border. Arandas’ parents have since been relocated to the San Diego border after it became clear that was the caravan’s destination.

“My mom was definitely nervous. She started packing right away as soon as they gave her the five-day warning. You could also tell the he was kind of nervous when we were on our way to the airport,” Aranda says.

The holidays for the Aranda family have always been offbeat, usually celebrated a week in advance or a week after the actual holiday because the parents have to work most holidays.

“We’re kind of used to the holidays not being ideal,” she says.

However this is the first time that they didn’t get to celebrate Thanksgiving together. Aranda, who is pregnant, also says her parents’ deployment meant they missed her first ultrasound and will likely miss the gender reveal party, as they aren’t expected to be able to return home until after January.

With both parents deployed, Aranda has taken on the responsibility of taking care of her 13- and 15-year-old sisters. Despite their family being somewhat used to their parents’ work schedule, Aranda says they have had to make some adjustments to stay connected with their parents in their absence. “Taking care of, I guess, regular things around the house when it comes to mail, getting the bills and sorting them and sending them pictures of the mail because there’s no way for them to basically see what they’re getting here. Making time to FaceTime with them because their work schedules don’t exactly correlate with our school schedules for the girls or work schedules for us, so that’s pretty much the biggest adjustment,” she says.

When they had first been deployed to Nogales, Aranda’s parents reported feeling restless as not much was happening at that port of entry. Now that her parents are at the San Diego port of entry, Aranda says her own concerns for their well-being have increased.

Despite their parents’ efforts to stay in contact through text messages, Aranda and her sisters only get to FaceTime and actually see their parents about once a week. She says she can see the long separation is having an impact on her sisters.

“They try to text us throughout the day. They’ll sometimes even send us some pictures of where they’re working at, what post they’re at while they’re at work. But now that they’re gone and they haven’t seen them in a really long time like, you can tell they miss them. ”

Aranda plans to drive her sisters out to San Diego for Christmas so the family might have some holiday time together.