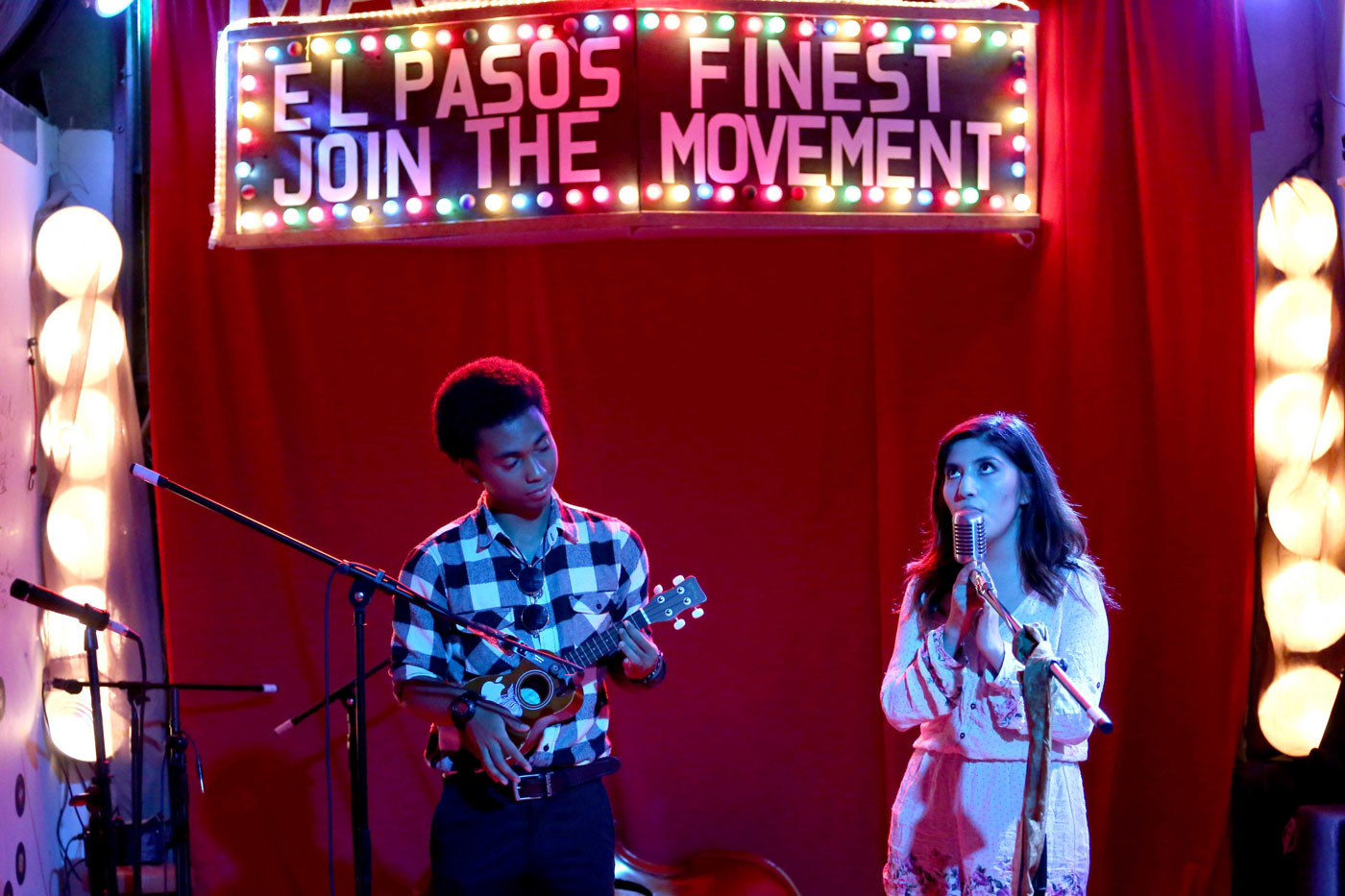 Last October I was in Marfa, Texas at the Chinati Foundation—an art wonderland in the middle of nowhere known across the globe for its use of minimalism. It was open weekend so exhibits and galleries were free and open to the public as artists from across the nation flocked to Marfa.

Solange Knowles performed a free show at Chinati in the center of a grass field where only fifteen concrete Donald Judd sculptures sit. As an audience member there were only two rules: we all had to be dressed in white and we could not carry cell phones. The whole experience was mesmerizing. The audio was crisp and Solange, her performers and musicians were all dressed in hot pink silk. They sang and danced as the sun set behind her.

Before the performance, as my friends and I stood there phoneless, I overheard two guys who had flown in to El Paso from New York only to drive to Marfa for the performance. “El Paso seemed so boring. What do people even do there?” I had to bite my tongue. Not just because I wanted to address his ignorance or because I am a proud El Pasoan, but simply because it was untrue.

El Paso has way more to offer than initially meets the eye. We are a community rich in visual artists, musicians, photographers, filmmakers and artists of all sorts rooted in culture. Although standing in that Marfa field was an amazing experience where I felt immersed in the moment, that feeling was nothing new. I’ve felt it right here more times than I can count.

Although there are some El Paso galleries are modeled after other cities, they will still always have their own El Paso twist to them. Here are seven ongoing experiences to continue checking out in El Chuco before you make your assumption. El Paso Coffee Meetups sometimes include a tour of the El Paso Art Museum along with coffee tastings.

Bean Type Coffee Roasters can be found at the El Paso Downtown Artists and Farmers Market almost every Saturday of the year. Arleen Mendez founded Bean Type. It is the first organic and fair-trade coffee roaster shop to hit El Paso. Mendez finds it important to have fair trade coffee so coffee drinkers know what their consuming is coming from farm workers who are earning a fair living wage in return from making the coffee.

Arleen took it a step further from other shops and started El Paso Coffee Meetups. At the meetups, she explains to attendees how to make their own coffee at home with a tutorial. Every meetup has its own focus on a certain coffee and a changeup in locations.

Being a coffee lover myself, specifically a cold brew lover, I attended a meetup at the El Paso Museum of Art where Arleen taught us to make cold brew at home with a french press. After getting to sample different roasts of coffee we were put into groups and able to explore the museum with new people we had never met.

The meetups are about once a month and have also included one where they partnered with VeloPaso to ride bikes to different coffee shops to sample their coffee. At another meetup, the group hiked the Franklin Mountains and leaned how to take portable coffees and teas on hikes.

This is an awesome way to make new friends of all ages and backgrounds and bond over your love for coffee. Dream Chasers Club, The Chrch, Power at the Pass and the Art Space lofts are just some of the 13 venues filled with paintings, drawings, music and live art on the last Thursday’s of every month for Last Thursday’s Art Walk.

Across the country, cities big and small participate in their own versions of last Thursday’s and First Friday’s—variation of artist showcases. Some venues across downtown El Paso offer drinks and food while others give artists the opportunity to network with one another and often times there are also interactive events.

Last Thursday’s give El Pasoans and even tourists a chance to see the newly revitalized downtown by walking through San Jacinto Plaza and around Southwest University Park. I’ve never had a bad experience at the art walks and have been able to meet other photographers, artists and small business owners that bring the hispanic culture of El Paso to life. What started off as a laid back Grandma’s house themed bar has now turned into one of the most intimate venues to dance to house, electronic and all sorts of genres.

Owner Lenny Perez did not want to limit the bars events and when he was approached by up and coming DJs to do shows, he didn’t hesitate.

Now, every weekend and some weeknights, you can find DJ collectives and individuals spinning in what appears to be Grandma’s living room. For special occasions, Prickly Elder also has outdoor sessions in the parking lot. They also host bingo nights every Monday and tea party’s on certain Sunday’s where four legged friends are welcome and part of the proceeds are directly donated to the Humane Society of El Paso. Every major culture hub needs an open mic if it wants to be taken seriously. Thankfully, El Paso’s longest running open mic has provided a stage for poets, singers, and artist since 2007. Since it is open mic, in one showing you can see slam poetry, acoustic guitars, or even a comedy show.

I used to attend back when the Perculator was still open. Unfortunately, the Barbed Wire Open Mic series hasn’t found a solid venue after the Perculator closed down, so you just have to follow them on Facebook or Instagram to see where the next show is at. But since their partnership with BorderSenses, a nonprofit that promotes the arts, they’ve established themselves as the place to be if you want to see El Paso’s up and coming talent.

Considering that they hold a show at least 3 times a month, there’s really no excuse to not checking out some of the local creatives. The El Paso Punk Rock Flea Market meets at different locations every month around the city.

If you want to see El Paso’s more grungy talent, check out The Punk Rock Flea Market where paintings of twisted skulls are sold next to vintage clothes. Alternative vendors from all over the Southwest show up once a month. The market is usually held at the Whole Foods on N. Mesa. Occasionally they’ll even have a night market with music, entertainment and food. There aren’t many places where parents can bring their kids and buy a shelf in the shape of a coffin.

Most El Pasoans are familiar with the downtown Artists and Farmers Market, which takes place every Saturday from 9 a.m. – 1 p.m. in Union Plaza, but may not be as familiar with the Punk Rock Flea Market which varies in dates. The market is set up at various locations including Whole Foods Market, the Lowbrow Palace and 5 Points Bistro.

The Punk Rock Flea Market is that there is such an eclectic variety. It’s not usually my style, but it’s hard not to have fun when you’re surrounded by El Paso’s finest and weirdest.

Geeks Who Drink meet every Thursday at Craft and Social on Franklin Avenue.

While I’ve never been, it’s hard to have a list great things to do in El Paso without putting in the Geeks Who Drink trivia night. You can find GWD matches five nights a week in a variety of spots around the city.

Geeks Who Drink is a nation-wide quizzing and drinking contest, modeled after the famous quizzes in the UK, where up to 6 players try to outdo the other team in their endless knowledge of movie trivia, random facts and even the occasional themed quiz.

Geeks Who Drink is where you can test your knowledge against reigning champs and gain, besides the occasional prize, much-needed street cred. You don’t have to drink, but it helps. Hiking is probably at least in the top five things to do in El Paso, and for a good reason. Not only because, as a photographer, there are plenty of opportunities to take pictures and capture beautiful sunsets, but because El Paso has some of the most rewarding day-hikes I’ve ever experienced. It doesn’t take long to make it to the top of the Franklin Mountains, and when you do you get to see for what seems like hundreds of miles in every direction. If you don’t know many people who like to hike on the regular, there are plenty of hiking groups on Meetup or on Facebook that you can join, and there are even women-only groups.

Because we do live in the desert, you have to take certain precautions, such as bringing plenty of water and snacks. Every year there is someone who needs help getting down because they either got lost, they hurt themselves or because they are overheated. You can avoid all of that by letting people know where you are going, not going alone, and bringing some basic supplies with you.