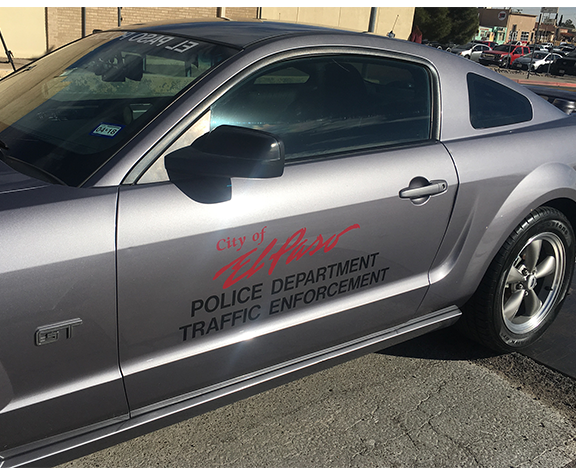 EL PASO – Roadside signs might declare friendly driving is the Texas way, but not everyone seems to get the message.

“The officers who are assigned to these vehicles are required to take training on what to look out for when they’re out there,” Gomez said.

EPPD began introducing the cars, then known as “road rage” vehicles, to their fleet of traffic vehicles in 2004 as part of a pilot program. The program was deemed successful.

“Its success is not in terms of tickets given, because we don’t judge it on that,” Gomez said. “We judge it on if the officers in these vehicles are able to catch these aggressive drivers. And they have shown that they do by talking with the officers.”

Drivers may be fined up to $200 for each moving violation associated with aggressive driving and could spend time in jail, according to the Texas Department of Transportation website.

The current EPPD traffic fleet mostly consists of these vehicles; Mustangs in a variety of colors like gray, red, black, and even green. There are about 30 partially marked Mustangs in the traffic fleet. These cars have “City of El Paso Police Department Traffic Enforcement” printed on the sides as well as blue and red flashing lights in the back and in the front of the vehicle. On the hood of the vehicle it says “El Paso Police” in reverse so people can read it in their rearview mirrors.

“Most of our fatalities on the road are related to speeding or changing lanes aggressively,” said Officer Luis Granillo, traffic officer in a partially marked vehicle. “When you’re driving at a high speed and changing from lane to lane, you can lose control of your vehicle and roll your car. We’re there to stop things like that from happening.”

Granillo has been in the police force for 10 years, seven of those years being in the traffic department.

When the department was using regular patrol cars, drivers would slow down immediately. Now that the department has been using these partially marked vehicles, drivers do not realize that these are police vehicles and are easier to catch being aggressive on the road.

The partially marked cars are only used during the day as a safety measure to prevent any confusion for drivers who are pulled over. El Paso has had two incidents where vehicles were caught impersonating police cars, Granillo said.

Texas Transportation Code §721.004 requires that, unless exempted by a local ordinance, police vehicles must be clearly marked with text that is legible at a distance of not less than 100 feet

“I was driving down the border highway going about ten miles over the speed limit and I got pulled over by one of those police cars that look like Mustangs,” said El Paso driver Gabrielle Velasquez.

“I didn’t feel unsafe when I was being pulled over because I had heard about these cars from my friends and I saw that it said El Paso Police in my mirror,” said Velasquez, who was pulled over for speeding on the Border Highway in June 2017.

“The main goal of these vehicles is to keep El Pasoans safe,” Gomez said. “The more exposure we give to these vehicles and let El Pasoans know that they’re out there, hopefully it reduces the chances of El Pasoans making decisions to drive aggressively. It’s not about catching people, it’s about preventing people. Hopefully that keeps El Paso safe.”

Tierra Fletcher is a multimedia journalism major at UT El Paso. She is expected to graduate in May 2018.