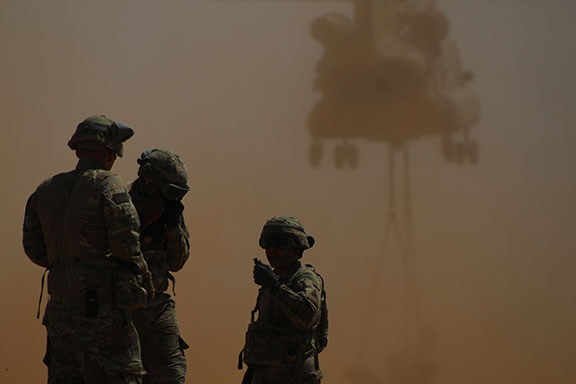 FORT BLISS, TEXAS – Sgt. Travis Pacheco was deployed December 2012 when he was 19 to the Kandahar province Afghanistan for nine months. He attributes his struggle with post-traumatic stress disorder situations he witnessed while deployed.

He is currently married and a father to a 3 year-old boy.

A team member of the C Battery 2-3S 1AD Divarty.

He was inside a U.S. Army vehicle that was hit by an IED (Improvised Explosive Device). There were also several times when the vehicle he was riding in was hit by small-arms fire.

Pacheco wasn’t injured and at the time didn’t feel affected by those events but after returning to Fort Bliss, he began to feel overwhelmed.

Sgt. Travis Pacheco after completing a training at Ft. Bliss.

“I realized that I started having some anger management issues, snapping for no reason. I would get anxiety over just being in a full room; I had claustrophobic episodes. Small things around the house that were going wrong would lead me to lose my cool,” he said.

At one point, he said, his marriage was in danger of falling apart.

“My home life was getting erratic and it got so bad that my wife was threatening to leave and remove herself and our child from the negative influence that I was having,” Pacheco said.

Pacheco was aware of the counseling resources available to soldiers and immediately sought help from Behavioral Health Services at the Eastwood Clinic in El Paso.

At the clinic he received counseling and medication, was taught breathing techniques and how to deal with what he calls “thinking traps.”

Pacheco says he has greatly benefited from the therapy and he now knows how to stay grounded and overcome stressful situations. He is grateful for his wife’s patience and continuous support and understanding.

Enlisting in the Army comes with a great weight and responsibility, thus to be able to endure it all, a soldier must have a strong frame of mind and emotional stability. However, before being sent off and upon returning from deployment, soldiers must undergo a strict and thorough evaluation, in order to certify that they are not only physically but mentally guarded to deal with what comes their way.

When asked about the training and evaluation procedure which soldiers underwent, Capt. Lindsey Roman said:

“Service members will receive suicide prevention and mental health awareness classes within 6 months prior to deployment”.

It is also required of them to enroll in an SRP (Soldiers Readiness Program) check, where medical evaluations, administration completion and legal assistance will be provided for each soldier within 30 days of deployment date.

As mental health training such as coping skills, anger management, and relaxation techniques may in fact yield positive results, there is no guarantee that soldiers will be unaffected by the atrocities they may witness and the strenuous combat conditions.

While some soldiers may not have trouble reincorporating themselves into ordinary life styles with their families, others may display a variety of symptoms that indicate their mental and emotional states have been severely touched.

According to the U.S Department of Veteran Affairs (VA), there are four types of PTSD symptoms which are nightmares or flashbacks, avoiding situations that remind you of the event, negative changes in beliefs and feelings, as well as feeling keyed up, meaning to feel suddenly angry or irritable.

The (VA) states that up to 20 percent of soldiers who have served in Iraq and Afghanistan suffer from PTSD in any given year.

The VA also refers to a study of Vietnam War veterans conducted in the 1980’s that indicates 15 percent of Vietnam Veterans were diagnosed with PTSD and 30 percent have suffered from PTSD at some time in their life.

The PTSD Foundation of America indicates that PTSD is more widespread in the military than the official numbers show because the stigma of seeking professional help prevents many of them from seeking treatment. Less than 40 percent of military undergo treatment for PTSD, according to the PTSD Foundation.

Although soldiers who don’t have support have it hard, those that are married and have families are also placed in a distressing position given their families sometimes don’t particularly understand what they went through, which eventually brings their marital relationship to a divorce.

Elizabeth Tarr who is a team leader from the 24th press camp at Fort Bliss shared that the divorce rate is high in the army due to the strenuous situations they experience and reintegrating with their family after that can be difficult.

“I’ve been deployed three times, twice in Afghanistan and once in Europe. I was married but am not married anymore; It’s difficult, you live your own life and all of a sudden you come home and your’e supposed to reintegrate with your family which is an extremely difficult process and the divorce rate in the army is high because of it. I was dual military which means that my ex was in the military as well, we were separated for about two years so coming back and trying to connect the pieces and continue that relationship was almost impossible because we grew apart.”

Tarr went through a period of depression but ultimately decided to visit a psychologist at Behavioral Health Services in order to raise her mental stability to the optimal level.

Military.com states that the divorce rate among both officers and enlisted men and women during 2014 was 3.1 percent, only slightly higher than the 2005 rate of 3 percent. They also emphasize that according to the new statistics they have declined since 2011 which number was of 3.7 percent.

Tarr, encourages her soldiers to take advantage of the services they are provided with and care for their mental and emotional stability. She tells them not to fall in the stigma of being shunned.

“I encourage my soldiers, if you’re having issues please go seek help, please go and talk to somebody, because if you aren’t mentally fit, mentally stable, how are you going to go down range and essentially live. You have to have a good mind frame in order to go down and protect yourself and stay safe, and protect essentially America.”