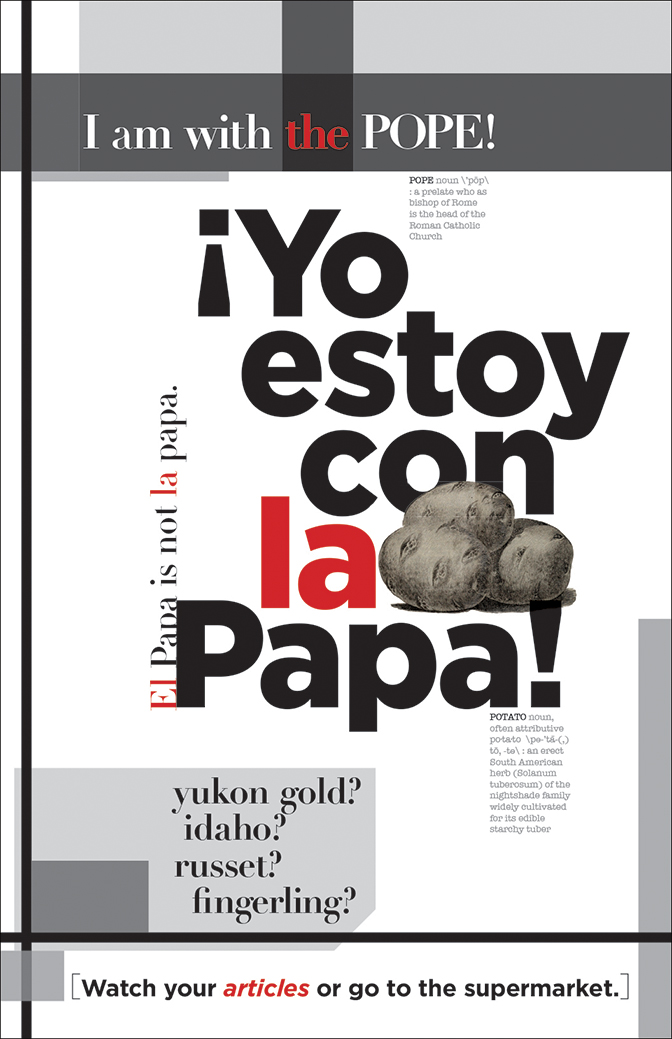 Spanish has become the second most used language in the United States.

According to a Pew Research Center report from September 2017, “the Latino population in the United States has reached nearly 58 million in 2016″ and more than 37 million speak Spanish. However, not all Spanish speakers speak or write it correctly, and the media have not helped to improve this situation because most of them do not respect the accent marks, and many do not use the tilde on the eñe letter.

The graphic exhibit ‘No Literal’ by Peruvian journalist and designer Elio Leturia tries to illustrate the situation through 12 posters.

These compositions portray different cases, including incorrect translation from English into Spanish. An example is mistakenly translating “María is embarrassed,” to “María está embarazada” when it should have been, “María está avergonzada.” “Embarazada” means “pregnant.” Another common mistake by the media is to ignore adding the ~ on the n (eñe.) The Spanish language has 27 letters, while English 26. The letter “ñ” has a special sound and the tilde is an integral part of it. An example is “caña” (sugar cane, or fishing rod) which means something different than “cana” (gray hair.)

The accents on the vowels are also extremely important and should not be omitted because they alter the meaning of the words. An example is “papa” (potato) and “papá” (dad.) “Who wants his father to become a tuber?,” asks Elio Leturia, the artist responsible for these posters.

Additionally, Spanish is a language that presents gender as opposed to English. Nouns, adjectives, articles are masculine, feminine and neutral in both singular and plural forms. An example is saying “el amigo” which means the male friend and “la amiga,” the female friend.

On January 23, the Instituto Cervantes of Chicago offered an opening reception for this graphic design exhibit. Hernando Rojo said that speaking and understanding Spanish [correctly] is very important in the country because people who see or read information from the media can be offended or confused.

The ‘No Literal’ exhibit is relevant, and denounces the lack of good [writers] in the media in the United States … [The good use of the Spanish language] is a necessity and urgency, which has not improved in recent years,” Hernando Rojo said. “There are people who do not make an effort to speak the language correctly or have no interest in learning” and this show tries to improve the use of the language, she added.

‘No Literal’ will remain open at the Instituto Cervantes of Chicago until February 22.