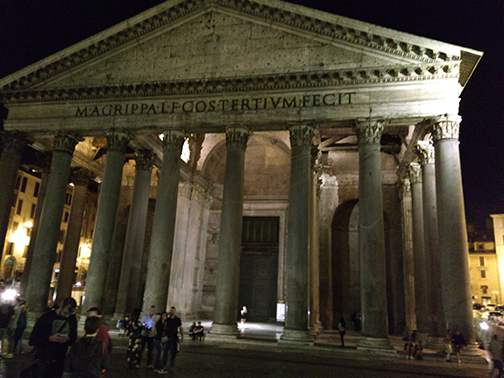 The Colosseum and the Trevi Fountain persuade many to visit Rome. Personally, these were not sites I was very interested in seeing. I was part of the Layers of Rome study abroad course visiting Rome, Italy.  On a bright sunny day, our class went out to look at a monument that is one of the last remaining buildings from the Roman Empire dating back to the 2nd century, the Pantheon. The word Pantheon means a temple dedicated to all the gods. Looking back on that day, I was filled with both anticipation and joy for this became the main reason I wanted to go to Rome. The Pantheon, a structure that not only survived the era of  Roman rule but that served different purposes as the years progressed. To this day the Pantheon is still in use as a church and a tourist site.

As the class moved closer to Piazza della Rotonda, where the Pantheon sits, we were instructed to close our eyes. My heart began to slow down and time seemed to grind to a halt.  I can still recall what Professor. Weber said, “if you want to experience something amazing I suggest closing your eyes and then open them when we turn the corner. You don’t want to miss out on this experience”. Yet nothing could have prepared me for seeing the Pantheon for the first time; seeing one of the most iconic engineering marvels. The Pantheon not only stops you but holds you in place for what seems like a small eternity. All while reinforcing that the things I read and watched about it’s grandiose scale are in fact true. This was not just limited to the outside but was translated to what was to come inside. Walking past the Pantheon’s massive columns and doors  inside revealed awe and amazement as my eyes darted about the room trying to take in everything all at once. There is no amount of research that can prepare one for the reality of this structure. In fact, the thing that draws people’s eyes isn’t the church that is inside, but the Oculus located at the crown of the dome, and I was no exception.  I had found myself, looking up at the oculus in all if its grandeur and how the sunlight cuts into the room. One cannot help but ask, how was this made before modern technology?

Before this experience, I read a chapter in a book called The Role of the Sun in the Pantheon’s Design and Meaning by Robert Hannah and Magli Giulio. In the book it points out  that the architect of the building designed the dome to give multiple moods by using natural light. This is also shared in The Pantheon by William L MacDonald and in Indra Kagis McEwen’s work Hadrian’s Rhetoric I. Both share the common idea that Emperor Hadrian did not construct the Pantheon. Yet what stands today is the reconstruction by Hadrian and thus the credit goes to him.

When looking at the building it is clear that the Oculus, which  is located at the crown of the dome, is used for two things. The primary reason for the Oculus is that it is the only other source of light beyond the entrance. It is clear that the entrance is not enough to illuminate the building on its own. Thus the oculus provides enough light into the structure. Secondly, due to its size, the oculus is able to indicate the time of the month based on the position of the sun. Due to this, Romans were able to manipulate the light, so that based on the time of the year the oculus would illuminate statues of gods. After the rise of the Catholic Church the old pagan gods were removed and statues of saints replaced them. Though the statues are no longer there the light shining through the oculus still illuminates the  niches. To this day I will never forget the first time I turned the corner and  I gazed upon the Pantheon.

Editors note: This column is one of a collection of journals kept by University of Texas at El Paso students during their 2017 study abroad experience with the program, The Layers of Rome. The Layers of Rome is both a study abroad program and an online educational resource for high school and college teachers who study Rome and its central role as a creator and disseminator of world culture.