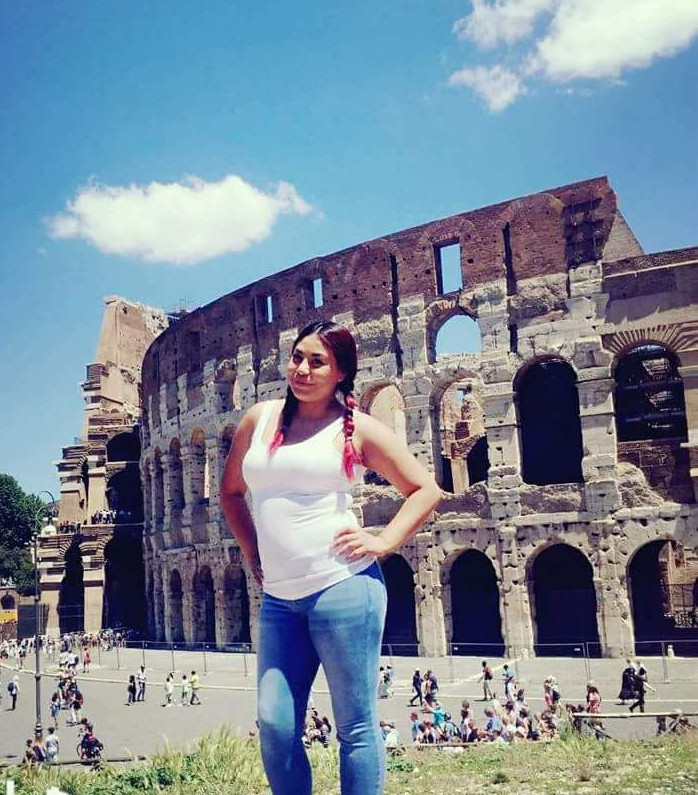 Growing up in a bilingual environment meant I was fortunate to have the opportunity  to learn at least two languages. I grew up in the border city of El Paso TX., right next to Juarez Chihuahua MX. I was fortunate enough to grow up bilingual. Unlike most US citizens who are monolingual, my background enabled me to feel more  natural when in Rome.

This past summer I traveled to Italy as part of the Layers of Rome study abroad course hosted by the  Humanities Program of the University of Texas at El Paso. We stayed in Italy for 3 weeks, visiting Rome, Florence, Pompeii and Milan. Every place created memorable experiences and an opportunity to use my bilingualism in Spanish and English. Because of my  linguistics and speech major and my knowledge of Spanish, I looked  forward to the challenge of working and studying in the environment that uses the Italian language. Although I didn’t know Italian, I felt it to be familiar because of its similarity to Spanish. For me the experience of navigating through a new language but knowing Spanish was memorable. In addition, I had the opportunity  to meet Lin Joey Li, a foreign exchange student from China studying in the U.S. I was curious as to how he would adapt to the culture and language of Rome.

Lin is currently studying at Kirkwood Community College and is originally from Zhengzhou, China. Lin believes English is the most popular language in the world. He used to think that people in Europe could speak and understand English, so he expected that all Italians would be able to speak English too. When he discovered that English was not understood as broadly as he expected, it was not easy for him to communicate with local people. But the good thing was that almost everyone could get a gist of what  he was saying. As a result, Lin said “language as a barrier,  made life in Rome more exotic and intriguing”. Still he wanted to get a general perspective of this  new culture. One day  a group of us went to a laundromat and we called an Uber cab. The Uber was big enough to fit everyone, but we could not understand the driver, so it felt like he didn’t want to make the adjustment and so we called another cab. Lin and I felt that the driver was either annoyed by our inability to speak Italian or the fact that we are Americans. We ran into a similar language barrier when  ordering at restaurants and shopping at stores. The way we bypassed this barrier was easy, we often  just handed  stuff to the clerk or  pointed at an item on the menu. One of my own personal experiences was when I was ordering food at Ai Bozzi,  a restaurant in a neighborhood called Trastevere. I tried ordering a piece of chocolate cake and instead they brought me some chocolate Mousse.  Because of the language barrier I was able to try chocolate Mousse for the first time.

As a Mexican American, I expected Italian and Spanish to be similar since they are mutually intelligible to a certain degree. I remember seeing on Spanish TV interviews with Italian futbol players; they spoke Italian, but were not translated or subtitled because Spanish viewers were expected to understand what they were saying. Of all the Romance languages, Italian and Spanish are especially close because their vowel systems are similar, and this is probably the most important aspect for intelligibility. A person’s native language routinely obliges  us to specify certain types of information, to be attentive to certain details in the world and to certain aspects of experience that speakers of other languages may not be required to think about all the time. And since such habits of speech are cultivated from the earliest age, it is only natural that  native speakers can settle into habits of mind that go beyond language itself, affecting  experiences, perceptions, associations, and feelings.  For me my experience helped me understand the duality of language. On the one hand languages are not so different, on the other, it’s how we use and interpret it which  can bring anyone an unforgettable experience just like mine.

Editors note: This column is one of a collection of journals kept by University of Texas at El Paso students during their 2017 study abroad experience with the program, The Layers of Rome. The Layers of Rome is both a study abroad program and an online educational resource for high school and college teachers who study Rome and its central role as a creator and disseminator of world culture.