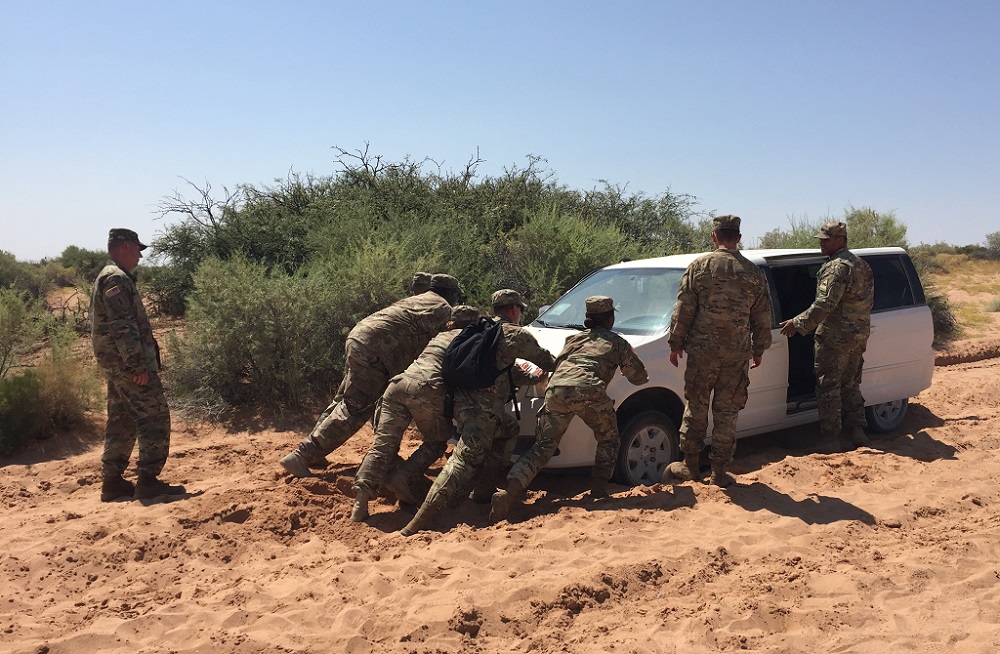 Soldiers work to get a vehicle out of the sand during a recent training exercise at Fort Bliss Army post. Photo by Elizabeth Vega for Borderzine.com

After more than six months, Brandon Westcott can finally relax, but only for a short while. Westcott, a December 2016 UTEP graduate, submitted his Officer Candidate School packet for the United States Army in February. A physical, five recommendation letters, physical training test, and an interview later, he finally received the answer he was hoping for: Accepted.

“Usually most people who want to become an army officer do ROTC (Reserve Officers’ Training Course) or go to a military institute like West Point,” Westcott said. “I did ROTC for one semester at UTEP but couldn’t stay in and keep my minor of Intelligence and National Security Studies because ROTC has to be made your minor. I also joined late and it would have pushed back my graduation date, so I decided to graduate when I was supposed to and submit my OCS packet as a civilian.”

To qualify for Officer Candidate School as a civilian, as in Westcott’s case, an individual must be a U.S. citizen, hold at least a four-year college degree, be between 19 and 32 years old and eligible for secret security clearance. Prospective candidates who meet the requirements must then submit a minimum of three recommendation letters, an essay of why they want to join the army and then meet in front of a board of officers for an interview.

Westcott will leave next month for a 12-week basic training, followed by another 12 weeks of Officer Candidate School, all in Fort Benning, Georgia. Upon graduation and with a commission as a second lieutenant, he will become a part of the 2,400 officers produced by OCS yearly, and a part of the 95,000-103,000 total US Army officers, most from the three primary ways (ROTC, US Military Academy, OCS) of joining the military and serving the country.

Although the number of commissioned officers fluctuates from year to year or at the direction of the U.S. President, Army ROTC is the second largest commissioning source in the Army, behind OCS, according to the US Army Cadet Command.

The number of officers commissioned through ROTC fluctuates annually, although 5,425 second lieutenants will be commissioned this year and the the number will increase to roughly 5,600 in 2018 depending on the needs of the army. The U.S. Military Academy statistics are relatively stagnant from year to year, with little variance, according to CPT Clark Tucker of the US Army Cadet Command. West Point Military Academy currently has more than 4,000 cadets total that will be commissioned as second lieutenants upon graduation.

Among those who took the ROTC route prior to being commissioned is Maj. Shea Asis of the 24th Press Camp Headquarters. A December 2000 graduate of Boise State, Asis joined ROTC on a “whim.”

“When I was in high school, I ended up doing Junior ROTC and when I went to Boise State, they had the same program, just at the university level so I thought, quite frankly, ‘what an easy grade’ because I had already done four years back in my high school,” Asis said.

“I ended up liking it. I did the program for four years at which point I graduated with an undergraduate degree and I was commissioned as a second lieutenant of artillery,” he said.

A 39-year-old father of three, Asis has done two tours of Iraq, a peacekeeping assignment in Kosovo and a year in Korea. Although he had a baseline knowledge of his duties to lead soldiers upon his commission as a lieutenant, he says that the sergeants under his command in his unit are there to provide support to commissioned officers.

“The sergeants knew that I had the basics, they were there to help refine me,” Asis said. “I know that there are some people that go in [as an officer] and they’re a bit rough with the sergeants, and there are other people that realize where they come from and they take the sergeant’s’ advice. I was one of those that took the advice so I didn’t have too much of a problem.”

Asis said the sergeants provide subject-matter expertise within the unit, and although ultimately the officer in command is responsible, the sergeants have a lot of impact within the organization and should be utilized properly. His advice to individuals who wish to become military officers is that there is no one right way to enter.

“At the end of the day, I’ve met people throughout all of the routes,” Asis said.

“I chose the ROTC route, I’m happy at the end of the day at what I did. I love what I do. I don’t have any qualms. I know some people that wanted the enlisted experience and went to OCS and I know people that were super smart and went to the military academy and it just worked for them. It’s just whatever their goal is, however you want to get there.”