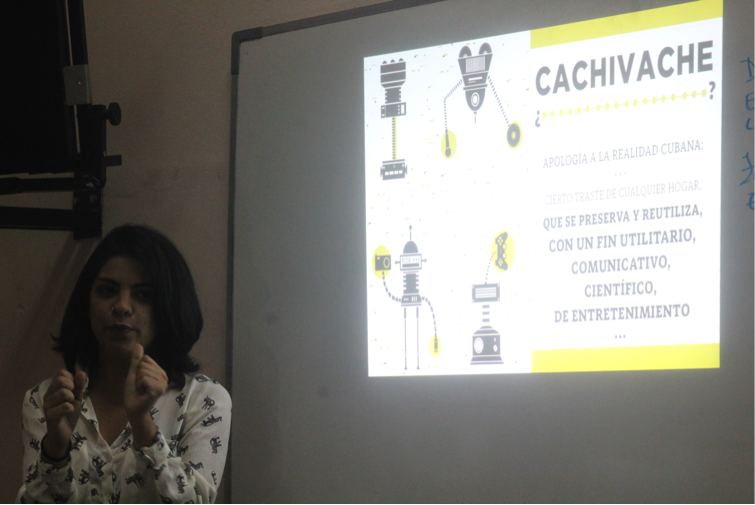 The word cachivache translates to junk, or rubbish, but in Cuba repurposing junk, in this case technology, is an aspect of daily life. That’s what a group of entrepreneurial University of Havana Communication students did a little over a year ago when they reengineered existing and accessible media technology to create a hip web magazine catering to Cuban citizens.

Cachivachemedia.com was the product of their creativity and persistence and is indicative of the Communist country’s spirit of endurance, resistance and innovation after 50 years of a U.S. economic blockade and political standoff. The magazine is currently on hold as its staff considers its future direction.

Daniella Fernandez, 21, an under graduate student at the University of Havana and community manager for the web magazine, explained why the magazine she helped launch 18 months ago was named after the Cuban word for junk.

“Cachivache is this old technological thing; it could be a TV, a phone, Russian, Chinese, whatever comes to Cuba and how we use it and transform it to our own necessities here in Cuba,” Fernandez said during an interview with a UTEP student in Havana this summer. “That’s a very common thing to do. Its done in medicine; its done in education; its part of our culture; taking advantage of what we have.” Daniella Fernandez in front of a mural of Independence hero Jose Marti inside the Instituto de Periodísmo Jose Martí in Havana.]

She said the magazine focuses on writing about technology, communications, culture and how Cubans have had to find innovative ways to connect to the rest of the world despite a lack of access to new media technologies and software.

“We try to do journalism in different ways,” she said, and adds that Cachivache Media has become a “love triangle between technology, communication, and society.”

Richard Gonzalez, a Political Science major studying at UTEP, was one of a group of 14 UTEP students that traveled to Havana as part of a travel abroad experience to learn about Cuban culture, media, and society.

During the eight-day study tour, the UTEP students spent a day at the national Instituto de Periodismo Jose Martí where they heard Fernandez’ presentation about cachivachemedia.com and another by a journalist on Cuba’s environmental challenges.

After listening to Fernandez, Gonzalez said he realized that, “Cuban millennials are no different than millennials (in the U.S.) They don’t exist in some vacuum devoid of technology like I feel many people might assume. You can just as easily speak to them about Game of Thrones or Pokemon as you could any kind of political question.”

Launched in February 2016, Cachivache Media was originally the idea of three Cuban communications students at UH, who have since graduated. Unlike major media in Cuba, which is state-run, Cachivache Media is an independent project financed by the Argentinian editorial company Resumen Latinoamericana. Fernandez joined the team before the magazine officially launched and began to publish. Her role has been to oversee promotion and social media outreach.

In its first year, the magazine published 235 pieces and developed a large following on the website, on social media, and through podcasts. They estimate that if a visitor to the site were to read all the content it would take them 129 days of uninterrupted reading, which they calculate as the equivalent of reading One Hundred Years of Solitude by Gabriel Garcia Marquez some 360 times.

Cachivache is produced by a group of designers, communicators, journalists, and collaborators. With a small staff of just five, it invites community members to contribute stories and photos.

One contributor pitched a story idea about a Cuban man that had begun a dating service online similar to what U.S. actor Will Smith did in the popular movie Hitch. It ran on Cachivache.

Cachivache faces obstacles such as access to new technology and software that U.S. media outlets do not, as well as scarce and expensive Internet access which makes reaching Cuban citizens difficult.

Fernandez blames the difficulties in part on the U.S. embargo, which she refers to as a “blockade” and “antihumano” because it hurts not just the Cuban government but also the entire population. “They’re screwing with us. Forget about the government; they’re screwing with Cubans here in Cuba,” she said.

According to Reuters, the Cuban government had opened nearly 240 public Wi-Fi spots by the end of 2016. For an approximate population of 11 million, that translates into 45,830 persons per one Wi-Fi spot.

Emilio Suarez Gonzalez, 23, is a graduate of the College of Communications at the University of Habana and is now the Management Specialist of Patrimony Documentation in the Historical Office of the City of Habana.

Suarez said that to gain access to Wi-Fi he usually returns to his alma mater that has the service. Sometimes he purchases an ETECSA (Empresa de Telecomunicaciones de Cuba S.A.) Wi-Fi card. The card costs several dollars for an hour of Wi-Fi and is popular with tourists and some citizens.

“Basically, Cubans get all kinds of technology despite the blockade. What could be needed is to increase the bandwidth and the possibility to contract services via Internet,” he said.

Another hurdle is getting access to websites. The act of getting online is a testament to Cuban persistence, said Suarez, who explained how citizens “generally utilize VPNs (Virtual Private Networks) to connect and proxies to avoid the blockade of content and websites.” A car zooms by in Havana, Cuba.

With unpredictable access to the web, the Cachivache staff must work around the limitations, doing the best with what’s available.

For instance, Cachivache staff worked around the scarcity of Internet connectivity by designing the website’s mobile app to download all of the new content whenever Wi-Fi is available so readers can access stories offline whenever they want.

Fernandez said Cachivache is an example of journalism innovation in a country with a strong state-run media. “You sometimes see journalists, new designers, new communicators, coming up with new ideas,” she said.

Fernandez has a unique viewpoint on U.S.- Cuba relations because of her background.

“I’m Cuban and I’m part Philippine,” she said. “I lived in the U.S. for five years because my parents were diplomats. I have this insane love for the U.S., for the people, and I hate Trump,” she teased, with a smile on her face.

She added that for her generation the decades-long political standoff between Cuba and the U.S. is “just so tiring.”

As for most Cubans on the island, her respect for U.S. citizens is blended with some reservations and concerns as to why ordinary U.S. residents do not push the government to end the embargo.

Following a partial political opening between Cuba and the U.S. under former President Obama, after taking office President Trump decided to eliminate “people-to-people” travel to the island which means they can only visit as part of an approved tour. Trump also said U.S. citizens will no longer be able to stay in Cuban army run hotels or do business with other army-related enterprises.

“If Trump would have continued the process that Obama started… maybe things would have come different,” Fernandez said.

She added that ordinary Cubans see the embargo not just as hurting them but harmful to the U.S. as well, losing out on “possible mutual benefits.”

Sandra Dominguez, a UTEP Communication student who participated in the study abroad tour, said: “One of the things that caught my attention was listening to older folks speaking about the revolution… The older people stood strong with the revolution and were extremely proud that Cuba has been able to be successful despite the 50 years of embargo.”

She heard a different narrative from younger Cubans. “Millennials want to put the past behind them and have a relationship with the United States, to collaborate together and see what kind of technological and health advances could be achieved if the diplomatic relationship was patched up.”

At the same time, U.S. and Cuban Millennials have much more in common than did the previous Cold War generations. U.S. Millennials are a Netflix/Facebook-loving, selfie-taking generation, often are accused of being obsessed with technology.

While Cuban Millennials also enjoy Netflix, use Facebook and take selfies, how they gain access to these tools and consume media is different. Cubans have to hack licenses and programs and borrow USBs with downloaded HBO and Netflix content.

During her visit to the island this summer, UTEP student Dominguez experienced first hand young Cubans’ cachivache mentality of repurposing and adapting old technology to fill a present need.

“I remember we were walking through La Vieja Habana late at night and someone invited us to their home to play FIFA with them,” she recalled. “Although this game needed a console such as a PS4 or Xbox, they had ‘cracked’ the game so they could play it on an older computer.”

Fernandez jokes that, “we know more about you guys (Americans), from the American pop culture, than what you actually know of us.” She says she is fascinated by TV shows such as HBO’s Young Pope and Netflix’s Bojack Horseman. She even watches controversial U.S. comedian and talk show host Bill Maher, who has joked about Havana possibly becoming a popular spring break destination if the embargo is lifted.

Fernandez shares the belief, as do many of her generation, that it’s time for both sides to put aside old animosities and work together in areas of common interests like healthcare, social rights, gender equality, affordable quality education.

“Fidel Castro has passed away. Che Guevara passed away… You guys do trade with China. With China! And we are a small island. You guys are not in any danger military speaking because we don’t have any resources. Why is the government so afraid of us?” she asked.

“We’re in the 21st century. Millennials have a different way of connecting with people, I think. We don’t care if your hair is green or blue or black if you’re poor or Indian or Mexican–we just don’t care about those things. We accept people. So why is this still a conflict?”