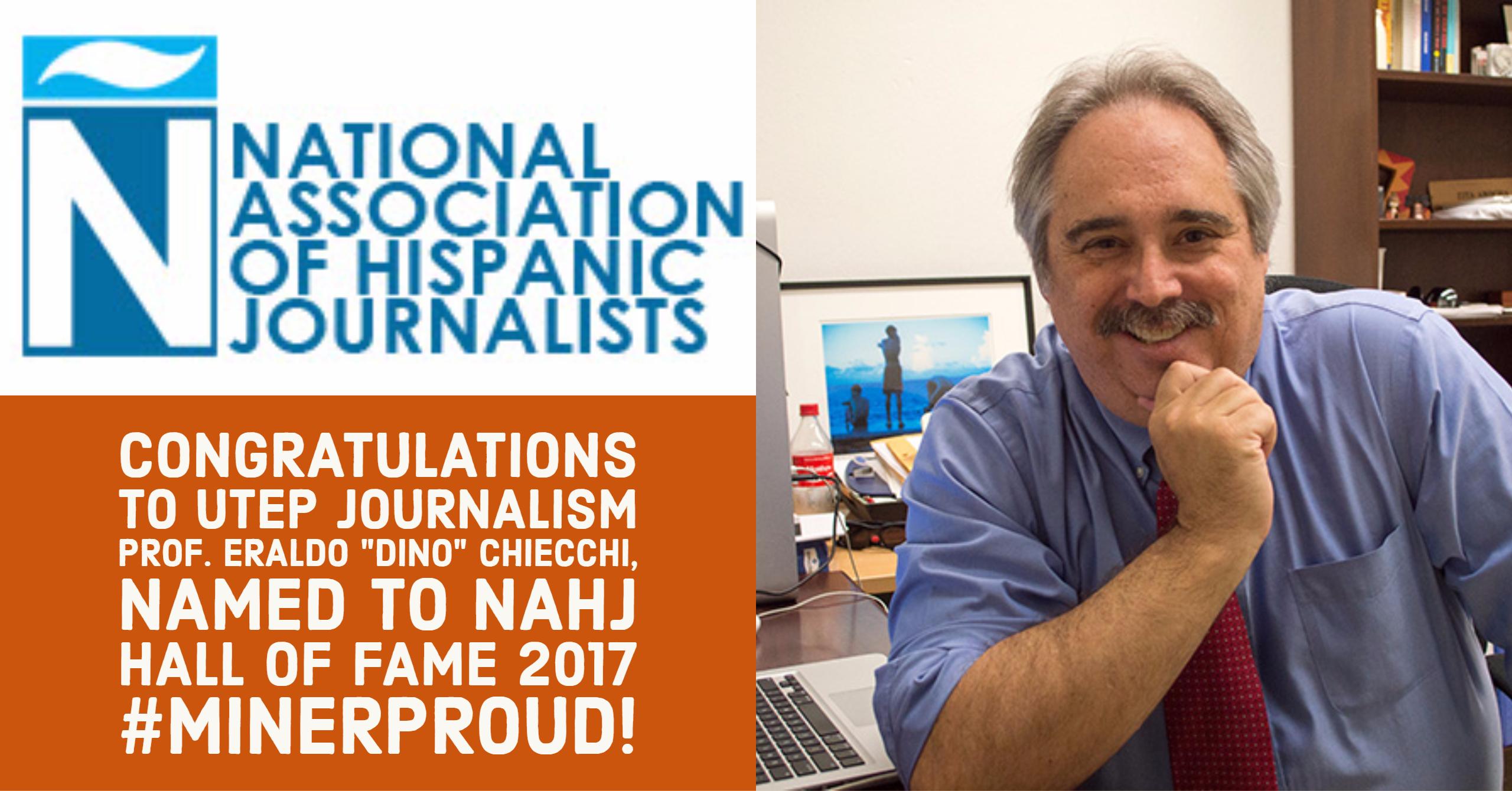 A career in journalism took Dino Chiecchi from a humble start at UTEP to jobs with top publications, world travel and industry leadership on a national level.

UTEP associate professor of practice and the incoming executive editor of Borderzine, Eraldo “Dino” Chiecchi, has been named to the National Association of Hispanic Journalists Hall of Fame for 2017.  Chiecchi is one of five of the nation’s top journalists, academics and documentarians who will be inducted into the NAHJ Hall of Fame during the group’s annual convention in September in Anaheim, California. Zita Arocha, Borderzine’s founder and an associate professor of practice in journalism at UTEP, was inducted into the NAHJ Hall of Fame in 2016.

“The board unanimously approved five candidates that I look forward to celebrating this September at the national convention in Anaheim, California,” stated Brandon Benavides, President of NAHJ.  “With diverse backgrounds, these individuals have made contributions that continue to impact and benefit our colleagues and industry for the better.” Throughout his career, Dino Chiecchi has never lost sight of the vital role he played as a mentor to young Hispanic journalists in U.S. newsrooms. He has always been an advocate for Latino representation in newsrooms and for accurate coverage of Hispanic communities. Today, Dino puts his experience, his dedication and his drive as a professor of practice at the University of Texas at El Paso to training a new generation of bilingual journalists. In his time at UTEP, Dino has reinvigorated the journalism program in the classroom and reenergized the student chapter of NAHJ. In fall of 2017, he becomes executive editor of Borderzine, UTEP’s bilingual student publication and capstone course for journalism majors. He is the immediate past president of the Texas Associated Press Managing Editors as well as a past president of the National Association of Hispanic Journalists.

Federico Subervi, Ph.D., is a researcher and scholar on Latino media and audiences. Before joining the JMC faculty at Kent State University in fall 2013, Subervi served as professor and director of the Center for the Study of Latino Media & Markets at the School of Journalism and Mass Communication at Texas State University in San Marcos, Texas, where his research and teaching focus was on exploring the relationship of ethnic minorities to the mass media, especially the Latino community. He is the editor and author of The Mass Media and Latino Politics: Studies of U.S. Media Content, Campaign Strategies and Survey Research: 1984-2004, along with more than 25 book chapters, more than 20 journal articles and more than 15 independent reports. He has led the “Brown Out” reports examining the nation’s major English-language television networks’ and from 2011-2013 he was the first Academic Officer of the Board of Directors of the National Association of Hispanic Journalists.

Most recently, Andrés Cediel served as faculty advisor to the NAHJ-University of California, Berkeley student chapter. Through the position he constantly guided, motivated, and set an example for those who were concerned about the lack of Hispanic representation on a newly appointed advisory board at the School of Journalism. Colleagues and students witnessed Andrés encourage them to question, present concerns and provide suggestions to the Dean and other administrators. Andrés’ recent work focuses on exposing the labor conditions and sexual abuse of different migrant communities – child laborers, female janitors and farm workers. Not only has his work uncovered injustices in the Latino and migrant communities, but he has also promoted change in the language used to describe these groups. He has openly advocated against the use of the word “undocumented” and other terms dehumanizing to migrants, arguing that it is incorrect to describe a person by something they lack instead of something they are. Apart from his own policy – changing work, he has challenged those around him to question their own reporting of Latinos and Hispanics around the country.

A strong supporter and lifetime member of NAHJ, Jodi Hernandez once was a student member who participated in the Student Project and after went on to lead the project as a professional. Over the years she has selflessly devoted her time before, during and after national conventions to lead “El Noticiero,” The 30-minute television student newscast project, helping lay the foundation of success for young broadcast rising stars, such as NBC network correspondent Miguel Almaguer and Univision anchor Satcha Pretto. Her passion for journalism, desire to be a reporter and her determination to succeed led her to accept her first job as a producer at KCPM in Chico, CA as a stepping stone to a reporting opportunity at ABC affiliate KAKE in Wichita, Kansas. Ultimately, Jodi reached her goal of getting back home to the Bay Area to be near family and her Alma mater –UC Berkeley.   The nominations received for Jodi demonstrated that throughout her career, Jodi has lived by NAHJ’s mission –to excel as a journalist who accurately covers communities of color and as an advocate for more Latino representation in TV newsrooms, inspiring the next generation of news media professionals.

For more than three decades, Nancy Rivera Brooks has worked to foster more insightful and sophisticated coverage of the Latino community in the Los Angeles Times. She was one of 17 Mexican American Times staffers reporters, editors and photographers who produced the groundbreaking and Pulitzer-winning series on Southern California’s rapidly changing Latino community in 1983. As a reporter and then an assistant business editor, she not only has long played a key role in selecting young journalists for the Times’ outstanding MetPro training program, but also mentored them through their time in the newsroom.   Colleagues stated, “She has improved the paper’s coverage of Latinos and, through her mentorships, extended that work through her protégés, both inside and outside of the Los Angeles Times.”

About NAHJ: The National Association of Hispanic Journalists (NAHJ) is the largest organization of Latino journalists in the United States and dedicated to the recognition and professional advancement of Hispanics in the news industry. The mission of NAHJ is to increase the number of Latinos in the newsrooms and to work toward fair and accurate representation of Latinos in news media. Established in April 1984, NAHJ created a national voice and unified vision for all Hispanic journalists. NAHJ has approximately 2,000 members, including working journalists, journalism students, other media-related professionals and journalism educators.

About Borderzine: Borderzine is an innovative teaching newsroom that trains and mentors bilingual journalism students with the reporting, writing and multimedia skills they need to be competitive. Since 2008,  the digital magazine Borderzine.com has published rich, relevant content about the borderlands produced by student journalists at UT El Paso and our partner schools across the U.S. and Mexico. Through its extensive network for internship placement and post-graduate support, Borderzine has helped prepare multicultural student interns and graduates for jobs with English and Spanish media outlets throughout the United States and abroad.