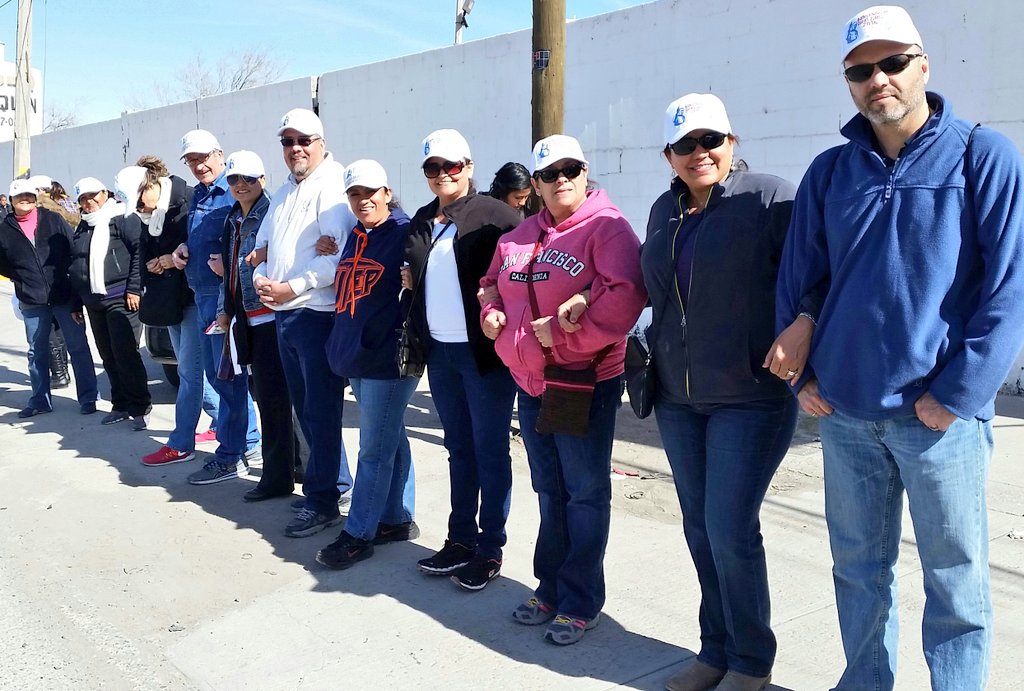 JUAREZ — El Paso resident Rafael Sañedo, 21, drove cautiously down several Juarez city streets on a recent Sunday as he headed toward San Lorenzo Plaza to rehearse his part in the 25-mile-long human chain that will greet Pope Frances when he arrives in Juarez Wednesday to deliver a historic Mass at the old Juarez Fairgrounds, called El Punto.

“Juarez has changed a lot throughout the years,” said Sañedo, a pet store employee, who has not crossed an international bridge from his home in El Paso into Ciudad Juarez for the last decade. The last time he visited Juarez was to see his grandmother before she died.

“She was the only reason why we even came, so after she passed away there was no reason for me to come back,” he said.

Several weeks ago Sañedo had a change of heart when, after attending Mass at Saint Mark Catholic Church in east El Paso, he heard an announcement asking for volunteers to help form a human wall, referred to as lLa Valla. An expected 50,000 area residents from both sides of the border will form the human chain to greet the Pope along a designated route when he arrives at 10 a.m. Wednesday. That morning, Sañedo plans to be at his selected spot on La Valla at 5 a.m. with a dozen other Saint Mark church members.

“When I heard Farther Arturo announcing that they were requiring volunteers for the human wall I figured that this could be the chance for me to go back to church and be involved with religion,” he said. “I felt like God was calling me to get involved.”

Although his parents are also members of St. Mark’s church, he said they opted to spend the day in El Paso and perhaps attend the Mass virtually at the UTEP Sun Bowl Stadium simulcast.

Both sides of the border make plans for pope event

Both Ciudad Juarez and El Paso Roman Catholic church leaders and parishioners have spent the last few months in frantic preparations for the pope’s historic first visit to the borderlands, his last stop during a five-day visit to Mexico this week. Dozens of Catholic churches in the El Paso-Ciudad Juarez region have been helping the Diocese of Cd. Juarez recruit the 50,000 volunteers to form the human chain, and as of this weekend were still seeking recruits. To keep order and direct traffic, special volunteers in red caps, called cinturiones, will be on hand throughout the day.

The pope’s visit to the borderlands has elicited widespread school, government office and business closings, the rerouting of traffic in Downtown El Paso and around international border crossings, as well as various construction projects near the old Juarez Fairgrounds, where workers are still putting finishing touches on a building that will be the site of the papal Mass. As he has during visits to U.S. cities, most recently Philadelphia, the Argentinian-born pontiff will stop at a prison to speak to inmates and their families and later at a school where he will visit with local business leaders and maquiladora workers. He is scheduled to celebrate Mass at 1 p.m. at the fairgrounds.

Maria Elena Lopez, 68, who lives near Santa Maria Church in Juarez, is not volunteering to participate in La Valla but looks forward to leaving her house by 4:30 a.m. Wednesday to ride with her daughter Perla Barraza to a location near Cereso prison. Here they plan to snag a spot behind the human chain to catch a glimpse of the Pope Francis as he enters and exits the tough state prison which has suffered from riots in past years. She said she will be joined by her priest and several fellow parishioners from her neighborhood church.

For the past few weeks the Rev. Aristeo Vaca, the priest at Santa Maria Church, has requested donations from church members of bags of coffee and bread to take with them when he and his parishioners head out at 4 a.m. to stand near Cereso prison waiting for the Pope. He has also asked his parishioners not to bring their children because of the early morning cold.

The Rev. Roberto Luna has been in charge of logistics for the human wall of volunteers, and has already held several weekend rehearsals on site. With volunteers expected to stand linked in the human chain for about 12 hours Wednesday, with some scheduled breaks. Luna, the priest at Corpus Christi Church in Juarez who is known as “Padre Beto,” is requesting that volunteers bring only small bags of provisions and not to bring chairs, coolers or cots.

Organizers of La Valla invite anyone interested in participating to call the office of their Catholic church for more details. Part of the process of signing up is to fill out an online application at http://papafranciscoenmexico.org/ White caps that are required throughout the valla

According to the organizers, the volunteers at La Valla will receive lunch and get bathroom breaks throughout the day. Businesses and restaurants along the Pope’s car route have been asked to allow the volunteers to use their facilities. There will be portable restrooms along the route for the public as well.

Another La Valla volunteer on Wednesday is Abril Ramirez, a mother and member of Saint Mark Church in El Paso. She will participate in the human chain along with several thousand other volunteers in the San Lorenzo area of Juarez.

“It’s a big celebration and more than anything this is our service to the pope,” said Ramirez, who will be wearing a white cap that day along with the other volunteers in the San Lorenzo area. “We do this because this is something that does not happen every day,” she said.