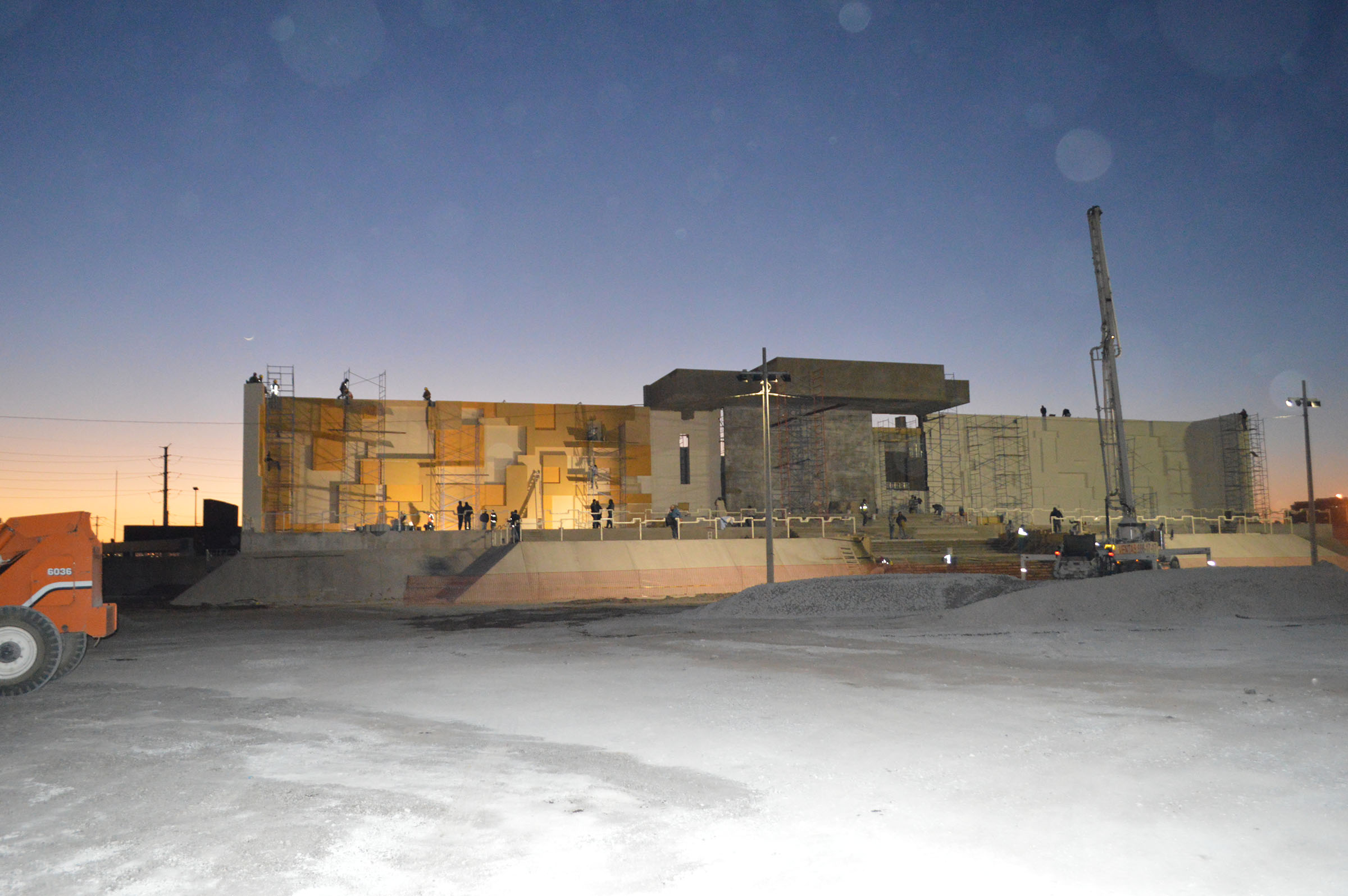 Juarez Bishop José Guadalupe Torres Campos last week from his office in the central part of the city spoke candidly with a group of student journalists and media professionals about his expectations for the historic visit of Pope Francis to the borderlands tomorrow. Foremost in his mind is his hope that pontiff’s one-day visit and message brings healing to the violence-ravaged border city.

“The country continues to bleed in a fight that is so cruel and absurd,” said Torres Campos, who expects that Pope Francis, during visits to a prison and school before celebrating Mass at the former Estadio Olímpico Benito Juárez tomorrow, will address many of the troubling social, economic and political ills plaguing Ciudad Juárez and the border region. Workers have spent the last two months building an altar and podium constructed of local granite mined from an area called Cerro Bola above the Juárez gray-and-brown jagged mountains that surround the city. The pope will celebrate Mass from this location.

Some of the serious issues affecting the border’s 2 million residents, the bishop said, are: “money, drugs, power, corruption, extreme poverty, social inequalities, unacceptable offensive waste, children who migrate alone, abused migrants and more.” Another critical border issue that causes “great damage to society,” he said, is the influx of thousands of migrants and unaccompanied minors from Central America who stop in Ciudad Juarez before making the trek over the border to the U.S.

Torres Campos, who was appointed to head the Diocese of Ciudad Juarez in 2014, said he and other church leaders still marvel at the pope’s decision to include Juarez in his three-day tour of Mexico this week. Once the pope arrives in Juarez, a special car called a Popemobile will transport him along a 25-mile-long highway route lined on both sides by a human chain of about 50,000 volunteers from both sides of the border.

“The presence of the Holy Father in Ciudad Juárez is a surprise,” said the bishop. “Our community had never thought we had the slightest chance of being visited by the pope… This gives us a great joy.”

During the 15-minute interview with reporters, he noted that Pope Francis’ stops at a state prison, at the Casa del Migrante immigrant rights organization, and at a gym at a public school before celebrating Mass at 4 p.m. will inspire hope and love among local citizens. “His visit also represents a strong commitment to Church and society, to live better, grow and foster unity,” he said, noting that this pope is characterized by his “generosity, openness and closeness to the people.”

Torres Campos also repeated many of the previous messages Pope Francis has delivered at political and religious events throughout the world, such as the need for politicians to be honest and transparent and avoid being corrupted by criminal organizations. He also reiterated the pope’s call for the wealthy and powerful to serve others through service and for governments to care for the poor by providing access to adequate food, housing, education and training.

He added that everyone must work together to “to build communities in order to help others heal and prosper.”

Tomorrow’s events begin at 10 a.m. when the pope arrives at Cd. Juárez’ International Airport Abraham González where he will be welcomed by civil and church authorities.

His first stop is at the Centro de Rehabilitación Social #3, also known as Cereso state prison, to meet with 800 inmates and their families. Afterward, he heads for the gym of the Colegio de Bachilleres #2 to meet with maquiladoras employees and business representatives from Mexico and Cd. Juarez.

He is scheduled to celebrate Mass at 4 p.m. before some 200,000 followers, among them thousands of migrants and victims of violence, on the former grounds of the Expo Fair, a few yards from the U.S. border.

He’s expected to return to the Juárez airport on Heroic Military College Avenue, which will also be lined by thousands of volunteers forming a human chain, at about 7 p.m. for a flight back to Rome. Before his departure, there will be a brief farewell ceremony at the airport attended by Mexican President Enrique Peña Nieto.