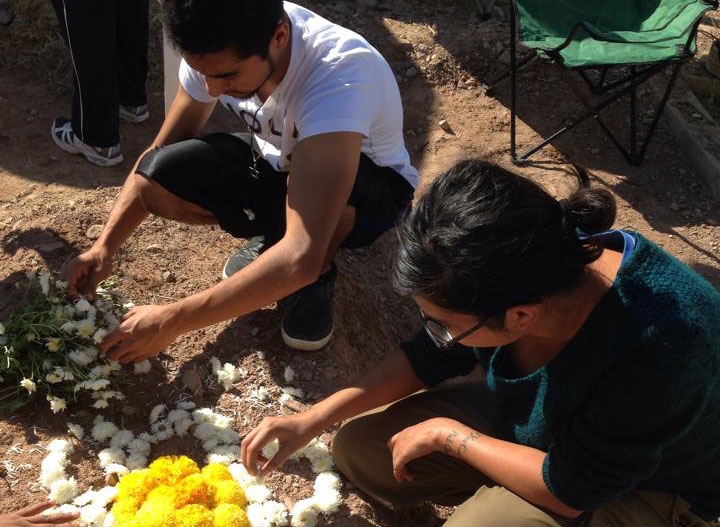 The day before Halloween my mother asked if I wanted to visit her hometown of Torreon, Coahuila, to celebrate the Day of the Dead.

“After 28 years I want to go see my grandmother,” my mother, Blanca, told me. My parents are Jewish and pray for the dead during Yizkor services which correspond with the seasons four times a year. My grandmother always comes to mind in the fall.

So we packed our bags and caught a bus in Juarez for a 10-hour bus ride through Mexico. We arrived in Torreon the morning of November 1 and went straight to our first cemetery to pay our respects to my aunt Mary’s husband’s family.

This was my first time ever celebrating the Day of Dead in Mexico and I was confused, yet excited. Here in El Paso we make altars and eat sugar skull candy, but we do not go tend to go to the graves to pay our respect. In Mexico, as my aunt Marina explained, we buy an abundant amount of flowers that range from Lion’s Paw, Cempasuchil – known as the flower of the dead – white chrysanthemums and lilies. As we walked around the family grave yard, a dozen flower vendors strolled among the graves and headstones, their arms loaded with flowers. Me plucking flowers one by one

When we reached the gravesite, a large mound of flowers awaited us. My cousin Itayetzi began to show us what to do. My 10 relatives and I huddled together to develop a design made of flowers to cover the entire grave. First, an uncle poured a jug of water over the ground to help the flowers stay in place. Then the hard labor began. Working with one flower at a time, we each held a flower head between our middle finger and thumb, pulled on the stem to retain the shape of the flower and placed them one by one into the desired shape. My aunt then said a prayer thanking God for our lives and thanked him for allowing the dead to be part of our lives and our ability to remember them. Over the span of four hours that morning we decorated three family graves.

Later, my entire family (about 20 of us) gathered at a relative’s ranch to eat a meal of chicken mole and rice. To my surprise the next day, November 2, the actual Day of the Dead, the streets around the cemetery were closed to traffic and dozens of vendors selling food and flowers lined the sidewalks. Imagine a downtown market where thousands of people congregate to buy fresh products. I had never seen so many flowers in one place, and some like the red Lion’s Paw I had never seen before.

Once we managed to find a parking spot blocks away from Torreon’s largest cemetery we maneuvered through the crowd of people, found our relatives’ graves and start plucking flowers. That day we decorated three more graves, one of them the burial site of a relative who died at the age of 103 and also my great-grandmother Paulina’s place of rest. My mother putting the flowers on her grandmother’s grave

My mother’s eyes teared up when she approached her grandmother’s grave. She told me that her mother, Juanita, a transplant to Juarez from Torreon who was a midwife and married and divorced seven times, always told her: “when someone dies you move on and you don’t go to visit them because they are not here anymore.”

To me this seems more like a U.S. attitude than a Latin American one. Perhaps that’s why my mother waited 28 years to visit her grandmother’s grave.

During that visit to great grandmother Paulina’s tomb I learned a lot about my mother and grandmothers. As my mother sat down next my great-grandmother’s grave she looked up at me and said “ahi esta mi abuelita Paulina, there is my grandmother Paulina.” At that moment I gave her a handful of lions paw flowers and told her to design something that she would think her grandmother would like.

“I want to make a large red heart, because she had a lot of heart,” she said. She cut the flowers and one by one began to make the design as she spoke about the adventures she had with her. “She taught me how to read at the age of five by buying me books and as she would sew at night. She would take me on political protests even though I didn’t know what we were protesting. She took me on the train from Torreon to Mexico City on the poor side of the train where people had their animals and you had no assigned seating. My uncles would line up, and at the moment the train stopped they would jump through the windows to get us a seat.”

I learned that taking part in a tradition in which you do not forget your deceased brings family together. You cry as a family and you share the memories as a family. You are never alone even after death. After the prayer, my aunt Evita said I realized that even in death you still live in many people’s hearts and they are thankful for the living and the memories the dead created with them.