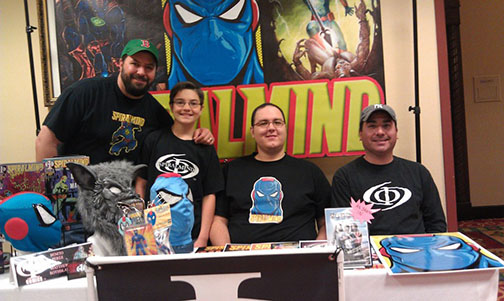 The first three issues of Spiralmind by Phi3 Comics.

Matthew Rothblatt waited for what seemed like an eternity for the first printed copies of the first comic book he created to arrive and when Spiralmind finally did, he asked his wife to get a camera and record the moment as he cut open the box.

“I still remember putting the box on the table, and making my wife take pictures because I knew I’d want to go back to that moment,” said Phi3 Comics co-owner Rothblatt ,43. “I remember opening the box and they were stacked in there in all this shredded paper and had a band around them.

Seven years later, Rothblatt and co-owner Ben Perez are still producing comics and working on getting their character, Spiralmind, recognized around the world. Spiralmind battles evil characters using mental powers that can manipulate reality across dimensions.

“The business has exploded in the last six, seven years,” Perez said. “When we first started, we had to teach ourselves the process. We didn’t have a lot of options in the beginning. We read a lot of different books, even when we didn’t want to, to learn the process.” Phi3 comics (pronounced “fee three”) are available on the Comixology app and Indyplanet.com. Rothblatt and Perez are also working on a 160 page graphic novel.

Over time Rothblatt and Perez have built up a network of other authors and illustrators who have helped Spiralmind grow. “Going to Comic-Con events in Phoenix, Albuquerque, and San Diego and through Facebook, we’ve connected with a lot of artists from around the world who want to draw Spiralmind,” Perez said. “They have been from Rome, Israel, Brazil, and the Philippines.”

Perez said their biggest fan base is in Albuquerque. The El Paso market has been slow to catch on.

“It’s hard to grow and get embraced locally. We do have supporters, and they take out ads in our books. But the local comic book shops haven’t embraced us,” he said.

Meanwhile, fans continue to discover Spiralmind and one has even helped get the character time in movies. “I met Ben and Matt at EPComicCon,” actor/filmmaker Frank Powers said. “I was really interested in their character and they even let me produce a live action Spiralmind film here in El Paso.”

Powers said he had some friends who worked on the 2013 creature feature “Big Ass Spider,” who then introduced him to director, Mike Mendez.

“When Mike was working on his Syfy channel movie ‘Lavalantula’ he invited me to come out to LA, and I asked Matt to come with me. I got to play Spiralmind in the movie and Matt had a background role, too.”

Now the friends are hoping to catch the attention of actor Danny Trejo at a film festival in March where the “Machete” actor is looking for pilots to turn into a TV series.

“We’re hoping it gets picked up and I’ll get to play Spiralmind,” Powers said. While they chase opportunities for a larger audience, the team behind Phi3 comics is still focused on producing a good product.

“We really take our time to make sure the story looks good and the art looks good,” Rothblatt said. “We just want to be able to get it successful enough to where we can continue doing this, continue going to Comic-Cons, continue meeting our idols and kind of our mentors now. I get inspired by other people. If everybody helps each other everyone is going to win.”

Spiralmind made an appearance in the movie “Tales of Halloween” on the Syfy Channel, Thursday, Oct. 16. The character will also be at Sun City Scifi in El Paso Saturday and Sunday, Oct. 17th-. Sun City Scifi will be at the Camino Real Hotel. Single day passes are $12.50, Weekend passes are $22.50. Tickets can be purchased at suncityscifi.com.