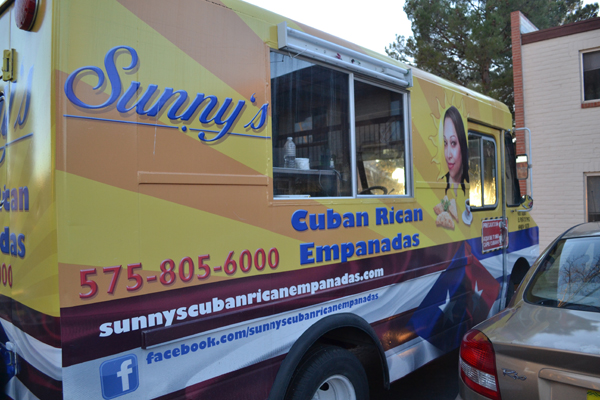 Every Friday, Helio Gonzalez and his wife Sunny Sapien load their yellow food truck with homemade Cuban empanadas and ‘cafe Cubano’. They park on Remcon and Mesa in West El Paso. Their truck, emblazoned with a the sign, “Sunny’s Cuba Rican Empanadas,” does brisk business all weekend, especially during the lunch hour.

Gonzalez, 28, a law enforcement officer in El Paso, was born in Miami of Cuban parents. As a child, he traveled to Cuba twice to visit his grandparents and extended family in the east side of Santiago. Sunny, 32, was in born in El Paso to a Cuban father and a Puerto Rican mother. She has never visited either island, although she still has distant cousins there.

Despite their family being on the island, their connection is as strong as a Cuban cigar. The late December announcement by President Obama and Cuban leader Raul Castro that the U.S. and Cuba will work toward resuming diplomatic relations after 55 years left them both cold. This month at the Summit of the Americas in Panama City, both leaders shook hands.

Cuba could already start seeing some of these changes little by little, Gonzalez said his grandfather, who is in his early 60s, visits Cuba every three months and is starting to see small-scale businesses pop up in Cuba owned by residents.

“I am for resuming relations with Cuba, but at the same time its only going to be beneficial if they (the Cuban government) compromise as well,” said Gonzalez. “Some of the areas that need improvement are the right to decide your own destiny to be who you want to be, and allowing Cubans to own their own businesses.”

Many Cubans have conflicting emotions toward Obama’s actions to improve relations with Cuba. It has been 56 years since Raul’s brother, Fidel Castro, who won the 1959 revolution, cut all ties with the U.S. and restrained Cubans from leaving their home country and from owning businesses.

Although he has love for Cuba and his roots, he has decided not to visit as often as he did when he was a child due to the lack of opportunity in Cuba. Gonzalez said in order for Cuba to see change, the dictatorship must also change in the way Cuba operates its country.

“The fact that the U.S. is going to have an embassy in Cuba soon is good,” Gonzalez said. “The Cuban government hasn’t done a good job in hiding everything, everyone knows Cuba is mess. People who have relatives in Miami know there is a better way of living.”

Sapien believes that the Castro family needs to make changes in their government to show their people they are ready for their country to make a transition.

“What’s going to save the people in Cuba is the fact that they are going to be able to have a newer Castro generation to take over,” Sapien said. “Hopefully the newer generation is able to help the Cuban people because younger generations seem to be more open minded about what is going on in the world.”

Sapien said she would consider taking her business to Cuba and purchase products for her food business. She looks forward in seeing change and hopes to one day go visit and met her extended family from her father’s side.

“We are going to be able to take our businesses over there and be able to improve their economy,” Sapien said. “I feel more comfortable that there is an embassy there, I can definitely see us going and visiting old family where they were raised and finally get back to our roots.”

Cubans living in El Paso are a minority in the city’s population. El Paso is a majority-minority city with 81 percent Hispanics but less than one percent is Cuban who own a few businesses.

“Given our location, diversity, and economy we won’t experience any relevant changes in our economy,” Pamela Morales, communication coordinator for the El Paso Hispanic Chamber of Comers said. “It is also relevant to mention that the Cuban economy is relatively small, and their labor force is in its majority service-driven, hence the minimal impact.”

Morales said any other change in the national policy, businesses should analyze the opportunities and the threats.

“It is quite common to see agricultural and food imports moving to Cuba, as well as chemicals and machinery, a new door is always an opportunity,” Morales said.

Although there will not be a significant impact on El Paso’s economy, however having the U.S. embargo lifted from Cuba will be some good news for those of the less than one percent of the Cubans that reside in the borderland community.

Dr. Oscar Varela, a business professor at the University of Texas at El Paso whose wife was born in Cuba and left with her family as a child, said Cuba has been open to a variety of countries like Germany, France, Japan and China for many decades. Those countries have been able to engage in business while the U.S. prohibits firms from doing business with Cuba because of the long-standing trade embargo.

Varela said he is a bit worried if the U.S. starts doing business with Cuba that all profit will go toward the Castro family and not Cuban citizens. Businesses that are planning to operate in Cuba will have to be aware of who they benefit he said.