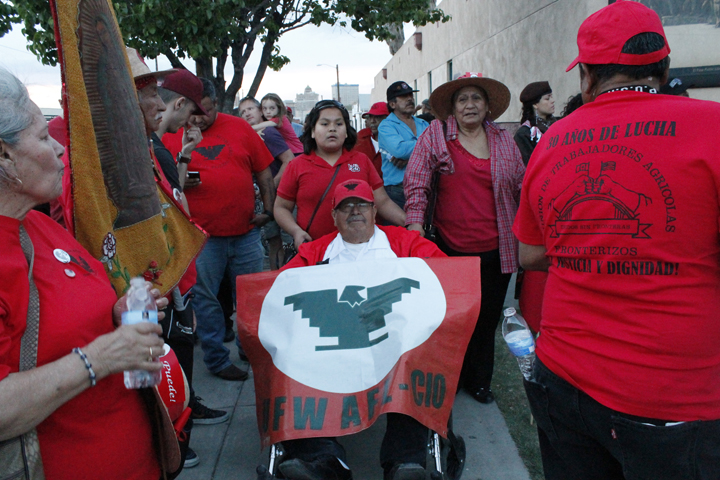 EL PASO — Shouts of “si se puede! and viva Cesar Chavez” followed the residents of Segundo Barrio — El Paso’s historic neighborhood settled by Mexican immigrants a century ago — into the streets as they were carried along in a river of red flags.

Downtown El Paso paused March 31 to watch some 300 residents of Segundo Barrio walk through the downtown area to remember the great Chicano labor leader on his birthday.

“We are here to remember Cesar Chavez, and the annual event the Centro has in Segundo Barrio brings out different people from the community. It brings out church groups, matachines and different organizations from the university,” said Clavo Martinez, treasurer at the Center and a member of El Chucotown’s Brown Berets.

People from different backgrounds and culture joined the march such as Tetyana Zhyvotovska who teaches Russian and English as a second language at the University of Texas at El Paso. “I am teaching at UTEP and a part of this community so it is important to learn the culture here,“ Zhyvotovska said.

She took her students to a Cesar Chavez exhibition a few years ago at UTEP and she said that she was surprised that lot of students knew nothing about him or his work. Martinez said the crowd gathered at the Center to celebrate the life and legacy of Cesar Chavez and the work that he did as a union organizer. Chavez was one of the founders,along with Dolores Huerta, of the United Farmworkers Union.

Martinez said the Farmworkers Center is the only organization of its kind in the region serving 6,000 to 10,000 farmworkers on any given season.

“Everything that we eat and do during our daily lives always starts with a farmworker,” Martinez said.

“We feel that it is the only way to show the community, the city, the region, how important the farmworker struggle is,” Martinez said.

With farm labor being the lowest paid, taking place in the harshest conditions and longest hours, it is important to show farmworkers that the Center is there to help them and to make sure they are treated equally and fairly, Martinez said. Dr. Selfa Chew, associate professor of history at UTEP, said that Cesar Chavez Day is important because he represented the Mexican-American farmworkers who are a key element in the U.S. consumer economy.

Citing herself as an example of someone who owes a lot to the work of Cesar Chavez, Dolores Huerta and other Mexican American leaders, Chew said that without their struggle she wouldn’t be the person she is today.

The march honors the workers of Mexican descent, migrant workers, immigrant workers and all the suffering and hardship that they still face today, Chew said.