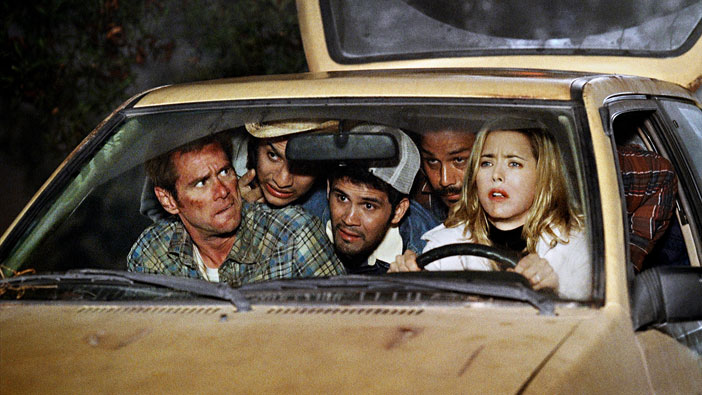 Fun with Dick and Jane

He lives in the desert or in a dangerous place, wears a big hat, sports a mustache, and sleeps under a cactus bush. She cleans fancy houses, takes care of Anglo children and lives in a drug-infested neighborhood.

These are just some of the portrayals of Mexicans and Mexico in several popular Hollywood movies. Other stereotypes of our neighbors south of the border: vicious criminals, heartless drug dealers, poor, uneducated undocumented immigrants.

But that’s only one side of the story. And U.S. movies rarely portray the other side: Mexico’s charm, physical beauty and variety, indigenous and Spanish culture, and Colonial history. As a Mexican-American woman living on the U.S.-Mexico border, I’m tired of seeing the country of my birth portrayed in movies through damaging stereotypes that only reflect the attention-grabbing social problems reported on by major media.

While there’s nothing wrong with working as a maid or a gardener, it is wrong to stereotype an entire people as poorly educated minimum wage service workers. And drug dealers and vicious criminals exist all over the world, not just in Mexico.

In the meantime, here are eight movies that I find especially offensive to Mexicans and Mexican Americans.

Although this movie tries to send the message that the U.S. would be unable to function without Mexican immigrants, it also relegates their contribution to U.S. society as willing to do the “dirty” work that U.S. citizens aren’t willing to do.

This film is about a day in which all Mexicans disappear from the United States, and Americans start to worry because there is no one washing the dishes, cutting the grass, or building their houses. Missing from this scenario are the thousands of successful Mexican-American doctors, lawyers, actors, professors, journalists. As a future news media professional, I am one of them.

This movie’s story line is about a young kidnapped daughter of a Mexican businessman and his U.S. wife. It’s full of intense, edge-of-your-seat action, but also shows the worst aspects of Mexico — violence, kidnapping, corruption. The father (Marc Anthony) is portrayed as a drug dealer who is willing to sacrifice his daughter’s life and safety to advance his nefarious business deals. Her rescuer is a U.S. former police officer, played by Denzel Washington.

Yes, Mexico does suffer from a high rate of kidnappings, but other countries around the world also have similar problems.

This movie does a “good” job of stereotyping an entire country as an ugly and dangerous place for U.S. citizens.

The “Gringo” (Mel Gibson) is captured by corrupt Mexican police and sent to a Mexican prison in Tijuana for stealing money from the head of the San Diego mafia–money that Mexican cops then steal from the hero. This film shows an exaggerated social decadence and inhuman conditions that exist in Mexican prisons.

The “bad” people in this movie are the Mexican police and prison inmates. The hero is a U.S. citizen. The prison is near El Pueblito, a desert-like, impoverished and dangerous town.

“Nacho Libre” is the first film I’ve seen that is not about a Mexican gangster or undocumented immigrant and carries a positive message because the hero is a boxer who tries to raise money to help orphans in Mexico. However, the hero, Nacho Libre, is played by Jack Black, a U.S. citizen. Why not a Mexican actor? Why is it set in an ugly desert? Why not Cancun or Mexico City?

An undocumented immigrant housekeeper (Adriana Barraza) takes two U.S. children to her son’s wedding in Mexico. She ends up losing the children, under arrest and deported from the U.S. Before being deported, she finds out that the children have been rescued by Border Patrol officers. Lots of stereotypes here: A maid for a U.S. family who is undocumented, silly and negligent.

Flor (Paz Vega) is a poor Mexican single mother who works as a housekeeper for a rich U.S. family. She speaks very little English, so she has problems communicating with her bosses.

This film is another example of a Mexican woman who is presented as silly, ignorant and as a maid in the house of an Anglo family.

Mexican actress Adriana Barraza plays a maid in the home of a white, middle class woman (Jennifer Aniston) who suffers from debilitating back pain from an accident in which her son died. Barraza, who portrays an immigrant from Mexico, not only cares for her difficult boss but also has to cope with her craziness and depression. In the movie, Barraza accompanies Aniston to Tijuana to buy drugs illegally. Once again, we are presented with the familiar trope: a Mexican maid who works hard for low pay and Mexico as the go-to-place for purchasing illegal drugs.

After Dick (Jim Carrey) gets a promotion at work he convinces his wife (Téa Leoni) to quit hers. Then he loses his job. Desperate, he tries day labor with the relatives of his Mexican nanny. Then Dick and Jane start stealing stores to pay bills. In one scene when Dick joins a group of Mexicans trying to land a day job, one of them steals his wallet.