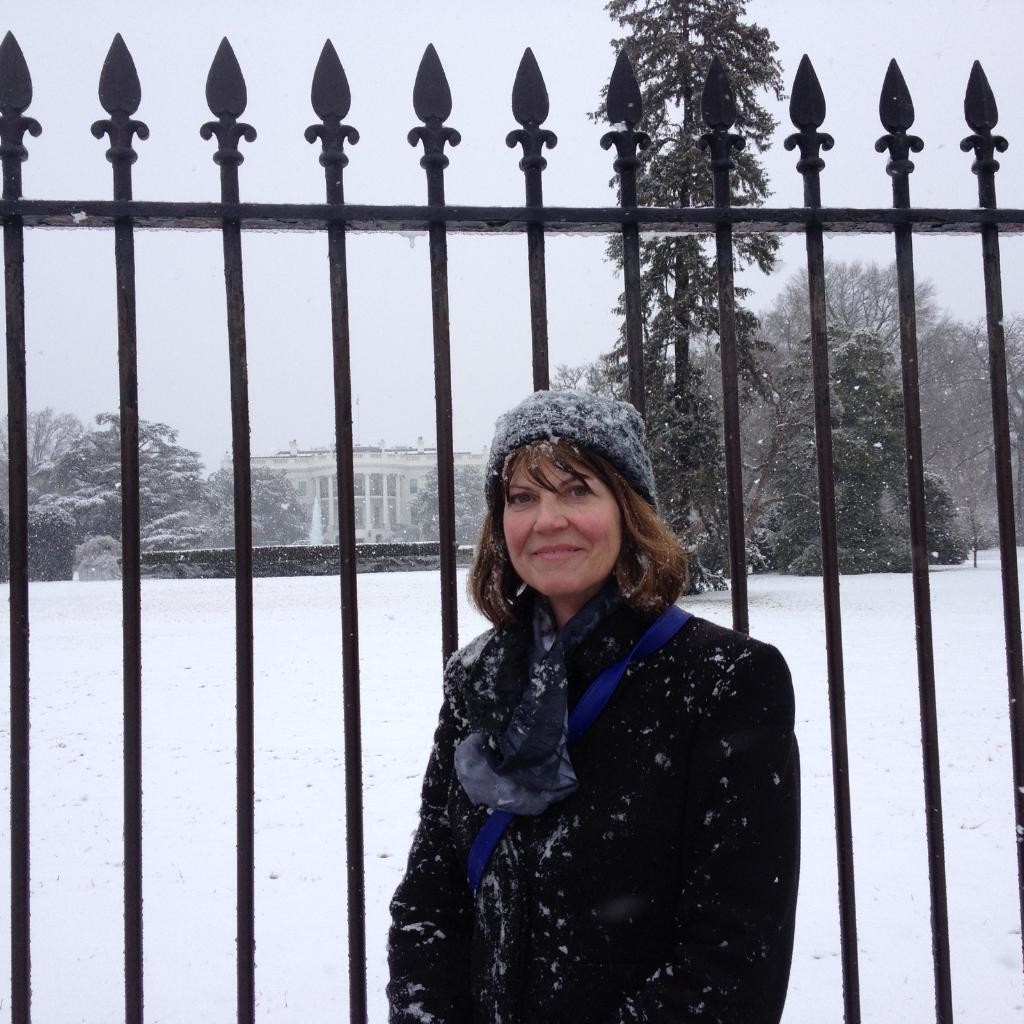 After a March 5 meeting was canceled because of a snow storm, Michele Beckley, an El Paso, Texas, businesswoman, walked from her hotel to the White House and had her picture taken with the South Lawn in the background. Photo courtesy of Michele Beckley.

WASHINGTON – An El Paso businesswoman traveled to the capital hoping to make new business deals. Instead,  she found herself in the midst of heavy snowfall that shut the government and most everything else.

Michele Beckley arrived in Washington on March 5 expecting to attend an event at the White House hosted by Business Forward to discuss U.S. international trade. Mother nature had other plans.

Beckley found out just after her plane landed that the event had been postponed to March 18. She was not able to make a return trip for it.

She is the vice president of the Merlot Corp., a natural, grape-seed, skin-care line, which was created and founded by Beckley’s husband, Wayne Beckley. He got the idea after watching a TV program about how the French habit of drinking red wine had had diminished aging and heart disease.

“My husband was a chemistry teacher at Austin High School,” Beckley said. “With his background of chemistry, he started mixing things up and applied the different lotions to apples since they oxidize. He figured if red wine could be used for their antioxidant agents, then surely grapes could be too. When he finally found the combination that worked best, he branded the product.”

Beckley wanted to talk business with Deputy U.S. Trade Representative Robert Holleyman, who was scheduled to attend the event. She was also hoping to speak with Rep. Beto O’Rourke, D-Texas.

“We have a trade imbalance with China,” Beckley said. “We’re currently looking into importing our product into Shanghai, but there are a lot of measures and protocols that need to be met. I would have liked to have received more information on that.”

Instead, Beckley ventured out to a few favorite tourist attractions.

“I went to the Smithsonian’s Museum of American History,” Beckley said. “I specifically loved the display of dresses worn by the many first ladies of the country.”

A former kindergarten teacher, Beckley has been to D.C. a few times before.

“Luckily, I have an idea of where things are and what to do. I walked the Mall and visited the White House,” she said.

She also conducted some business promotion.

“I met with the category manager and beauty adviser of a local Walgreens and they told me that Merlot sells well in their store,” Beckley said. “They carry four of our products and didn’t have much left on the shelf.”

Jose Soto is a Spring 2015 reporter for the SHFWire from the University of Texas, El Paso.