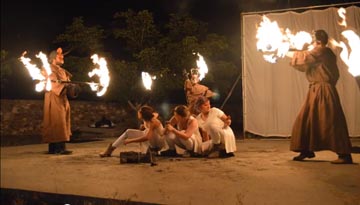 Odd Lab, a flow arts entertainment troupe, found a new level of expression while preparing for its performance at El Paso’s Chalk the Block festival in October.

“This pushes us to a theatrical production standard that we’ve never had the incentive to really accomplish,” said Georgina Armendariz-Ramirez, director and coordinator of the group.

Find out more about Odd Lab at their website here.

Members of Odd Lab, who practice on Rim Road overlooking the city, spent up to 12 hours a day perfecting their skills and planning for the 7th annual Chalk the Block, which drew more than 30,000 people to Downtown El Paso October 10-12. The group unveiled a 20 minute Shadow Box Theatre show as well as a 40 minute fire show that were developed especially for the festival.

The result was a spectacle of fire and dance that wowed the crowd. Watch the video by Borderzine reporter Angela Saavedra to see highlights from their practice and the show.