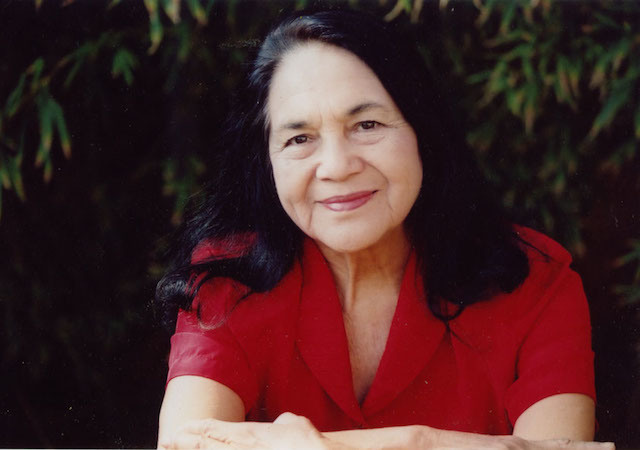 Many Latinos have criticized President Obama’s decision to delay action on immigration, but not civil rights activist Dolores Huerta. She said any action by the president on immigration could result in Republicans gaining control of the Senate, therefore, enabling them to pass tough immigration bills already approved in the GOP-controlled House. Photo by Angela Torres, courtesy VOXXI.com

Labor leader and civil rights activist Dolores Huerta is standing by President Barack Obama on his decision to delay executive action on immigration and is asking the immigrant community to have patience.

“We have to look at the big picture and don’t get caught up in saying we want it now,” she said, referring to action on immigration. “We’ve been waiting—we are a community that can wait. And we have to have faith in our president, because the Republicans have shown their hand. We know what they want to do.” Many Latinos have criticized President Obama’s decision to delay action on immigration, but not civil rights activist Dolores Huerta. She said any action by the president on immigration could result in Republicans gaining control of the Senate, therefore, enabling them to pass tough immigration bills already approved in the GOP-controlled House. Photo by Angela Torres, courtesy VOXXI.com

Many Latinos have been critical of Obama’s move to delay executive action to reform portions of the nation’s immigration system until after the November elections, but not Huerta. She said in an interview with VOXXI on Tuesday that an immigration announcement by the president before the midterm elections could possibly cripple Democratic efforts to maintain control of the Senate.

Currently, Democrats hold 53 seats in the Senate and Republicans hold 45. There are also two independents who caucus with the Democrats. According to The New York Times, Republicans have a 54 percent chance of gaining a majority in the Senate.

Huerta noted that Republicans in the House of Representatives have approved a number of bills that would hurt Latinos and immigrants. One of the bills she pointed to seeks to defund and ultimately get rid of Obama’s deferred action program that protects undocumented youth from deportation and allows them to work.

She added that House Republicans have also approved bills that would deny millions of women reproductive health care coverage—an issue she cares about as a champion of women’s rights.

“Right now, none of those laws have been able to pass in the Senate because the Democrats have control of the Senate,” Huerta said. “If in this next election we lose the Senate, all of those bad bills that they passed against immigrants will become law.”

The longtime immigration reform advocate also expressed concern about Latinos who threaten to not vote in the upcoming elections as a way to protest Obama’s delay on immigration. She said that sitting out the elections could not only affect the outcomes of congressional races that include Latino candidates, but also other local races like city council, board of supervisors and school board.

“We have to be careful. We have to look at the big picture,” Huerta insisted.

This story, by Griselda Nevarez, was originally published in Borderzine partner VOXXI.