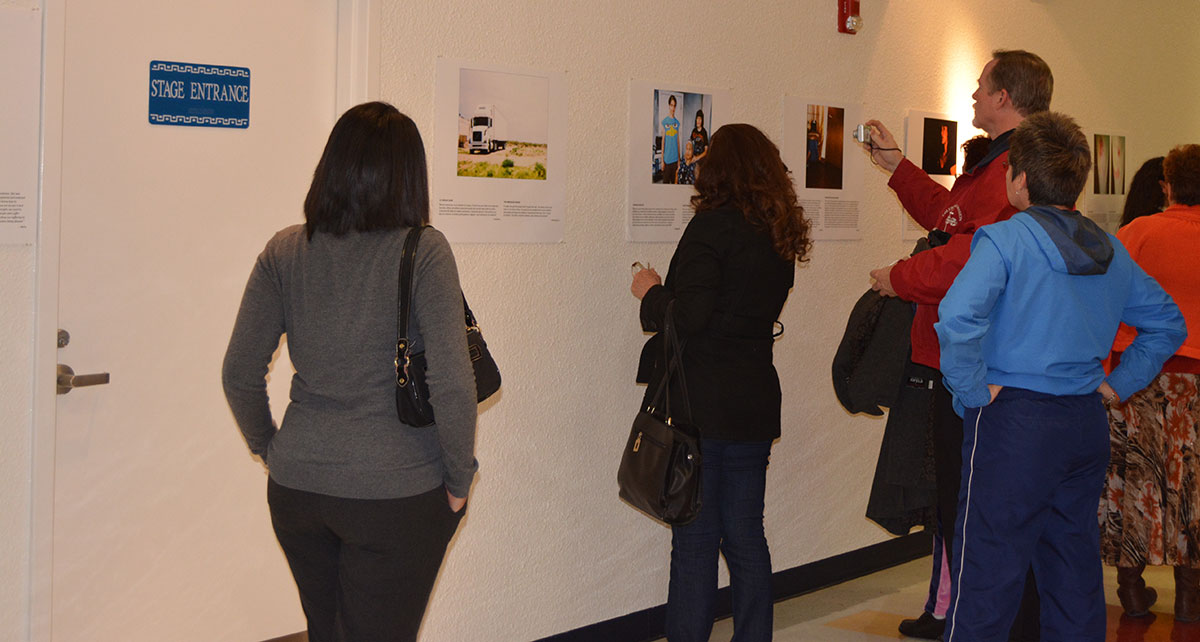 EL PASO – Berenice, six months pregnant, remembers how she was trying to relax on her bed after a long day at work when she heard her husband enter the room. Rolling on her side as he began to hit her, she shielded her body so his blows would not hit her swollen stomach. Then he demanded that she get up and clean the house and “act as a maid” even though she already has a full time job. Soon after this incident several years ago, she became the sole provider for her family, which included her husband, his mother and other extended family.

Today, looking smart in a green pea coat, it is hard to imagine that Berenice is a survivor of domestic abuse.
She says her daughter gave her the impetus to step out of her dangerous domestic abuse cycle. “I didn’t want my daughter to learn to allow all this violence and emotional abuse… That was one of the things that gave me the strength to keep going.”

Berenice is one of 22 migrant women whose experiences are documented through Voices and Images of Migrant Women. The exhibit opened at the end of January at Centro De Salud Familiar La Fe’s Cultural Center in El Paso’s Segundo Barrio neighborhood.

Women, especially if they are undocumented and being abused by a partner, are an even more isolated group than other victims of intimate partner violence, according to social workers. Using their immigration status as a threat, these women are manipulated into staying in potentially deadly situations.

According to Dr. Eva M. Moya, assistant professor at the department of social work at the University of Texas at El Paso, domestic abuse affects 12 million people in the U.S. each year. Although we do not personally see all 12 million faces of domestic violence, she said the Voices and Images of Migrant Women photo voice project helps the public become more aware of the victims. Berenice uses flowers to represent her experience as a victim of domestic violence. (Christy Ruby/Borderzine.com)

Moya said the intent of the photo voice project was for victims to capture their story with disposable cameras and use the photographs to express the manifestations of partner violence in their lives. Another purpose was to focus on the impact of intimate partner violence on sexual reproductive health.

On a broader level, the project is intended to spark public policy change toward intimate partner violence, specifically violence against migrant women.

Photo voice is a favorite medium of Moya who was one of the coordinators of the project.

Norma Martinez, another photo voice participant, spoke in Spanish recently about the effects of abuse during an interview at the exhibit opening at La Fe. Voices and Images of Migrant Women has been on display nationally and internationally since 2012.

Martinez said she kicked her ex-husband out of the house after a verbal fight. After divorcing him, she still wanted to be with him. She explained that couples often become codependent in a violent relationship. “I wanted him to return, but I wanted him to return a changed man and be the man I first fell in love with, the father of my children,” she said.
At the entrance to the exhibit, graphic representations of the cycle of abuse are displayed in Spanish and English. The exhibit continues along the walls of the short hall showing seemingly innocent photos of flowers, women, and street signs. Upon closer examination, they reveal subliminal symbolism and hidden messages of abuse.

One of these pictures is actually a collection of three photos of a pink flower on a bed of rocks. Berenice, the photographer, explains the different stages of abuse through the photos — in the first picture the flower is under glass and in the third it is uncovered and bathed in sunlight. She says the photos describe her feelings while in a violent situation, breaking away from the cycle, and finally thriving in a healthy environment.

Although Martha Villasenor’s photographs were not chosen for the display, she described one of a flower that was in the process of dying. “I love flowers, gardening is my passion and I noticed that the flower only has a certain amount of time and I didn’t want that to happen to me,” said Vallasenor.

She described her abusive relationship with her former partner as only providing her with water for sustenance and letting her wilt on the vine.

A theme reflected throughout the exhibit is the hidden suffering of victims. Emotional scarring from abuse may not be visible, several speakers said, but that does not make it any less damaging.

“You are obligated to do something about it if you value your life because this type of abuse is going to end in death or you being marred for your entire life,” said Berenice. “The benefit (of getting help) will not only positively affect your life, it will help your entire family.”

An important aspect of the exhibit is its presentation of domestic violence as a motivator for action. At the opening presentation, Estele Reyes, the media relations coordinator for La Fe, stressed that the exhibit is meant to inspire action, whether this action is women breaking the chains of abuse or lawmakers making policy changes. Moya said the exhibit was chosen for the La Fe location because the center is a refuge for women and men who are at a greater risk of domestic violence.

Moya said that all 22 of the women who participated in the photo voice experiment are currently in healthy relationships free of abuse. She also shared that she is collaborating with the nursing school at UTEP and formulating recommendations for change to the Housing Authority of El Paso for women living in a domestic violence situation.

This free exhibit will be on display through the month of February at La Fe Culture and Technology Center located at 721 S. Ochoa (Rear Building) El Paso, Tx 79901. After this month, it is not clear where the exhibit will head, but Moya is looking forward to having it displayed in school districts, public libraries, and colleges.