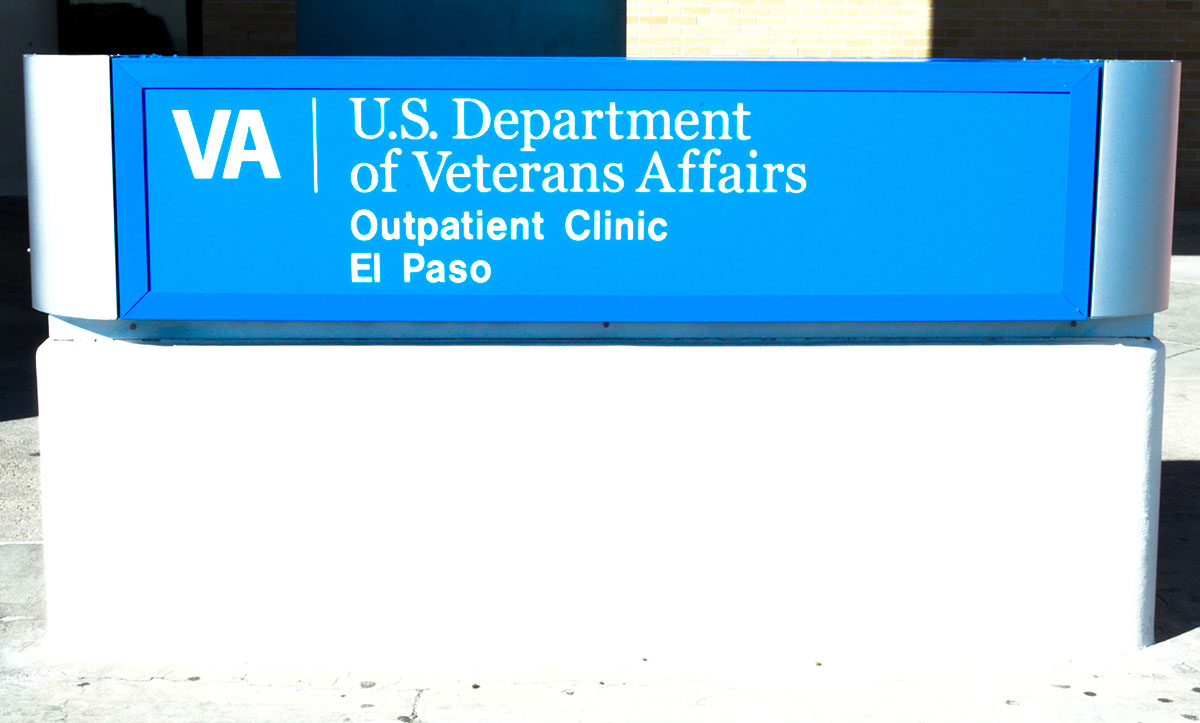 EL PASO — As he sits at a faded-black dining room table, a man in his mid-twenties stares at the front door, his reflection visible from the dirty tabletop where a brown paper bag holding his lunch rests. His eyes dart focusing from one end of the room to the other as if he’s never been there before, sitting upright, inspecting the room. In general, the rate of suicide among male Veterans Administration clients connected to care with the El Paso Veteran Affairs Health Care System has remained stable, according to Dr. Donna Nesbit-Veltri. (Camilo Jimenez/Borderzine.com)

He specifically chose the seat with the best view of the front door, which he never stops looking at for more than a moment, because he says he is hardwired that way. He seems uneasy even though he has been here hundreds, if not, thousands of times, only four doors down from his childhood home.

Esteban, 26, served four years in the United States Marine Corps and did two tours in Iraq. After his discharge, he returned home, started college and began to live his life again as a civilian. But life did not go as well as he expected.

“If a vet is not careful, he can start to feel useless and without a purpose,” he said. “It’s a fun thing,” he said, “being there with your buddies, having a mission to do. Then when you get out its like ‘What do I do now?’”

What Esteban described is not uncommon for veterans. According to the research and development for the armed services website, rand.org, about 18.5 per cent of all returning service members meet the criteria for either depression or PTSD (Post Traumatic Stress Disorder). That depression can then lead to thoughts or attempts of suicide.

“Some people feel like, ‘I don’t have a purpose in life so I’m just gonna kill myself.’ This buddy of mine calls me on Veterans Day and tells me he loves me,” adds Esteban, “I was like OK man I love you too! Then he tells me to tell Hector that he loves him too and that’s when I realized this is a goodbye call! So, I rushed over there and I saw his gun within arms reach and asked him if he was planning on eating a bullet?”

In general, the rate of suicide among male Veterans Administration clients connected to care with the El Paso Veteran Affairs Health Care System has remained stable, according to Dr. Donna Nesbit-Veltri, clinical psychiatrist and suicide prevention coordinator at the facility. However among veterans ages 18 to 25 it has increased.

The most troubling statistic though, is that nationally, approximately 22 veterans commit suicide every day, according to Dr. Janet Kemp, the director for the VA’s national suicide prevention program and the 2012 Suicide Data report published by the Department of Veteran Affairs. Also, the rates for male vets has increased in the age group of 18 to ­25.

The report said that suicides among recently discharged young veterans were three times higher than for active-duty soldiers. According to the report, the annual suicide rate in 2011 for young veterans was 80 for every 100,000 persons, up from 46 out of 100,000 in 2009. Suicide rates among Army soldiers peaked in 2012 with 185.

Fortunately, the suicide rate for older veterans has actually decreased and only five of the daily 22 are receiving VA services. What this means is that a veteran with a mental health condition is less likely to commit suicide if he/she is has made a connection with the VA.

There is a national hotline that veterans can call 24 hours a day, seven days a week, 365 days a year, if they need to talk to someone. The Veteran Crisis Line is staffed by VA responders who can assist veterans going through a hard time. After a vet calls the hotline, a local suicide prevention coordinator begins to assist the veteran.

One of the speciality mental health services — the MTTP (Military Trauma Treatment Program) — consists of clinicians that specialize in treatment of PTSD and the adjustment issues of people coming out of conflict.

There is also a peer support group that consists of five veterans who are not clinically trained but can relate to the vets because they know exactly what they’ve been through and what they’re feeling. Each one deals with a different aspect such as substance abuse or younger veterans.

Despite all of the help the VA offers, there is still a stigma associated with reaching out for help. According to Dr. Nesbit-Veltri, “veterans come into the VA for help with their physical injuries and neglect their psychological wounds.”

This is especially true for younger veterans, and the idea that it’s not OK to seek out help for PTSD or depression. They also might feel that society might judge them more than say a veteran with an amputated limb, because they feel that there is more sympathy toward physically disabled vets.

The website rand.org also cites that one of the main reasons some vets do not seek care is the fear that peers would lose confidence in them if they found out about their condition.

Esteban, the ex-Marine, said that the idea that it’s not “macho” to seek help exists and that certain veterans feel as if they are not acting like “real” men if they admit something is wrong.

He also said that he contacted the friend who called him on Veterans Day to offer some help and to listen if he ever needs to talk but instead his friend threatened to shoot him if he ever tried to contact him again.

“I sometimes pass by his house to see if his truck is there and it is, but I don’t want to go knock on the door because ‘don’t come to my house or I’ll shoot you’ is a pretty straight forward message,” said Esteban. “I know there are programs out there but, what’s that old saying? You can lead a horse to water but you can’t make him drink.”

Camilo is a multimedia journalism student at UTEP.