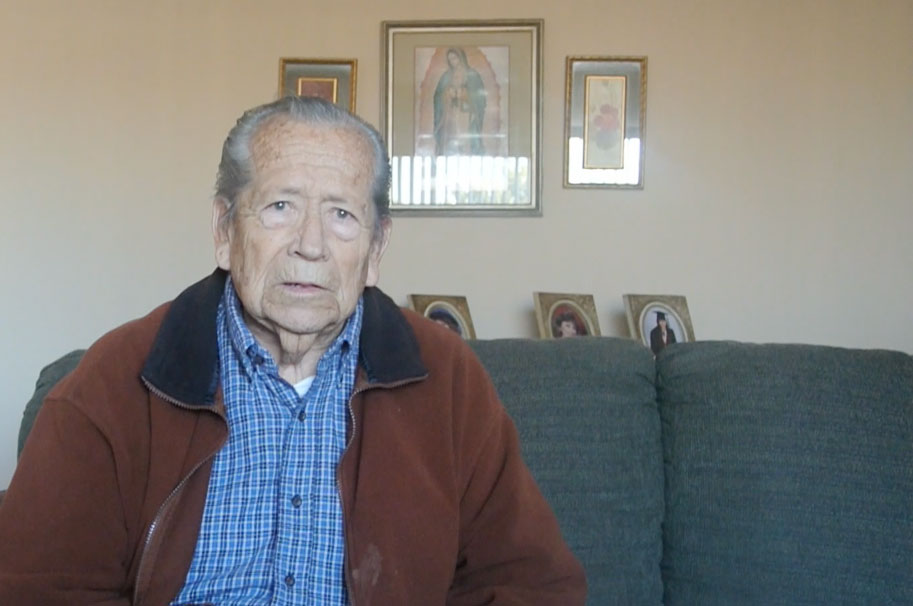 Juan Garcia Aleman, 87, said that he passed his U.S. citizenship exam 10 years ago only after he was allowed to take the test in Spanish because he was over the age of 50 and had lived in the U.S. over 20 years. (Velia Quiroz/Borderzine.com) Juan Garcia Aleman, 87, said that he passed his U.S. citizenship exam 10 years ago only after he was allowed to take the test in Spanish because he was over the age of 50 and had lived in the U.S. over 20 years. (Velia Quiroz/Borderzine.com)

EL PASO — When Juan García Aleman, an 87-year-old retired shoemaker who worked for the boot-making Tony Lama Company for 20 years moved here from Juarez in the 1950’s he didn’t need to speak or read English in the workplace.

Jesus Saucedo, a 29-year-old who was born in California but went to Mexico with his parents at age three, now lives here and struggles as a community college student with limited knowledge of English. He says he has difficulty communicating effectively at his fast-food job and is hesitant to pursue a leadership position.

Their personal stories, different in many ways, are connected because of the language barriers they faced as residents of a border city that is predominately Hispanic and bilingual. For example, U.S. Census statistics from 2010 show that 75 percent of El Pasoans speak Spanish at home, and only 24 percent of the city’s 700,000 resident are monolingual speakers of English.

Dr. Cheryl Howard, an anthropology professor who formerly taught at UTEP, said,  “Since the population of El Paso is more than 80 percent Hispanic, I am not at all surprised that so few people speak English only.  Even Anglos in El Paso need a basic knowledge of Spanish to work, to feel at home here, to interact with their friends and neighbors.”

As immigration from Mexico and other countries has grown over the last three or more decades, area residents’ use of English and Spanish has become more common at home and in the workplace. El Paso’s proximity to Ciudad Juarez has contributed to increased bilingualism as residents of both sides maintain family and work ties. For example, many El Pasoans have relatives who live in Juarez or other parts of Mexico and many Juarenses also have family on the U.S. side and routinely cross the border bridges to work and shop in El Paso.

Aleman, who was born in Fresnillo, Zacatecas, moved with his father to work in Juarez in 1945. After he met and married Consuelo, who was a U.S. citizen living in Juarez at the time, the couple moved to El Paso in the 1950’s and started a family.

Aleman’s wife and five children are bilingual, but he never learned English. Aleman said he did pass his U.S. citizenship exam 10 years ago only after he was allowed to take the test in Spanish because he was over the age of 50 and had lived in the U.S. over 20 years.

Aleman recalls having to study the U.S. Constitution and other details of government in the exam book in order pass the one-hour exam.

Although he still remembers that the first President of the United States was George Washington and why Americans celebrate the Fourth of July, he says learning English has been a life-long challenge.

“It’s not spelled how it’s pronounced, like Spanish,” he said recently from his Lower Valley home. He admits he’s at fault for not taking the exam earlier in life. “It was procrastination on my part because free English classes were offered to us,” he said.  “All we had to do was go and study.” Saucedo is currently focused on learning English in his classes at El Paso Community College. He returned to El Paso five years ago and has been frustrated by attempts to communicate at his fast-food jobs. A former crewmember at Burger King and manager at Taco-H, he currently works at Wendy’s as a team leader.

“It’s been easier here than if I lived somewhere else where Spanish is not common,” said Saucedo who hopes to be a chef one day. “However, when it comes to work it can be tough. Say, for example, I was offered a job right now as manager I would not feel prepared.”

Melissa Lopez, executive director of the Diocesan Migrant and Refugee Center, said her organization provides legal services to the undocumented and helps legal residents who want to apply for citizenship. The center offers both English and citizenship classes.

“The most important thing is for people not to be scared of the English part (of the citizenship exam) because people get scared and don’t try. Even if your English isn’t perfect keep working on it,” she said. She also feels El Paso schools should stress bilingual ability.

“I believe there is no excuse for not making every high school graduate from this region fluent in both languages, with a working knowledge of a third,” added Lopez. “Instead, we appear to denigrate Spanish in our schools, and treat children who are English Language Learners (ELL) or whatever buzzwords are used these days as having some kind of mental defect rather than an asset.’’

Children born outside of the U.S. who have U.S.-citizen parents can also apply for citizenship through a more complicated process, according to Lopez.

The Diocesan Refugee Migrant Center first screens cases to see if an immigrant is eligible for services according to immigration status and income based.

If an immigrant qualifies for financial assistance the center doesn’t change a fee for services but he or she is responsible for paying immigration filing fees. The cost to file an application is $680.

The U.S. Citizenship and Immigration Services website provides tools to help immigrants who want to become naturalized. Educational products are available on the site as well as lesson plans and activities, training seminars and additional information. A civics and citizenship toolkit is available to organizations that wish to provide naturalization help to immigrants.

According to the website, citizenship comes with important responsibilities such as voting, serving on a jury, and the ability to travel with a U.S. passport.

Other benefits include the opportunity to apply for a federal job or government benefits, citizenship for children under 18 years of age, and being eligible to run for elected office.

Students who become citizens also are eligible to receive financial aid, and apply for grants and scholarships.