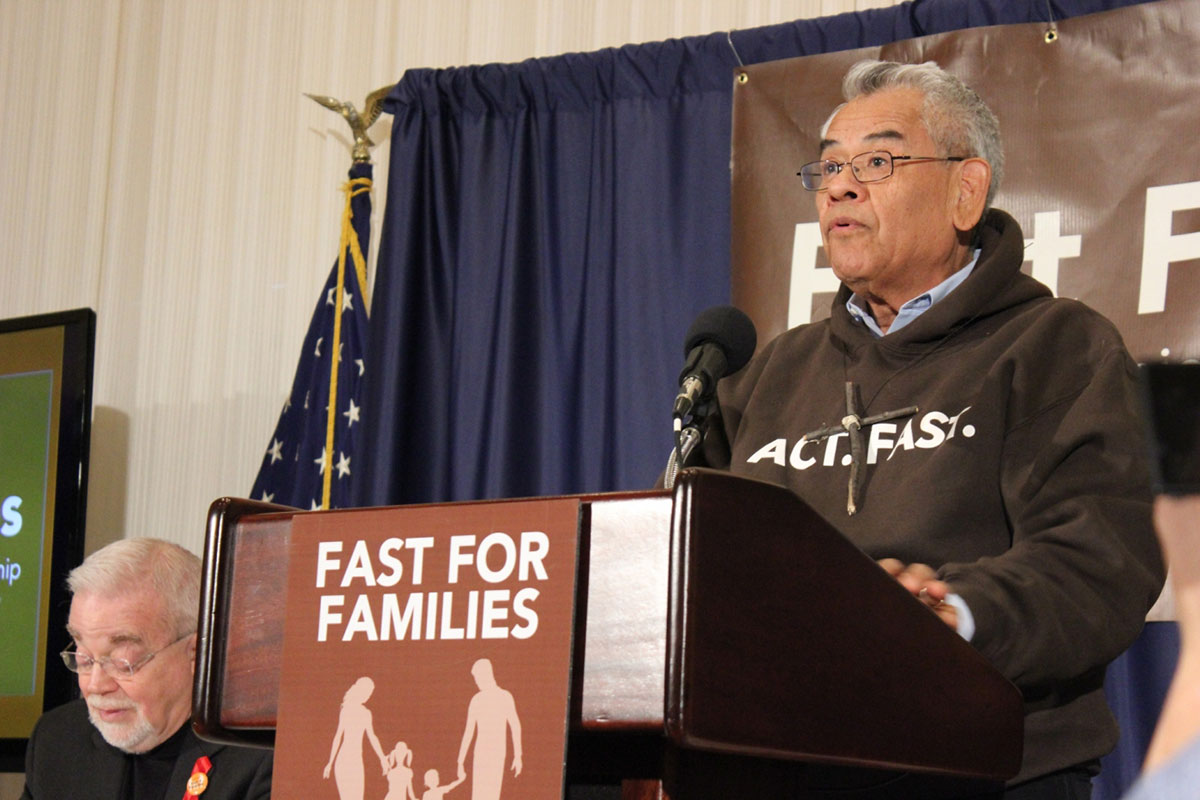 Eliseo Medina, international secretary-treasurer for the Service Employees International Union, says Fast for Families will visit more than 100 key congressional districts where the group will invite people to join him and others in the fast. (Alejandro Alba/SHFWire) Eliseo Medina, international secretary-treasurer for the Service Employees International Union, says Fast for Families will visit more than 100 key congressional districts where the group will invite people to join him and others in the fast. (Alejandro Alba/SHFWire)

WASHINGTON – Four activists for immigration reform are taking their cause on the road. They will board a bus Tuesday and urge people in 100 communities around the country to fast with them until Congress passes immigration reform.

“We are going to be asking the American people to join us in fasting,” Eliseo Medina, international secretary-treasurer for the Service Employees International Union, said. “Judging from what happened in December, I think we are going to have tens of thousands of people joining us.”

The tour will visit more than 100 congressional districts to engage members of Congress in a dialogue on immigration reform. The tour is scheduled to end April 9 in Washington.

The Rev. Jim Wallis, president and founder of Sojourners, said the campaign is for all immigrants.

“This is not just about Latino communities,” Wallis said. “It’s about all of us.”

Wallis said the movement is important and requires a group of people to change the broken political system and the broken immigration system.

“We are a wind changing group,” Wallis said. “We are a social movement changing politics.”

Barbara Williams Skinner, co-chair for the National African American Clergy Network, agreed that the movement is broad and includes all immigrants from different nationalities.

“We are a nation of immigrants,” Skinner said. “Why would we leave the best of who we are in the shadows?”

The bill, The Border Security, Economic Opportunity, and Immigration Modernization Act, H.R. 15, is similar to the Senate bill. It would make it possible for undocumented immigrants to gain legal status and eventually citizenship. It also proposes border security improvements and ways to assess how well they work. It would enact the DREAM Act to grant legal status and a path to citizenship for young people brought to the U.S. as children.

Rep. Joe Garcia, D-Fla., introduced the bill Oct. 2. It was referred to the Science, Space and Technology subcommittee on research and technology Dec. 13.

“We would like immigration reform sooner rather than later,” Medina said. “Every single day we have people dying in the border, and we have more people being deported.”

The Rev. Jennifer Butler, executive director at Faith in Public Life, said the purpose of fasting is to affect and move members of Congress.

“There were a number of Republican members of Congress, in particular, who came down and when they heard the stories of how this was impacting families they actually wept,” Butler said.

Butler said fasting was adopted to illustrate the real life stories of immigrants.

“The fasting reminds us of the suffering that families go through when they are struggling to make a new way in a foreign country,” Butler said. “It also shows our deep spiritual commitment to making this issue move forward.”

Medina and Wallis said the broken immigration system will change only if everyone participates in the change.

One thought on “Fast for Families tour of U.S. promotes immigration reform”