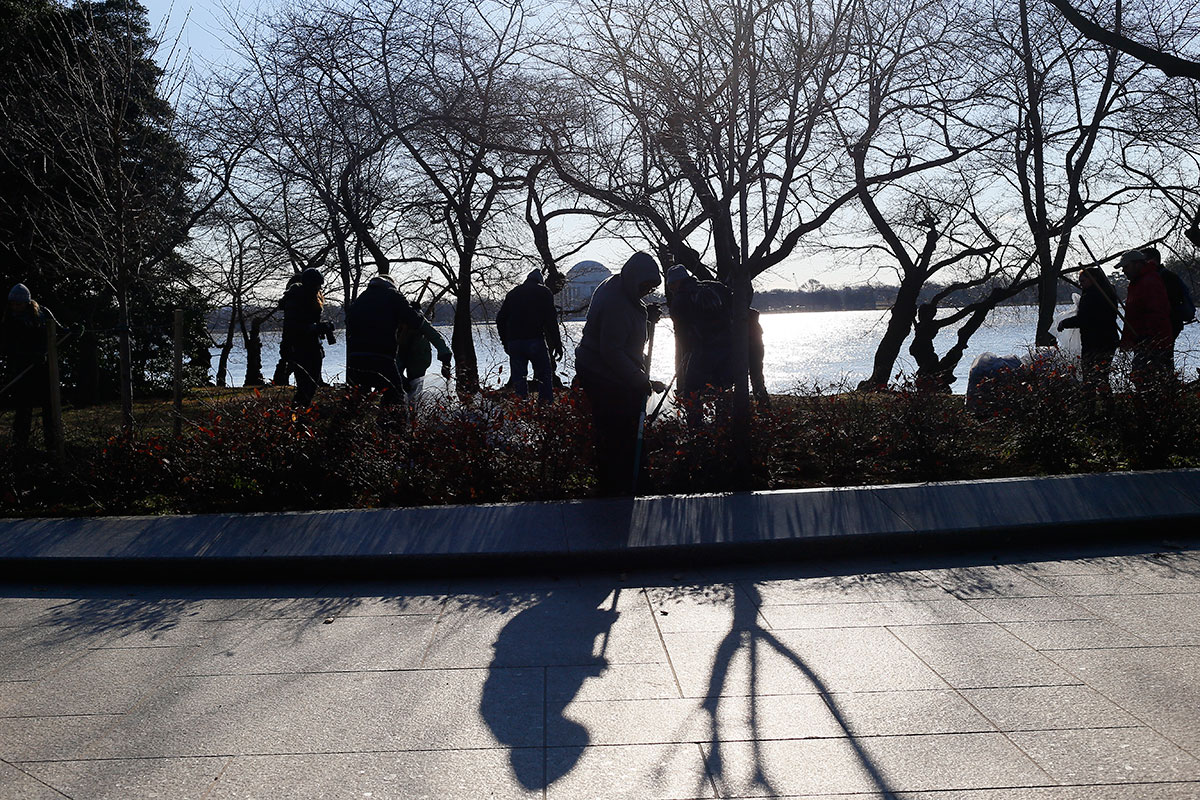 Ana McBayna and other Impact volunteers pick up debris off the Tidal Basin. (Aaron Montes/HispanicLink) Ana McBayna and other Impact volunteers pick up debris off the Tidal Basin. (Aaron Montes/HispanicLink)

Washington, D.C.- Skipping some opening tributes that quoted the profound words of Rev. Martin Luther King Jr. on his Jan. 20 birthday, some 150 black and other youths picked up shovels and trash bags to take direct action.

Last year, then-Secretary Ken Salazar and department specialist Celinda Pena initiated the effort. Back again this year, Peña said, “Martin Luther King Jr. represents everyone in his message which is duty and service. We are here honoring that message by doing work that someone else would need to do.”

Impact DC special projects manager Brandon Andrews told Hispanic Link News Service that while some progress has been achieved and without it, “the civil rights, the social justice movement as we know it, probably would not have been possible.”

People of color still do not enjoy “ownership” of our national parks and public lands, he warned. “Look right across the Lincoln Memorial where the March on Washington for Jobs and Freedom was held,” he said. “Taking that message to communities of color around the nation will inspire people to take ownership of these jewels.”

The Interior secretary said similar events around the nation would provide fresh opportunities for youth. Continuing to rake, she added that she hopes to gain one million volunteers nationwide to help in park and public land servicing.

“A lot of young people will be put into lead positions,” Jewell said. “When you work alongside others and work with your hands, it connects you better to the natural world.”

A handful of Park Rangers accompanied the volunteers to instruct them in what needed to be done. Parks coordinator James Pierce raked alongside the students. He had become a ranger through Operation Warfighter. The program helps recuperating service members into activities outside the hospital. Pierce served in the Khost Province of Afghanistan for 77 days before being wounded by a suicide bomber. “Volunteers are vital to us,” he said. “There is so much work to do, we cannot do it all without them.”

Congressional Black Caucus official Ayofemi Kirby stressed that youth must stay engaged with adults to know the struggle is not over. “The further we get from the civil rights movement, the more people will not feel connected,” she emphasized. “Martin Luther King Jr.’s dream was not unique to just one group of people.”