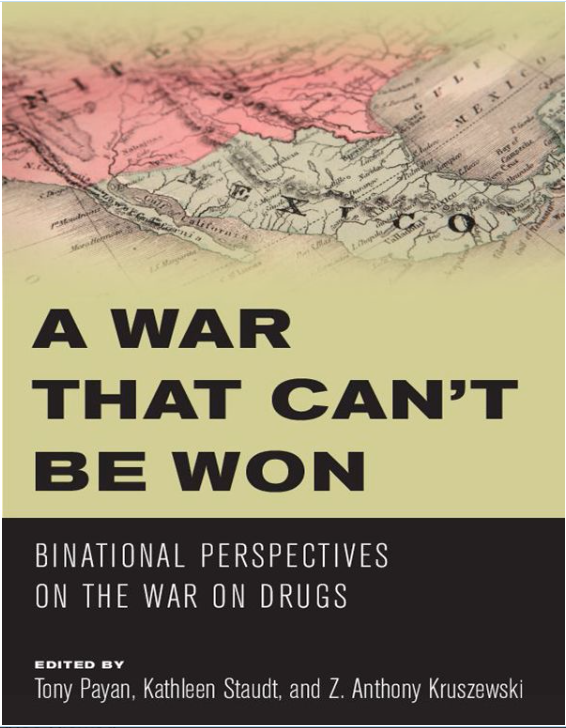 Tony Payan, Kathleen Staudt, and Anthony Kruszewski collaborated with multiple scholars in the U.S. and Mexico to compile and publish A War that Can't Be Won. Tony Payan, Kathleen Staudt, and Anthony Kruszewski collaborated with multiple scholars in the U.S. and Mexico to compile and publish A War that Can't Be Won.

EL PASO – An estimated 30,000 Mexicans murdered or missing and widespread institutional corruption are just two aspects of a never-ending war on drugs that the Mexican government continues to fight.

“The drug war is more than a justice issue, it is a social issue; a lot of words and not a lot of action,” said Jose Villalobos, assistant professor at the University of Texas at El Paso’s department of political science, speaking recently at UTEP about the Mexican drug war.

Three other political science UTEP professors – Tony Payan, Kathleen Staudt, and Anthony Kruszewski collaborated with multiple scholars in the U.S. and Mexico to compile and publish A War that Can’t Be Won: Bi-national Perspectives on the War on Drugs, which looks into the history of the drug war.

A War that Can’t Be Won includes contributions from scholars on both sides of the U.S-Mexico border, providing a unique perspective on the many dimensions of the crisis that has affected residents of both nations, particularly those who live and work in the borderlands.

Payan said that organized crime in Mexico has many layers that include drugs and killings, but it is much more than that. Even when the violence has decreased, Payan said, criminal details and statistics remain hidden underground.

“’If you don’t talk about it, it doesn’t exist,’ is the new slogan of the Mexican government,” said Payan.

Because the Mexican government is not releasing actual statistics on the numbers of citizens that have been murdered or have disappeared, the panelists agreed that Mexico is now considered one of the least transparent countries.

Payan said that the violence caused by the drug war has pushed people to change their life routines. Citizens of different cities in Mexico are afraid to leave their houses after dark, fearing their own city and feeling an overwhelming lack of security, he said.

“The book contains sections that touch social aspects of the war on drugs, the violence people experienced in Tamaulipas, Coahuila, Chihuahua and other places. I personally never fear going to Ciudad Juárez, but it was a difficult time, and we needed to look over our shoulders,” said Payan.

Even though the Mexican government’s fight in the drug war has lasted a long time, various administrations have attacked it in different ways. From 2006 to 2012, Mexican President Felipe Calderon’s strategy against the drug war relied heavily on military support. For Payan, new president Enrique Peña Nieto is not going to continue in the same manner.

During the Vicente Fox administration, the Centro de Investigacion y Seguridad Nacional (CISEN), a similar entity to the National Security Administration (NSA) in the U.S., lost important information about drug cartel key figures. According to Payan, president Fox was mentioned in one of the lost files the CISEN kept. Because of these events, the government lost control and consequently, Calderon inherited a nation of mistrust.

While Calderon focused on attacks against drug cartel activity, Peña Nieto’s administration is working to lower organized crime, not necessarily worrying about the drug aspect of it. “Most of the drugs do not stay in Mexico. It is transported to the U.S.,” said Payan.

The panelists also discussed the contradictory views the two governments have on drugs. While Mexico is fighting against the drug cartels and criminalizing all activities related to the drug trade, the U.S. is toying with drug legalization.

President Nixon declared drug abuse public enemy number one in 1971, and today more than 20 states are talking about drug legalization.

“Legalizing marijuana or regulating some drugs would not help Mexico minimize crime; it would be a pending task for the next generations of administrations” said Payan.

Kruszewski said the U.S. has fallen behind Europe in the ways it confronts social and criminal justice problems. “We need to educate our people about drugs the way we did with tobacco,” he said.

He also said that the debate would continue due to the likely continuation of the drug war. For Kruszewski, El Paso is the perfect place to start an international debate on this issue, because of the city’s border location.