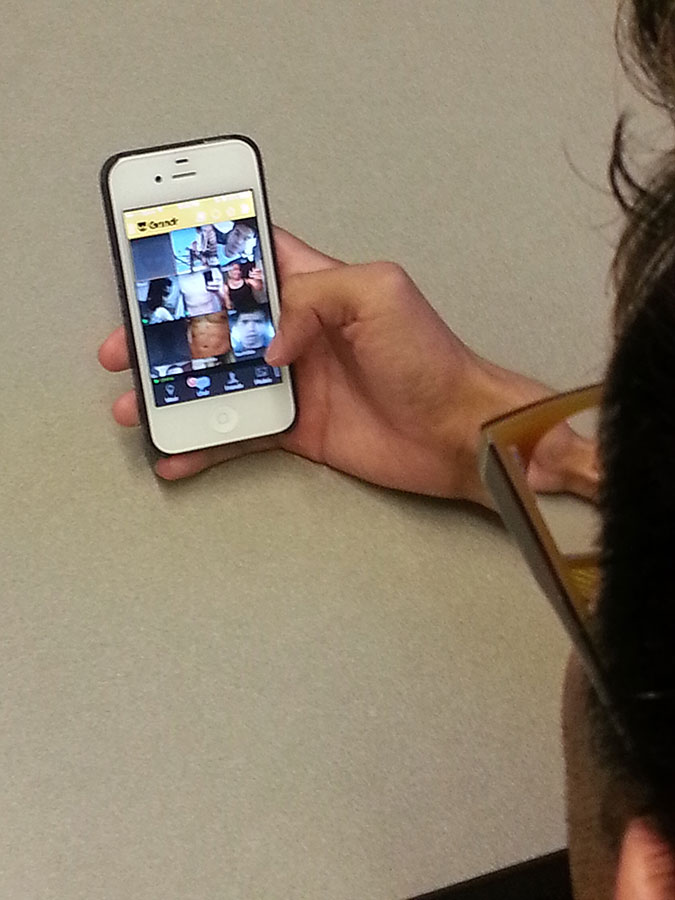 Rudy Camacho demonstrating how to use Grindr, a dating app for homosexual men. (Cristina Quinones/Borderzine.com) Rudy Camacho demonstrating how to use Grindr, a dating app for homosexual men. (Cristina Quinones/Borderzine.com)

EL PASO – Everything that was creepy and horrific about online dating is now implanted into your phone, where you can get updates on people possibly stalking you based on your location.

For some, that may still be the case, yet, with phone dating apps becoming more popular, especially within the university setting, mobile dating is slowly becoming a “normal” tool for casual dates and even for finding someone to marry.

“I actually met my fiancé on OKCupid, although that’s really embarrassing, so I tell people he rescued me from a bear in the woods,” said Rebecca Gomez, a student at El Paso Community College.

OKcupid has over 4 million users in the U.S. alone, and utilizes personality tests, personal preferences, sexual orientation, and location to create “matches.”

Users can also select what they are expecting to find/like – “find someone to marry, nothing serious, someone to date, or just hook-up.” Users receive notifications on their devices when they are messaged, or “liked” by another user.

“I was tired of the bar scene and ready for someone with goals, and I wasn’t likely gonna find that in a bar. OKCupid had an extensive list of questions you have to answer honestly to match you with someone compatible, and it worked for me. We have the same values and morals, similar backgrounds, etc.,” Gomez said.

Different apps provide different “pools” of users. Some apps are geared to finding a serious relationship, while others are mainly used for finding people with the interest of “hooking up.”

“I have friends that have a Plenty of Fish (POF) account, which I’m pretty convinced is purely for hooking up because nothing serious could really come of that. There seems to be a lot of creeps on there.” Gomez said.

Plenty of Fish is an app similar to OKCupid. It utilizes similar concepts in creating “matches”, and like OKCupid, it’s free to install. OKCupid also has the option to select expectations of what they want to get out of using the app. Demographically, Plenty of Fish has more users in younger age brackets (18-25) compared to OKCupid. “I used POF and I was skeptical about using that app because I had a bad, bad, bad, beyond bad experience with it before; but something told me to sign up again, so I did,” said Brenda Amendariz, Program Manager at Hewlett-Packard said. “I ended up meeting my girlfriend on Plenty of Fish. This was after a lot of bad luck using dating apps. It certainly taught me to be careful with people and that people are freaking crazy sometimes. It really just depends on who you are talking to.” Amendariz said. While many apps market themselves to be for creating lasting relationships, there are also apps that are very casual, but can be potentially risky at the same time. Tinder is a free app that utilizes Facebook to pull information about your age, interests, friends and photos. The app uses your GPS signal to find potential matches within a selected mile radius of your location. It allows users to either swipe right for “yes” or swipe left for “no” in selecting people they would like to get to know better.

The app sends a notification when you have received a mutual “match,” in which two users both swiped right for “yes.” Users can see if the person being presented in front of them has any mutual friends on Facebook or any similar interests selected. “It can be scary if you think about it, I mean I had it installed for maybe an hour, then I uninstalled it.  Someone can easily find you! Find where you live, where you hang out, even who your friends are,” said Joshua Rojas, 19, a student at EPCC.

Even though the app can pose a potential risk, it is widely popular, with over 2 million active daily users. “I just made a profile for fun to be honest. I actually have met a lot of people through there. I did create a profile because a couple of friends asked me to,” said Adrian Aguilar, an Engineering student at UTEP.  “It’s a fun way to meet new people, and you get to meet people you wouldn’t have met otherwise,” he said.

With the dating app world booming, new apps are being created for particular audiences. Many apps are not only geared to specific uses, but for specific sexual orientations.

Grindr is an app created specifically for homosexual men. The app is nearly identical to Tinder, except the app utilizes a “gaydar” map that shows where active online users are located, and how far they are away from you. “I met my current boyfriend on Grindr, but the thing is we met on there but re-met on it a few months later before we started dating,” said Rudy Camacho, a nursing student at UTEP. “The app is mainly for hookups. You can find someone within a few feet of you if you really wanted to. There are a lot of users, and honestly I’ve seen a lot of students here on the app,” he said.

Camacho was using the app for hookup purposes when he met his boyfriend. “We just met and started talking, and really hit it off.  It wasn’t what I initially thought was going to happen,” he said.

With new dating apps for different purposes being developed constantly, the apps are gaining in popularity. It is a new technology that seems to be the future of meeting people, to be friends with, or to date.

“It’s a way to meet people without having to have the fear of rejection; no one wants to be rejected. It’s easier to be rejected over a message, than in person,” Camacho said.

With that, users suggest taking precautions if you wish to try out a dating app. “A big pointer I would give someone that wants to give dating apps a try would be to not give out your phone number until you are ABSOLUTELY sure that they are trustworthy. Another would be not to give sensitive or personal information about yourself until you know them more,” Amendariz said.