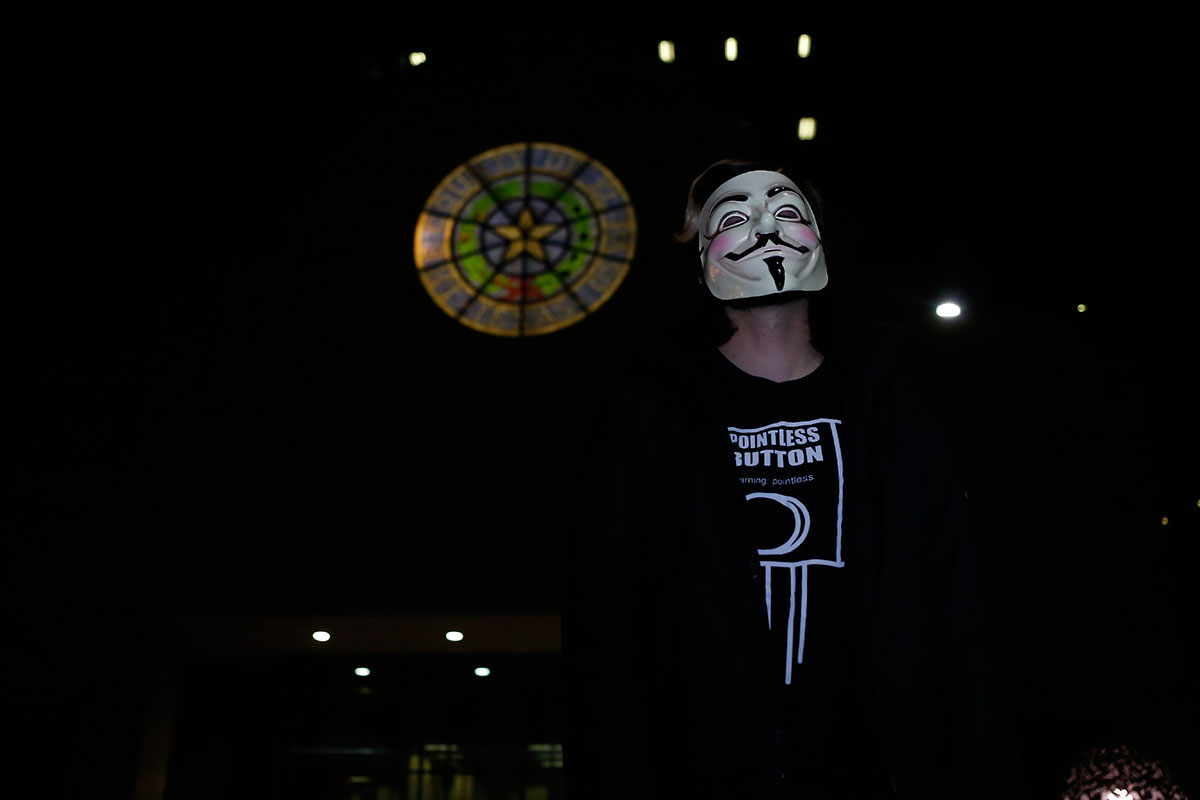 Joe Cervantes participated in the Million Mask all day in his effort to protest against a large federal government. Cervantes wore a Guy Fawkes mask in participation of the protest. (Aaron J. Montes/Borderzine.com) Joe Cervantes participated in the Million Mask all day in his effort to protest against a large federal government. Cervantes wore a Guy Fawkes mask in participation of the protest. (Aaron Montes/Borderzine.com)

EL PASO – Supporters of Anonymous occupied the sidewalk in front of the Courthouse here on Nov. 5 protesting the growth of the federal government and the disproportionate power of big corporations in the United States.

Anonymous supporters participated in the Million Mask March, which swept the globe in urban cities such as, Washington, D.C., London, Tokyo and Sydney. Protesters in major cities such as D.C. experienced arrests and police resistance.

Organizer of the international march Christine Anne Sands said that she had asked for a permit in Washington, D.C. and had been waiting to receive one to prevent negative attention that has given the Hacktivist group a shady reputation.

“I have never been arrested,” Sands said. “So I have been getting trolled really hard because other members of Anonymous suspect that I am working for the government.”

Sands explained that a contrasting group called Citizen’s Action group would take a more vigilant approach and protest where they were not granted a permit. Weeks before the protest, Sands said she received unwanted phone calls and emails that rejected the method she had adopted from other members of Anonymous. Supporters of the Million Mask March assembled in front of the El Paso county courthouse during early voting at eight a.m. (Aaron Montes/Borderzine.com)

The group in the past had radical and conservative methods to protesting against political processes. In 2011 and 2012 according to the FBI and news sources the collective hacked into private calls between the FBI and Scotland Yard, the Playstation Network, the Church of Scientology and other government websites.

Supporters in El Paso occupied the Courthouse sidewalk at 8 a.m. while voting polls were open. The group had organized itself through a Facebook event and community mainly for El Paso. The page indicated that out of 706 invitations, 71 were committed to joining the effort.

Ivan Morales, a protestor and full-time employee at Apys Color Supply, said that he hoped the international protests were not like the occupy Wall Street movement. Morales said that during that movement, the occupiers mostly complained about issues rather than trying to solve them.

Morales attended the local protest because of his disagreement with the recently instituted health care policy. Morales has an illness that requires him to constantly buy medicine for his condition. He said the medication costs approximately one thousand dollars a month.

“One thing I have been upset about is Obamacare. I was getting a lot more aid without insurance,” Morales said. “For me, it costs a lot more with insurance and it is difficult to pay so much.”

Those present at the protest expressed a variety of concerns including militarized police states, the country allowing foreign investment and concern for the National Surveillance Administration ability to search through digital accounts.

Though protesting as part of the Million Mask March, the participants in El Paso did not affiliate themselves with Anonymous. Supporter Adrian Valdez said that despite joining the event, he believes in showing a face when delivering a message.

“I am a person and I believe in showing a face,” Adrian Valdez said. “People do recognize you and what you are trying to say when you have a face.”

Inspired by the V for Vendetta movie, Jose Cervantes, 21, attended the event from morning to night. In between he had a shift at Wal-Mart, but he made his way back to prove his commitment. He spoke out against following what media and society try to tell people to follow. Cervantes said that he was a full-time student before going into the workforce. He said he left school because he felt like he was not serving himself, but others.

Cervantes said that he did not favor big business because of the unfair capabilities the industry has when it comes to big business. He said that corporations use their money to influence politics.

“I don’t like the ability for big companies to lobby and get what they want,” he said. “The rest of us can’t go and do that.”