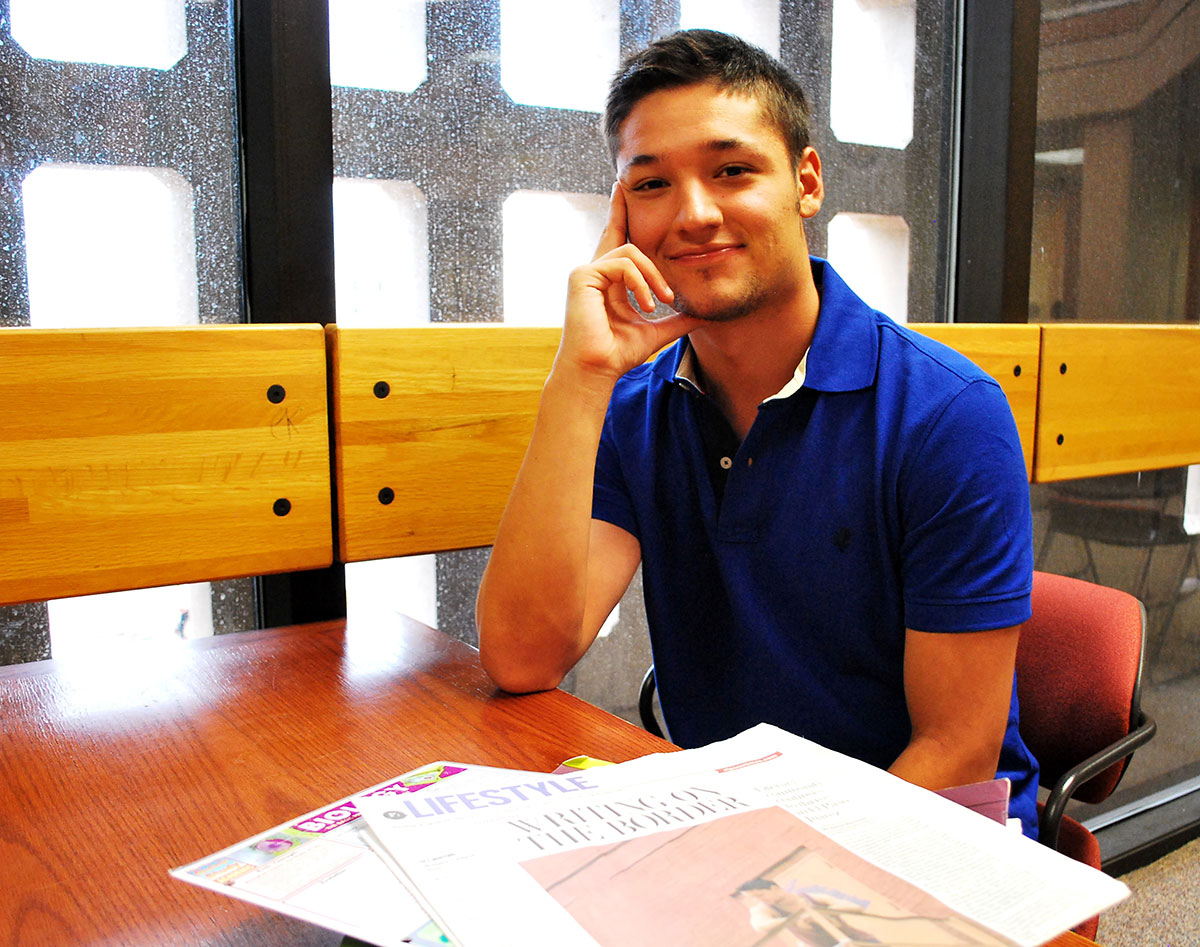 EL PASO – Ector Joel Acosta studies biochemistry and physics at the University of Texas at El Paso and plans to apply to medical school to become a dermatologist, but for now he has adopted a new identity – Borderland Man.

In this new role, Acosta, 21, is now a published Latino writer and his first book Rise of the Borderland Man is for sale online. Acosta began writing the fictional account of a young man living in the borderland along the divide between El Paso, Texas and Ciudad Juarez, Mexico a year ago. Frustrated by the long and tedious process of finding a publisher, he published the novel as an e-book this year.

“I was always keeping my mind on something – chess, writing, and art,” said Acosta who is a junior at UTEP. “I read so many books since an early age, I felt I could write one if I wanted to.  I researched writing on my own and studied literature books.”

Rise of the Borderland Man is the story of “Ector,” a young man who grows up in a divided family in El Paso and seeks a way out of poverty through adversity and by surviving street violence. In real life, a single mother raised Acosta and his two older sisters after his father went to prison on drug charges.

The story explores how “Ector” decides to stop his destructive life style that included parties, alcohol, and drugs by understanding how his actions contribute to the bigger picture of violence and suffering felt by those living across the river in Ciudad Juarez. At the end of the book, when “Ector” becomes a victim of the drug related violence, he dedicates his life to creating an atmosphere of change in the borderland.

“The message that I would like to resonate most with my readers is that even the most broken person can reach the light,” he said.

Loss of a young man’s innocence isn’t the only topic tackled in Acosta’s novel. Although Rise of the Borderland Man is pseudo-fiction it includes a number of real life events such as President Barak Obama’s speech in 2011 on immigration, the fall of the two towering Asarco smokestacks, the demolition of El Paso City Hall, and even the Sun City Music Festival. Acosta says he wants readers to understand these historic events through the eyes of El Paso’s youth, a viewpoint that is rarely presented in literature or media.

In the novel, Acosta also refers to the violence against women in Ciudad Juarez. “Women have been getting the worst end of it all and it is very twisted, unnecessary, and unjust. I dedicated my book to the women that have been victims. I wanted to show that we hadn’t forgotten about it and that we still care and want justice,” he said.

As the younger sibling of two sisters, Acosta says: “In reality I was raised by women. I am very grateful for everything my mother has done; she has always pushed us to do our best.” And despite his father’s criminal background, he says his father always told him to stay focused on school.

He admits that the process of writing the book, which is written in the first person, caused him to reflect on a dark place emotionally because he had to battle personal demons and cope with the effects of the violence in Juarez on his extended family. His literary journey, he says, helped him heal.

“At this point in my life I did not know what to do, so I just wrote. It was a path I needed to take to find myself,” he said.

Finishing the book this spring was not the end of the story, however. Stage two has been finding an editor and getting it published. As a newcomer to the writing field, he does not know many people in the publishing industry. Initially, he took the manuscript to two editors.

“We would clash because they would want to change the entire direction of my book,” said Acosta, a former high school wrestler who is nearly six feet tall.

Frustrated by their advice and the dearth of published Latino writers, Acosta decided to go with Ravenport Publishing whose primary products are electronic books.

“I regretted rushing into signing a contract with Ravenport. I should have waited and sent out my manuscript to bigger publishers,” said Acosta.

“To allow this egregious marginalization to continue into the second decade of the 21st century is not only reprehensible but unacceptable,” Barrios wrote.

“I, too, am disappointed that there is not more diversity in this year’s line-up,” Opitz said in the letter that was also published by the Texas Observer. “It is important to the festival staff and board, and it is personally important to me that the Festival grow in diversity…In any event, there’s really no excuse,” she wrote.

The lack of diversity at the book festival is in starling contrast to the nearly 40 percent Hispanic/Latino in Texas, according to the U.S. Bureau of the Census, Population Estimates Program (PEP) as of July 1, 2012. However, some researchers believe the number of Latinos in Texas may be much higher because of Census undercounting and the difficulty of including undocumented residents.

Even two well known and respected El Paso writers; Benjamin Alire Sáenz, a Pen/Faulker award winner who has an extensive list of published novels, poetry and young adult literature, and John Rechy, the first Mexican American author to hit the New York Times best seller with his first novel, City of Night, were not included among featured authors at the book festival. And although Arte Público Press, the largest and oldest U.S. publisher of contemporary and recovered literature by Latinos/Hispanics, submitted several of its new releases for inclusion at the Texas Book Festival, the festival’s selection committee chose none of them, according to Barrios’ Op-Ed.

In a recent article Dr. Nicolás Kanellos, founder of Arte Público Press in Houston, said: “There is an awareness of Latino or Hispanic literature, even while there is insufficient opportunity for authors to publish their works.”

But, he does give new tips for Latino authors despite recent shut downs of Latino book divisions by major publishers. There are increasing opportunities to publish with non-Latino independent and small presses, according to Kanellos.

Latino and non-Latino writers alike are achieving success through smaller publishing houses and self-publishing, according to publishing experts.

For example, 12 publishers rejected J.K. Rowling’s first Harry Potter book before she found a relatively small publishing house at the time willing to give her a chance. Epublishing is also catching on.

A number of successful published authors have started their careers through epublishing. Amanda Hocking made her unpublished novel, Switched, available as an eBook on Kindle and has since sold 1.5 million eBooks. Even author E L James started with her early versions of the world-renowned Fifty Shades trilogy as eBooks prior to a publishing house picking them up.

During an interview for Poets and Writers Magazine Jennifer Ciotta, the author of the No Bulls**t Guide to Self-Publishing, notes how self-publishing has become practical and, in many cases, a desirable option for independent-minded writers.

“I self-published because I felt if I’m going to succeed or fail, I’m going to do it on my own,” she says. “I wanted complete creative and business control. Also, after studying the industry, it was apparent that new authors who are traditionally published pay for and do their own marketing and publicity anyway.”

Now that Rise of the Borderland Man is out as an eBook, Acosta plans to make it available on hard-copy so that other young border residents will be motivated by its message of hope. He is also seeking outside funding or a publisher to have it released in hard cover.

“Someone once said that art is the best weapon against violence and, unfortunately, there is a lot of violence around us,” he said. “But even then, the border area has a long and great history, and there are just so many amazing stories out there to be told…El Paso and Juárez are two very special, vibrant and creative cities that can inspire the best in of any writer.”