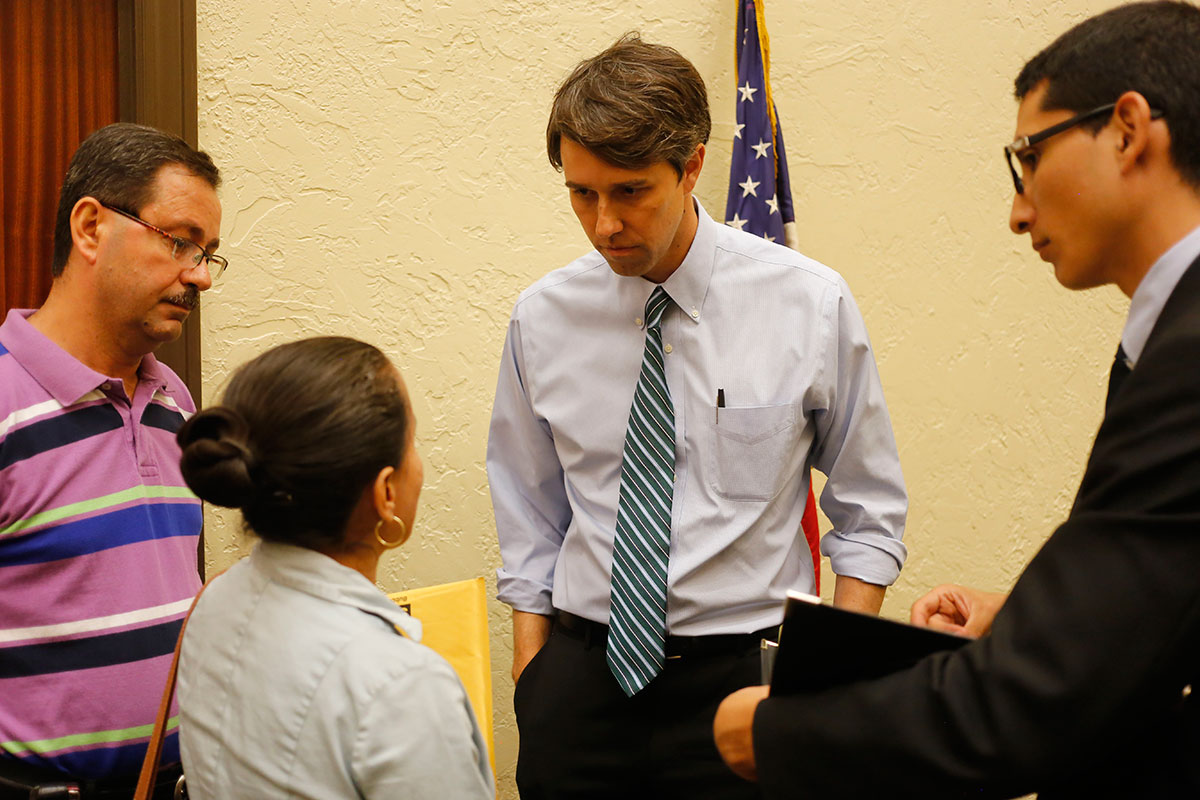 Maria Espinoza talks to Congressman Beto O'Rourke (D-Texas) about her concerns about U.S. military intervention in Syria after the town hall meeting on Sept. 2 at the Mills building in Downtown El Paso. (Aaron Montes/Borderzine) Maria Espinoza talks to Congressman Beto O'Rourke (D-Texas) about her concerns about U.S. military intervention in Syria after the town hall meeting on Sept. 2 at the Mills building in Downtown El Paso. (Aaron Montes/Borderzine)

EL PASO – Only a few of some 150 military veterans, businessmen and members of the local Syrian community attending a town hall meeting here Sept. 2 called by U.S. Representative Beto O’Rourke (D-Texas) said they supported any U.S. involvement in the Syrian civil war.

On Aug. 31, President Obama called for a congressional vote to authorize a military strike against Syrian stockpiles of chemical weapons after the government of Bashar Hafez al-Assad allegedly unleashed a chemical attack that killed nearly 1,500 of his own people.

O’Rourke said he wanted to hear from his constituents before taking part in next week’s vote in Washington, D.C. “With your emails, Facebook quotes, phone calls, letters, I feel like I can then make a decision that is in the best interest of my community and in keeping with my conscience,” O’Rourke said.

Maria Espinoza, a former Army resources specialist, said the U.S. military, especially the Army, has enough domestic problems to solve such as sexual assaults and post-traumatic stress disorder (PTSD) before engaging in another conflict. At a town hall meeting on Sept. 2, Bryan Hadaad (center) and other El Pasoans had the chance to voice their opinions about the U.S. taking military action against Syria. Congressman Betro O'Rourke called for a meeting at the Mills building days before the Congress will make their return to session next week to debate their decision whether to go to war. (Aaron Montes/Borderzine)

“I feel that until we fix the internal problem, it would be a very bad idea to go and solve their problems,” she said.

James Bonneau, a graduate of the George Washington University law school was among the few persons present supporting U.S. involvement in the Syrian conflict. He said that Syria is breaking international law by keeping and using chemical weapons.

“More than 95 percent of the countries in the world have signed or ratified the ban on using chemical weapons,” Bonneau said. He said he supported U.S. intervention because there is a need for a world police that can enforce international law. “Somebody has got to do it. We have an interest in enforcing the rules,” he said.

O’Rourke said he objected to the idea of using military force in Syria. He said he would prefer a more diplomatic or political response but had not decided on how he will vote.

“Certainly if there is a military settlement to this problem instead of a political one we are likely to see atrocities at an even grander scale,” O’Rourke said.

Do you support or oppose U.S.           airstrikes against Syria? | Create infographics