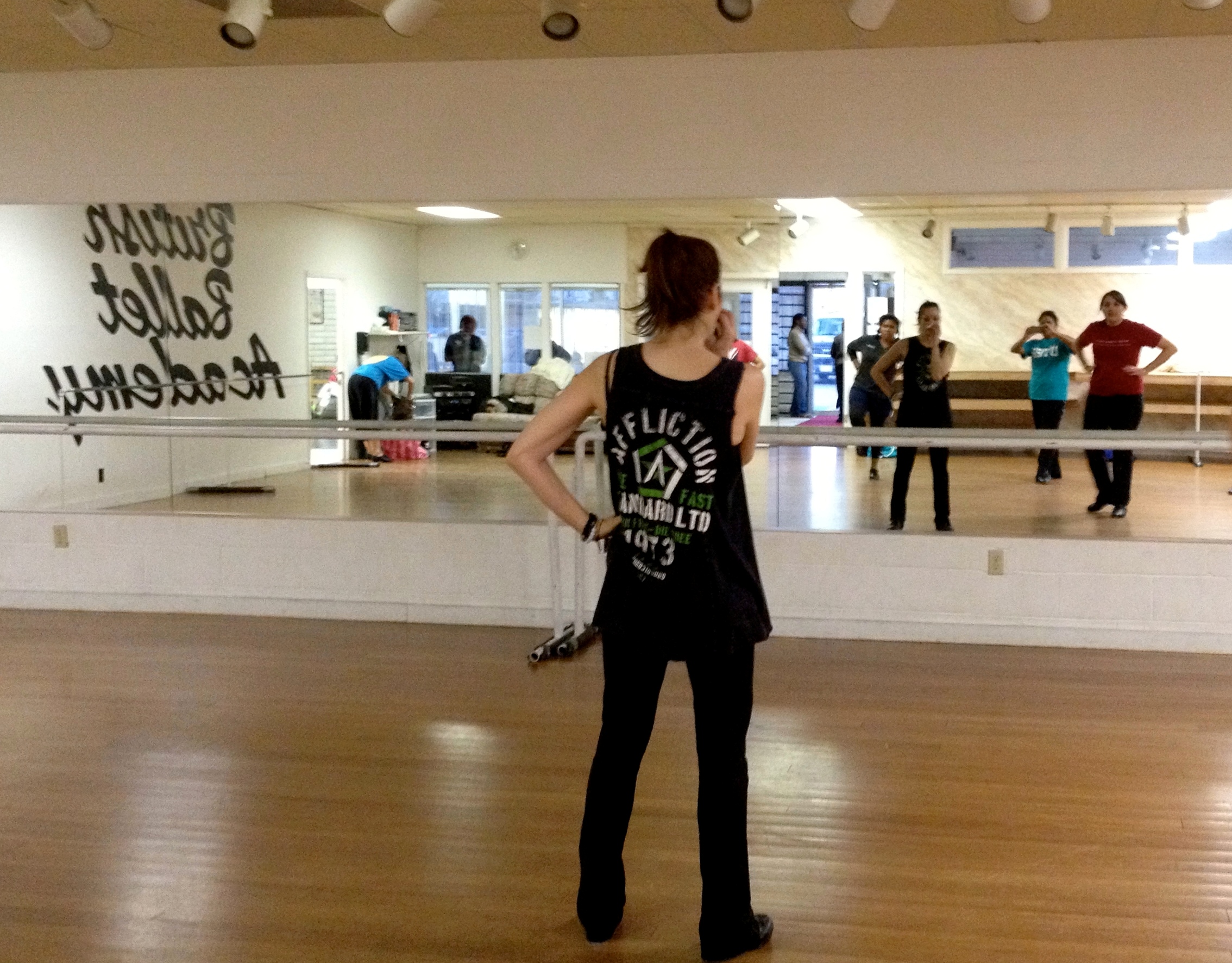 O'Connell craftily plans choreography moves in her head for all the jazz, tap and ballet classes she instructs at the British Ballet Academy of El Paso, Texas. O'Connell instructs over 300 students every week. (Photo Elisa Barraza/Borderzine.com) O'Connell craftily plans choreography moves in her head for all the jazz, tap and ballet classes she instructs at The British Ballet Academy of El Paso, Texas. O'Connell instructs over 300 students every week. (Photo Elisa Barraza/Borderzine.com)

EL PASO— A woman in her 40’s , hair pulled back, wearing a Metallica tank top and tight jazz pants creates a rhythmic percussion with her tap shoes.

She’s been tapping since the age of 13 and today Kristy O’Connell is the owner and main choreographer at the British Ballet Academy in El Paso, a goal she achieved 16 years ago.

Yet, O’Connell admits she didn’t fall in love with dance as a child. It was not until when she stepped into her first pair of tap shoes as a teenager that she knew what she wanted to do it for the rest of her life.

“You just forget about everything when you dance. It’s the greatest feeling,” O’Connell said.

After two rock videos, three NFL half-time performances and multiple dance opportunities out of high school, O’Connell realized that at $50 a performance there was not a lot of money in dancing.  She knew she had to change her lifestyle. The British Ballet Academy offers jazz, ballet and tap classes for children and adults. The academy has built a friendly and family oriented environment under Kristy O'Connell.(Photo Elisa Barraza/Borderzine.com)

She was a student and assistant at the academy all through high school and into college, prompting the owner to offer to pass the company to O’Connell.  She immediately accepted.

At the time she was in her early 30’s and already had two children of her own. The first thing she did to prepare to run her studio was to finish her dance-teaching certificate at The University of Texas at El Paso.

O’Connell remembers not wanting to be labeled as an “Ice-cream cone” due to UTEP’s dance program focusing mainly on ballet. But she still scored perfectly on every ballet test and was ready to tackle all the challenges in owning her first business.

About 80 percent of new businesses fail within the first five years, according to a study done by Inc. Magazine and the National Business Incubator Association. Although this was O’Connell’s fist business, the academy had been established for more than 10 years helping her beat those odds.

Since O’Connell took over as owner, the number of students has grown from 117 to more than 350.

At the beginning she says that she only had one assistant due to the low amount of income for payroll and she did the office work manually.

“I didn’t have a computer. I was writing everything by hand, receipts, invoices, etc. I knew what I wanted and I knew where I wanted to get, but it was going to take a while,” O’Connell said.

In the following years O’Connell’s challenge to balance a business and a family became harder. With four children, ages 5 to 16, and a husband in the Army and deployed outside of El Paso, there have been many sacrifices along the way.

“I miss a lot of their games, but that is the price of owning your own business,” O’Connell said.

Although her life comes with a hectic schedule she still turns to her one unconditional love— dance.

Ten months a year, O’Connell choreographs for 13 evening classes Monday through Thursday and mornings classes on Saturdays. This may seem like a dream job to many but O’Connell pushes the edge of the envelope a little further than many.  She also chooses to work five to eight hours on the weekends as a waitress at Michelino’s, her parent’s Italian restaurant. She uses the extra money to help pay for her children’s extracurricular activities.

Kristy O'Connell instructs her evening tap class at The British Ballet Academy in El Paso, Texas. Her perseverance has helped her thrive as owner for the past 16 years.(Elisa Barraza/Borderzine.com)

Although there are many challenges, O’Connell proudly claims she couldn’t ask for a better job.

She is participating in two tap and three jazz dances in this year’s British Ballet Academy annual recital.  O’Connell says it helps her get through the day and does not know how she would handle life without dance.

With the help of a steady teaching staff of 12 she is now very thankful for all she has gone through to get at this point in life.

Erica Barraza has been instructing and assisting at British Ballet Academy for the past seven years.  She describes how she loves working at the studio because of the atmosphere under O’Connell.

“Kristy is a great boss! I love that she very professional, doesn’t put too much pressure on you and will always help you with whatever you need,” Barraza said.

The British Ballet Academy community has created a strong kinship that O’Connell never would have imagined.

Robert Olmos, a 12-year-old student of the British Ballet Academy, said the classes that O’Connell teachers have a family-like environment.  After having O’Connell as a dance instructor for three years, he describes how she easily connects with her students.

“She is very inspirational!” Olmos said. “I like how she is very serious during class, but makes sure you are having fun and learning.”

This family environment has endured through generations, motivating many former students come back to put their own children into British Ballet Academy.

Looking back on the years she has taught at the academy, there are two things that drive O’Connell to continue, her students and the devotion to dance.

“To instill the love of dance and the respect of dance is all I can ask for,” O’Connell said.

Multimedia Journalism major at The University of Texas at El Paso.