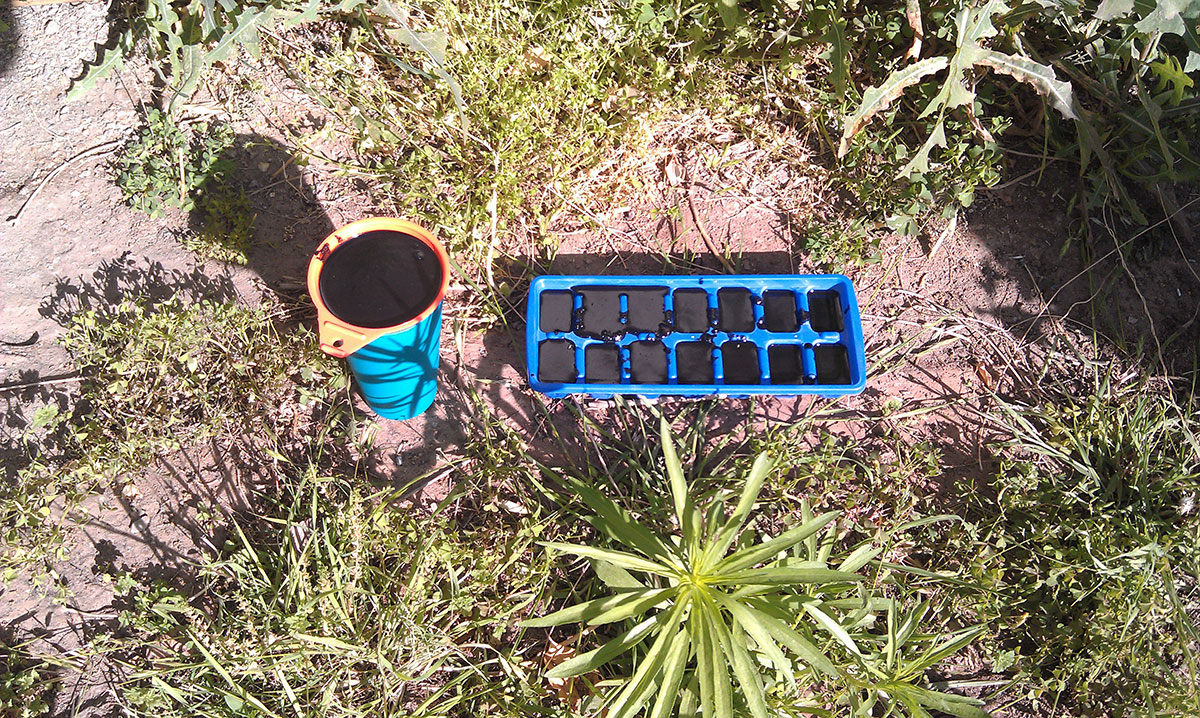 An Orgonite chemtrail buster prepared during a workshop and charged with energy from participants and the sun. (Photo courtesy of Armando Blanco)

EL PASO – Armando Blanco pours fiberglass resin into a container and begins mixing in iron shavings, quartz crystals, iron oxide and other various organic and inorganic materials. Adding a catalyst he continues mixing and then pours the black chunky mixture into ice cube trays and places them in the sun to cure.

Blanco, the founder of Orgonite El Paso, makes Orgonite, a product that he claims attracts positive energy and helps the environment. Through various art shows and local events, Blanco sells or barters his Orgonite.

Orgone energy was discovered by Wilhelm Reich, a psychoanalyst, in the late 1930s and early 1940s. Reich’s method was to place different layers of organic and inorganic materials in boxes that people could sit in. Orgone Energy helps battle the electromagnetic frequencies in the air, he claimed.

“People would sit in these little boxes made with this simple pattern of organic and inorganic substances,” said Blanco. “They would start getting cured of their ailments.”

Reich’s theory has taken a smaller size in El Paso, but the same elements are involved. According to Blanco, the Orgonite captures energy and can be molded into various shapes and forms.

Blanco began selling Orgonite six months ago and at first it was not that easy.

“I started off at the swap meet and that was horrible. Everybody is just there to browse and not really buy,” said Blanco. “It was pretty difficult at first to get it going.”

At this time, Blanco was still new to the idea of Orgonite. It was not until he attended an art show where he felt more comfortable and it was there that it really made a hit.

Customers say they can feel tingling in their shoulders when they hold the piece of Orgonite. Those new to the subject are skeptical.

“Some people dismiss it right away when they hear about it,” Blanco said.

The potency of the Orgonite is important, he said. The more potent the piece the better is will be helping your positive energy and the environment around you, he said.

“You want to make it as dense as possible,” Blanco said. “So I pack it as much as possible.” Blanco uses a fiberglass resin and a catalyst that helps harden the material. A lot of trial and error goes into making the Orgonite pieces.

“If you add too much while it’s hot it will literally freeze while your pouring it,” Blanco said. “If you don’t add enough then it will just be gooey and it won’t harden for months.”

He has a wide array of different types of pieces of Orgonite from ones that shaped like dinosaurs to ones that are not as aesthetically pleasing.

“I make really intricate ones and then I make basic ones…they are not aesthetically pleasing,” Blanco said. “These are the ones you want to put behind your antenna or something.”

The cost of making and selling Orgonite varies on the materials used and the amount of labor that goes into making it.

“I’ll make them real intricate and I’ll make them in multiple layers,” Blanco said. “Then I have to sand it down, polish it, sand it again, and polish it… so a lot of energy goes into it. The price value of it goes up.”

There are pieces that are not aesthetically pleasing will cost 20 cents to make and the more intricate centerpieces will cost more. Blanco’s repeat customers will special order pieces of Orgonite. The prices range from $1 to $35, depending on the size.

“The returning customers will usually bring an object for me to encase in it,” Blanco said. “Something personal for them like a guitar pick, a ring. Or a lucky poker chip.”

He advises people to put their cell phone in another room if possible to combat the electromagnetic frequencies emitted. He gives small pieces of Orgonite to friends and customers to place under their pillows.

Virginia Galarza a customer of Blanco’s and an Orgonite workshop attendee followed this advice.

“We talked about me having a migraine,” Galarza said. “I bought a piece. He told me to put it beneath my pillow… and I have had one migraine.”

Michael Abeyta, attended a Permaculture event at Caruso Park where Blanco held an Orgonite workshop, he believes handmade gifts are great and will give the pieces of Orgonite he helped create at the event to friends and family.

“Orgonite I feel like it’s a perfect gift because its like meditation, it transcends all barriers,” Abeyta said. “Orgonite purifies everything.”

While Blanco said he couldn’t say for sure that Orgonite is not the main element in good health, he says that it definitely is a factor.