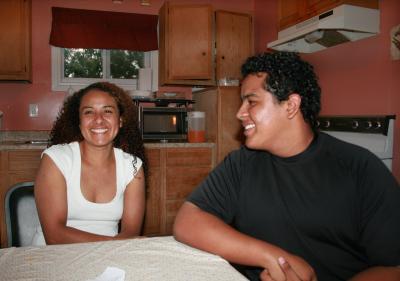 Often when a family moves to the United States, the children learn English in school but continue speaking Spanish at home. The learning process is enjoyable for some, especially young children, but can be more challenging for others.

Kindergarteners Xochil and Jerandy Muñoz said learning English is fun, and the teachers are helpful. They attend South Side Elementary School in Johnson City, Tenn. and have translators and classes to help them learn English. They speak Spanish in the home but get plenty of practice with English in school.

However, some students still struggle while learning a new language.

Hebert Valdez, 15, moved to Johnson City, Tenn. from Mexico when he was 10. It took him two years to learn English. He primarily practiced it in school because his mother could speak very little English.

“I cried the first day of school because I didn’t know anything,” said Valdez.

For young children, the learning process is easier because their brains are still developing. It can be much more challenging for adolescents and adults. Sentence formation and word order become set in their brains. Changing word order of the parts of speech – indirect object, verb, noun, adjective, personal a, then the name of the recipient to adjective, noun, verb, indirect object – seems senseless and backwards.

If language learners are stay-at-home parents or work only with Spanish speakers, they have virtually no place to practice what they learn. In school, students practice every day or every other day and have a variety of professionals to help them.

When English learners can only practice once a week and occasionally study at night, they may become frustrated. It can be especially difficult when surrounded by people who see the language barrier as a nuisance and a fault and cannot sympathize with speakers of a language other than English.

Kyle Fleener, 25, went to Ecuador with the East Tennessee State University summer study abroad program in 2012. He left Tennessee knowing very little Spanish and learned first-hand about being what he called “the odd man out.” Although English is the primary language spoken in the United States, America does not have a declared national language. In fact, a large part of the American population descended from immigrant families from many nations.

Christina Romero, 28, grew up speaking English. Her grandparents on her mother’s side are Hispanic, but her parents refuse to learn Spanish because English is their first language. She said their attitude is that they are in America, and they speak English.

Romero said that her mother always says, “If I was in their country, I would learn their language, but they are in my country, so they need to learn mine.”

Elba Muñoz, 36, is the mother of the kindergarten students at South Side School. She said that because she does not speak English, people sometimes deny her help at the store, at the doctor and at work.

“Sometimes people help us, and other times they resist us and discriminate against us,” said Muñoz.

Muñoz works and finds the time each week to attend a class at East Tennessee State University, but feels that until she is fluent, people will discriminate against her.

Some people of Hispanic descent choose to learn Spanish though their native language is English.

Romero said that she wanted to learn Spanish because many Spanish-speaking people in her neighborhood couldn’t talk to her, and she wanted to talk to them. She wanted to perfect it for the sake of her daughter.

“How can I expect her to learn culture if I do not?” asked Romero. Her daughter speaks both languages at four years old.

Some are resistant to learning a new language because they take pride in their culture and native tongue. Many simply do not have the time to learn, or they do not know that bilingual programs are available.

Lorena Valdez, Hebert’s mother, has lived in Tennessee for five years and speaks fragmented English. She said that she feels at home speaking Spanish but that if she were fluent in both, she would speak them in her home.

There are many ways for people to learn a new language. They can take classes in school, at a university, or with a tutor. Free programs are available through churches and some universities. People can also use the Internet, software programs like Rosetta Stone or textbooks to teach themselves.

“Many want to learn it to be able to function at their jobs and in society,” said Kristen Oliver, 20, an in-home English instructor.

Oliver said she teaches a family whose children only speak English but continue to maintain their Mexican culture.

“I think they can preserve their culture and customs and still learn English,“ Oliver said. “I think it is important for them to preserve their customs but that it is possible to do it as an English speaker.”

“Cultural heritage can be passed on without learning the native language, but it doesn’t matter too much because we live here now,” he said.